The first we really can be sure of is that a Mr Denyer first called it Denyer's Victoria in 1837, the same year that Queen Victoria began her long reign as queen of England.


Not known, it has been widely cultivated in the UK from 1847 onwards. It was awarded a First Class Certificate by the RHS 1973, awarded an Award of Garden Merit by the RHS in 1993 which was again confirmed in 2013.

The fruits start off as green turning to an orange / red colour and then finally a purple / dark red. The significance of the colour change from orange / red to purple / dark red is important because the Victoria plum is both a cooker and an eating variety. When the colour is orange / red the plums are at their best for cooking. They have good acidity and texture which is ideal for pies, jams and preserves. See the picture below for the correct colour for this usage. When cooked this plum variety breaks down easily with a full plum taste with an almond scent in the background. 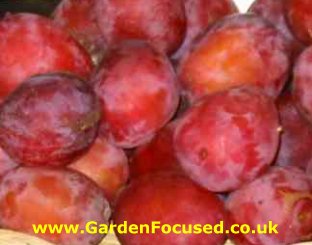 Victoria plums ready for cooking use

When the plums turn a much darker colour (as shown in the picture below) they are at their peak for eating. At this stage the sugar content of the fruit has increased significantly making them much tastier to eat raw. Even at this stage the plums can only rate as good eaters, they will never be one of the best plums to eat raw but see further down this article for reasons to grow this variety. After picking the fruits will keep for about a week. 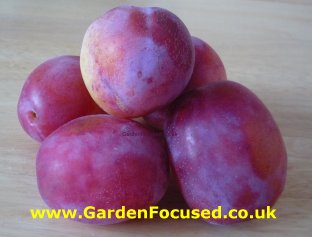 The size of the individual plums varies but on average they are about 5cm / 2in long and 3cm / 1½in wide. This makes them just slightly larger than the average plum and weighing in at an average 45g. The fruit flesh is dark yellow / gold, grainy, firm and with lots of juice, it has a medium sized stone. The blossoms are white and the leaves are a very average green colour.

Our advice, regarding rootstocks, for growing a Victoria plum tree in most conditions would be the St Julien A rootstock. You'll get a decent sized, relatively vigorous tree which won't swamp the average garden. If your garden is on the small size it may be worth thinking about a Pixy rootstock. However, even in a smallish garden we would suggest that an appropriately pruned Victoria plum tree on Julien A rootstock would be your best bet.

Your tree should produce a small crop two to three years after it has been planted and will reach its full-cropping capability five years after planting.


Victoria plum trees are the most commonly bought and grown plum tree in the UK. If any garden centre / online supplier sells a plum tree they will almost certainly sell the Victoria variety. This gives you an enormous choice of suppliers both online and in the High Street.

Specifically for Victoria plum trees we would suggest the following pruning regime which will be better suited to their known weaknesses:


Victoria plum trees are susceptible to all the pests and diseases of which attack plum trees and for a comprehensive list of symptoms and cures see our plum tree pest and disease page. It is unfortunate however that Victoria's do have a reputation, and quite rightly so, of suffering from the following problems in particular:

The classic signs of canker are:

For treatment and prevention of canker in Victoria plum trees read our detailed page here.

The classic signs of Silver Leaf Disease are:

This disease is more common on Victoria plum trees because over-production of fruit often causes branches to break in late summer / early autumn and if not dealt with immediately the break points provide easy access for the Silver Leaf Disease fungus to enter the wood. For treatment and prevention of this disease read our detailed page here.

The signs of Plum Moth are:

This is a pest which seems to particularly affect Victoria and Czar plum trees. It is not good news because it is particularly difficult to treat. See here for more details.

The signs of Brown Rot are: 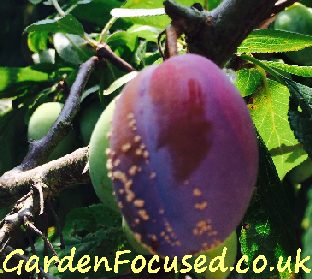 Brown Rot on a Victoria plum

The sooner you take action the better chance you have of minimising the damage. See here for more specific details about brown rot of plum trees.


Victoria plum trees are self-fertile and will produce a more than adequate crop of plums on their own without any other plum trees nearby. If any fruit tree sellers tell you otherwise they will simply be trying to sell you two plum trees where in truth, a single tree of this variety will do fine by itself. However, this variety, in pollination group 3, makes an excellent pollinator for the following other plum trees:

TASTE AND TEXTURE: Sweet and juicy when fully ripe

POLLINATION: Self fertile, does not need a pollination partner

FLOWERING AND FRUITING TIMES:
The average flowering time (optimum time for pollination) and date when fruits are ripe in the UK for the Victoria plum tree are set out below. If you have set your home town we can give you a more accurate estimate, if you have not set your home town (do it now by clicking here) the dates below will be the average for the UK.

Your town has not been set, the average main flowering time for your Victoria plum tree in the UK is the third week of April. Fruit will be ready for picking in the third week of August. Click here if you want to set the dates to your home town.