By David Marks
Some experts in the world of plums claim to be able to distinguish a plum from a gage but in reality the distinction is so blurred that it's wiser to avoid entering into that discussion. The Jefferson plum / gage is a perfect example of the problem, it has some of the so-called qualities of a plum and some of a gage. We'll call it a plum for the purposes of this article.

Forget its classification, this is a superb tasting plum which is tops as far as sweetness and texture are concerned. It stands out from other plums because it crops over a long period of about ten days which is unusual as far as plum trees are concerned


The parents of Jefferson are unknown, it is believed to be a seedling with one of the possible parents being Coes Golden Drop. It originated from Albany in New York, this is decidedly American and was imported to the UK in 1841.

APPEARANCE, TASTE AND CHARACTERISTICS OF JEFFERSON

Jefferson is a tree with medium to vigour so it does best of a St Julien A rootstock if you want a manageable tree of about 4m/ 13ft height, less if pruned slightly harder than normal. Grow it on a less vigorous rootstock such as Pixy or VVA-1 and it will be a perfect container grown tree.

The fruits have a slightly tough skin but the inside is one the juiciest and sweetest of all. The texture is reasonably firm keeping most of the juice in your mouth rather than on your chin! This really is in the top five plum trees as far as taste is concerned. 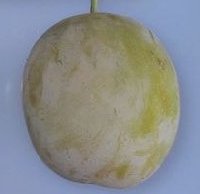 The skin is a dull green / yellow and despite the description this an attractive looking plum. The flesh is a similar colour and slightly on the firm side. The stone in the middle is smallish and easy to remove. The overall size of the plum is about average.

In a typical year the fruits will ripen over a ten day period making this one of the longer cropping varieties of plums. This is ideal because it extends the cropping time and avoids the glut so common with most other varieties. 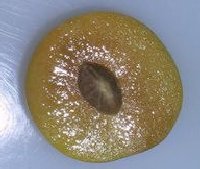 Jefferson is in pollination group 2 and cannot fertilise itself therefore needs a suitable pollination partner. Czar, Denniston's Superb, Marjorie's Seedling, Victoria and Warwickshire Drooper are well known varieties which will pollinate Jefferson very well. See the end of this article for when it will blossom and produce fruit in your area of the UK.

Avoid growing this plum tree in the coolest parts of the UK because it does not appreciate very late frosts. But anywhere with a general climate similar to the Midlands and southwards will suit it just fine. 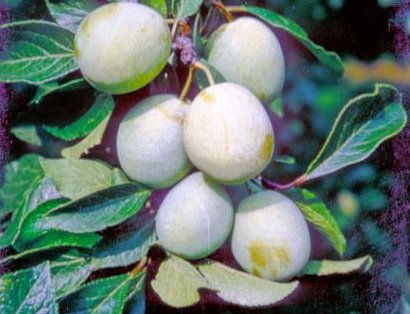 REGULARITY OF CROPPING: Produces a good crop most years

SPECIAL FEATURES: Superb taste and texture as an eating plum. Crops over a longer period compared to most other plum trees

The average flowering time (optimum time for pollination) and date when fruits are ripe in the UK for the Jefferson plum tree are set out below. If you have set your home town we can give you a more accurate estimate, if you have not set your home town (do it now by clicking here) the dates below will be the average for the UK.

Your town has not been set, the average main flowering time for Jefferson in the UK is the second week of April. Fruit will be ready for picking in the fourth of August. Click here if you want to set the dates to your home town.