By David Marks
The Warwickshire Drooper is a superb plum tree to grow in most parts of the UK. It has lovely looking yellow skinned plums which are slightly smaller than average, two small bites of heavenly taste. Kids love them because they are on the sweet side when mature and the yellow flesh comes away easily from the stone. The stone is on the small side.

If you pick them before they are fully ripe they are firmer and make excellent cooking plums. Make no mistake this is one variety that really does cook well but at the same time makes a delicious eater. This extends the period of usefulness.

This variety was grown commercially by orchards in Warwickshire and the surrounding areas and was initially believed to be known as the Magnum. Even this is not certain because in the Midlands there are several plums trees containing the name Magnum. What is certain however is that in the 1940s it became known by its current name the Warwickshire Drooper.

ALL ABOUT THE WARWICKSHIRE DROOPER

When grown in commercial orchards this variety was typically grown on its own roots which made for an very large tree. To propagate the trees they would cut away the suckers and plant those. Nowadays however a smaller tree is more suited to modern gardens and the Warwickshire Drooper is commonly grown on the St Julien A rootstock which limits its size to 3m / 10ft at maturity.

Some plum tree varieties tend to miss the odd year for fruit production but this variety very rarely does that. Not only does it consistently produce a crop every year but the the crop is also a very large one 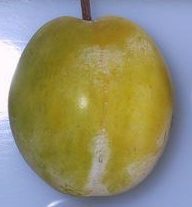 We love the taste of Warwickshire Drooper, left to mature on the tree it's sweet and has a true plum taste. The fruits are "two-bite sized" making them ideal for adults and kids. The flesh is not the juiciest but it retains a bit of texture with the juice held within that.

This is a true multi-purpose plum variety which makes an excellent cooker when picked a week or two before it is ripe. At the same time it is a delicious eater and will retain fruits on the tree for three weeks or so. This is one quality missing from many other plum trees. 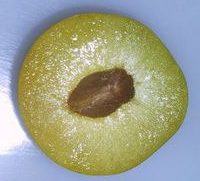 The plums are ready for eating slightly late in the season (see below for more specific details) and is in pollination group C making it an ideal pollination partner for many other varieties. It is self-fertile and although it will benefit from a pollination partner it does still produce a large crop when on its own. Late frosts can occasionally damage the blossoms but this is rarely a problem. We have seen this variety grown in the Midlands through some harsh winters without any ill-effects.

This variety is self-fertile although another suitable plum tree nearby (Victoria does well) will increase the yield. The pollination group is 2 and the blossoms suffer very little from late frosts. It is suitable for all but the coldest parts of the UK. It is one of the few plum varieties which has some resistance to bacterial canker.

All the normal pruning rules for plums apply to this variety but even with with its drooping habit and heavy crops, the branches are very strong growing and unlikely to break under the weight of the fruit.


Warwickshire Drooper plum trees are in pollination group 2 and are self-fertile They will pollinate the following other varieties:


This variety is sold by several online stockists and is not difficult to find. It is however unlikely to be found in garden centres although a few in the Midlands do sell it.

One supplier of this tree which did stand out for us was Walcot Organic Nursery. Not only are their prices the best we could find for this variety but the trees also have organically grown accreditation from the Soil Association.

USE: Both eating and cooking and it does a supremely good job at both

TASTE AND TEXTURE: Firm when picked early as a cooker, sweet and delicious when allowed to ripen

FRUIT SIZE: Slightly below average, great for kids and adults

TREE SIZE: Slightly larger than average depending on rootstock and conditions

REGULARITY OF CROPPING: Very regular with a heavy crop

FLOWERING AND FRUITING TIMES:
The average flowering time (optimum time for pollination) and date when fruits are ripe in the UK for the Warwickshire Drooper tree are set out below. If you have set your home town we can give you a more accurate estimate, if you have not set your home town (do it now by clicking here) the dates below will be the average for the UK.

Your town has not been set, the average main flowering time for Warwickshire Drooper in the UK is the second week of April. Fruit will be ready for picking in the last week of August. Click here if you want to set the dates to your home town.