By David Marks
Avalon is a relatively new variety of plum tree which was bred to be better than Victoria. In many aspects, notably taste and disease resistance this is a far superior variety. In one area however it falls below the standards of its rival and that is in its ability to grow well in adverse and cold conditions.

For Avalon to thrive it needs average or good conditions and it does best when it is in a protected position.


Not known, it was bred at Long Ashton Research Station (which closed in 2003) in Bristol and was first released to the market in 1989 making this one of a select few of the recent plum tree varieties.


Many descriptions of the Avalon plum tree claim that it is similar to the Victoria plum tree but in fact there are very significant differences between the two in taste, texture, fruit and flower production times, fertility and most importantly the conditions where it grows best. The connection between the two is really only limited to the stated intention of the breeders - to produce a plum tree better than Victoria.

As the plums ripen they first turn a pink-red colour and at this stage they are ideal for cooking use including making plum jam. The stone in the fruit comes away cleanly from the flesh making de-stoning an easy operation prior to cooking. We think Avalon makes some of the best plum jam ever. 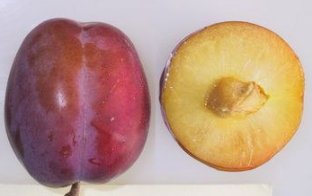 The fruit then ripens further and turns a deep purple-red colour, at this stage they are one of the best eating plums ever, certainly better than Victoria. Individual plums are just slightly larger than normal (5cm / 2in long and 3cm / 1½in wide on average) and of oval shape.

Avalon is not the fastest variety to produce fruit when it is initially planted, it can take a year longer to get going compared to other varieties. Once established it crops well and regularly. It can over-crop and this can have two undesirable effects the first of which is that a large number of the fruits do not develop to full ripeness. The second effect is that the sheer weight of the fruit can cause branches to break. Both of these can be avoided by correct pruning - see further down this article for advice.

Our advice, regarding rootstocks, for growing an Avalon plum tree in almost all conditions would be the St Julien A rootstock. You'll get a decent sized, relatively vigorous tree which won't swamp the average garden. If your garden is on the small size and your soil is well-drained and nutrient rich it may be worth thinking about a Pixy rootstock. However, even in a smallish garden we would suggest that an appropriately pruned Avalon plum tree on Julien A rootstock would be your best bet.

Your tree should produce a small crop three years after it has been planted and will reach its full-cropping capability six years after planting. Unlike Victoria, Avalon should not be planted in exposed conditions.

Specifically for Avalon plum trees we would suggest the following pruning regime which will be better suited to their known weaknesses:


Avalon is admirably resistant to diseases which affect plum trees in general but if your tree has problems then consult our pest and disease page.


Avalon is available in larger garden centres and those which specialise in fruit trees. It is not normally available in supermarkets and diy centres. It is widely available online and we would recommend Blackmoor who, from our own personal experience, have good prices, prompt delivery and offer a personal service if you have any queries. Click here for the page where they sell this variety.

TASTE AND TEXTURE: When fully ripe it's sweet with a hint of background acidity, top quality. The skin is slightly thicker than average

Your town has not been set, the average main flowering time for your Avalon plum tree in the UK is the last week of March. Fruit will be ready for picking in the second week of August. Click here if you want to set the dates to your home town.

Flowering and fruit production dates vary according to the weather in any particular growing season so the above dates may well change slightly from one year to the next. The flowering date above is when the plum tree produces the maximum number of blossoms, it will also produce blossom, although less, a week or two either side of the date given.