By David Marks
A cross between a gage and a plum, Opal has taken on the full sweet flavour of the gage side of its parents but with a slightly larger fruit. Plums are produced early in the year, late July in some areas, and continues for nearly ten days. The skin, marked with purple and red looks just ready for eating when ripe.

Far better disease resistance compared to most other varieties combined with vigorous growth makes this a plum tree that is suited to many areas of the UK.


Opal is a cross between Early Favourite and Oullins Gage. It was bred in Sweden and released in 1925.


Opal is a very rustic and attractive looking plum when ripe, with a yellow background overlaid with reds and purples. The flesh is a light gold colour with a small stone which comes away easily. The flavour is delicious, more like a gage than a plum, sweet and juicy. Individual plums are an average size. Picked straight from the tree its probably the best tasting of all the plums.

Another added bonus is that the crops mature on the tree over a two week period, longer than normal. The crops are large and you need to keep a watch that it doesn't over-crop (see pruning below). It produces fruit early in the year, a week or so earlier than Victoria. Because this is an early variety it does best when grown in full sun to give the fruit enough sunshine to develop fully. 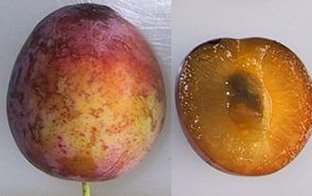 Opal plums are grown to be eaten straight from the tree but they also perform well when cooked for jams or some pies. It does have a lot of juice so if you are looking to cook a classic plum pie we suggest that the drier Belle de Louvain is better. Opal does however make excellent plum crumble, our quick, cheap and tasty recipe can be found here.

Our advice, regarding rootstocks, for growing an Opal plum tree in almost all conditions would be the St Julien A rootstock. You'll get a decent sized, relatively vigorous tree which won't swamp the average garden. If your garden is on the small size and your soil is well-drained and nutrient rich it may be worth thinking about a Pixy rootstock. However, even in a smallish garden we would suggest that an appropriately pruned Opal plum tree on Julien A rootstock would be your best bet.

Your tree should produce a small crop three years after it has been planted and will reach its full-cropping capability five years after planting.

Specifically for Opal plum trees we would suggest the following pruning regime which will be better suited to their known weaknesses:


Opal is admirably resistant to diseases which affect plum trees in general but if your tree has problems then consult our pest and disease page.


Opal plum trees are in pollination group 3 and is self-fertile and will produce a good crop without any other plum trees nearby. It will successfully pollinate the foloowing other plum tree varieties:


Opal is available in larger garden centres and those which specialise in fruit trees. It is not normally available in supermarkets and diy centres. They are also widely available online.

UUSE: Primarily eating but can also be used as a cooker

TASTE AND TEXTURE:: When fully ripe it's sweet

Your town has not been set, the average main flowering time for your Opal plum tree in the UK is the third week of April. Fruit will be ready for picking in the first week of August. Click here if you want to set the dates to your home town.

Flowering and fruit production dates vary according to the weather in any particular growing season so the above dates may well change slightly from one year to the next. The flowering date above is when the plum tree produces the maximum number of blossoms, it will also produce blossom, although less, a week or two either side of the date given.