IDENTIFY AND TREAT SILVER LEAF DISEASE IN THE UK

By David Marks
Silver Leaf disease can affect a variety of trees. This page page deals specifically with plum and cherry trees because the pruning rules are the same for both.

The technical name for this disease is Chondrostereum purpureum which is a fungal infection of tree wood. Useful to know if you do more research after reading our article.


There are three sections to this article:


The symptoms of Silver Leaf disease need to be investigated carefully because the treatment can be quite drastic and the disease can be mistaken for environmental conditions. Use the next couple of paragraphs to positively identify this disease. The key symptoms are: 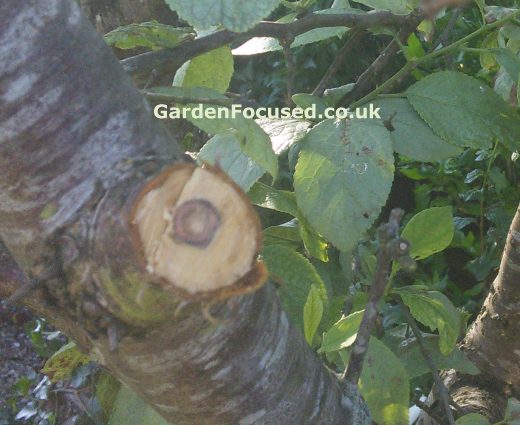 The leaves of an infected tree are not infected by this fungus it is only the wood which is infected. The silver sheen to the leaves is caused by the top layer of the leaves separating from the layer below as a reaction to the fungal infection in the bark. When the two layers separate light is reflected differently making the leaves look a different colour. 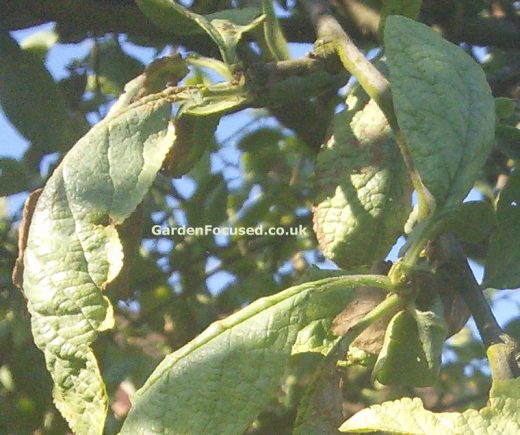 Leaves with a silver sheen to them

It is important to realise that a silver sheen to leaves is not always caused by Silver Leaf disease. It can also be caused by environmental factors such as late frosts when the leaves have formed. Always look for other signs of the disease as well such as the marks in the wood or dead / dying branches. Also, environmental factors tend to affect the majority of leaves on the tree very quickly whereas Silver Leaf disease tends to be restricted to areas around the infected branch although if left untreated it will spread beyond that area.


Treatment of Silver Leaf disease is based on the following factors

The treatment for Silver Leaf is simple but brutal. All infected wood needs to be cut back to healthy wood - about 3cm / 1in further than marks in the wood. All prunings should be burnt to avoid re-infecting the tree and other nearby plants.

In some cases Silver Leaf disease cures itself but there is no known reason why this occurs. The choice between hard pruning and leaving the tree to fend for itself is yours. If there are other susceptible tree / plants nearby then in almost all cases, hard-pruning is the only option to avoid the risk of the disease spreading.

If you end up with the situation where you prune branches away and they are still marked at the point where they join the main trunk of the tree then it's really time to give up, dig up all the tree including roots and burn everything.

Silver Leaf Disease can be transferred from one tree to another by using unsterilised saws, secateurs etc. So be sure to sterilise all pruning tools after using them. Jeyes Fluid is an ideal and cheap cleaning solution. Leave it on the tool surfaces for 20 minutes and then rinse or wipe off.

Preventing Silver Leaf disease is simply a matter of caring for the trees as best as you can, see our article on caring for plum trees. Key to this care is pruning your plum or cherry tree at the right time of year. Late May to mid July are the best times to prune plums and cherries if you want to minimise the risk of infection. As soon as you get into August the risk of infection increases as time passes. Pruning in late summer and autumn also deprives the tree of the goodness stored in the leaves which may reduce its health in subsequent years.

One plum tree in particular is prone to this disease and that is Victoria, and in particular when grown on the "Brompton" rootstock. The rootstock "Pixie" has good resistance to Silver Leaf even for Victoria plum trees. It is dwarfing, very widely available and an excellent choice.


Silver Leaf is a fungal disease that is active above freezing temperatures and spreads through spores which are windborne. The key lifecycle stages are:

There's no hard evidence about whether it's OK to replant a new plum tree in the same place where a tree has previously been infected with Silver Leaf. Possibly the reason for this is that most experts would not recommend planting a new fruit tree in the same position as a previous one whatever diseases have been present. So the short advice is no, don't plant in the same position. If there is no other alternative make sure all of the stump of the old tree is removed including the roots and replace as much of the nearby soil as possible with new soil.

If you have any questions about Silver Leaf Disease or general comments about this article, use the form below to send them to us. We will get back to you as soon as possible.