When and How to Sow Tomato Seed

By David Marks
Crimson Crush is a new variety of tomato first released for sale in January 2015. Without doubt its main claim to fame is that it is reputed to be 100% resistant to blight. If this proves true it will be a unique quality in the tomato world!

In 2015 we grew this variety outdoors in a medium sized container and we can confirm that it does well in these conditions. Other reports indicate that it grows equally well in a greenhouse. The report below covers the 2015 growing year and the pictures are of our own Crimson Crush plants.


Below we give three opinions about how this variety of tomato can be grown. The first opinion is from Suttons who are the only ones selling this tomato in the UK and therefore must have trialed it. The second opinion is from the RHS who do not claim to have grown this tomato variety in their article about it. The third opinion is ours and we definitely did grow it in 2015. 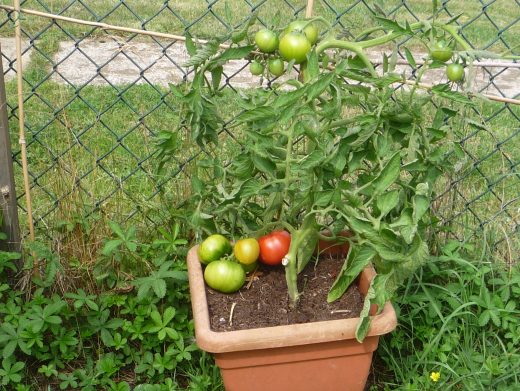 SUTTONS
We quote from their sales page about Crimson Crush, "Cordon variety - one stem grown by pinching off side-shoots as they appear, needs staking and tying in". Given the fact that Suttons are selling this variety in the UK you can assume that they have experience of how to grow it.

RHS
We quote from the RHS page about this variety, "Crimson Crush is a standard indeterminate tomato". Note that the terms "cordon" and "indeterminate" mean one and the same thing. It is clear from the RHS article that at the time of writing they were not drawing on their own experiences, simply quoting the opinions of Suttons Seeds.

OUR OPINION
We grew the variety Crimson Crush in 2015 and again in 2018, as shown by all our pictures of it on this page. We took the advice of Suttons and grew it as a cordon variety and this worked well. However it does appear to us that this variety does not produce an inordinate amount of leafy side shoots and might well do fine as a bush / determinate variety.

We will test out that theory in 2017, but can report that, others we know of have successfully grown it as a bush variety with little or no pruning of the side shoots.

For all the tomato varieties which we have fully reviewed, click the drop down box below, select a variety and then click the More Information Button.


Crimson Crush is large tomato as can be seen in the photo above. It's not beef steak sized but definitely larger than your average tomato. The skin is very attractive shade of red, looking just like the idea most of us have in our head of how a real tomato should look. 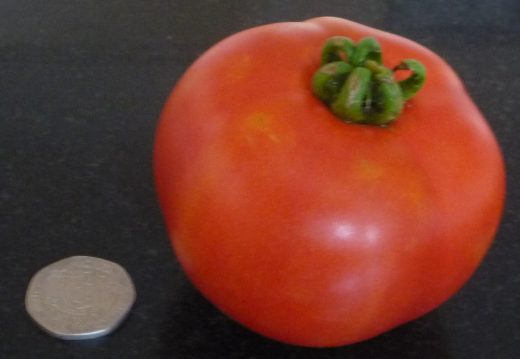 Overall it's round shaped but it does tend to have the odd lump and bump here and there. It is, for example, not the perfectly smooth shape you might expect of an Alicante or Shirley tomato. We rather like the colour and shape, this tomato has style and character without looking mis-shapen.

The taste was a big surprise to us. We would expect a seed company to wax lyrical about their own tomato varieties but the hype rarely lives up to reality. In the case of Crimson Crush it does live up to expectations and certainly exceeded ours.

The taste is of a very full flavoured tomato, sweet overall, but with just enough background acidity. The first thought which sprang to mind was that it tasted just like those field grown tomatoes you get in Spain, Greece and Italy - it definitely has depth of flavour. And remember, the plant we grew was in a container not in the open ground. Crimson Crush gets full marks from us for flavour.

Because this is a largish tomato our first test was to slice it. After all, you can pop a Sungold tomato in your mouth and eat it like a sweet. But try the same with a Crimson Crush and you would end up looking like a bloated version of Orville the Duck and probably not be able to close your mouth for rest of the day. It sliced perfectly with a sharp knife. 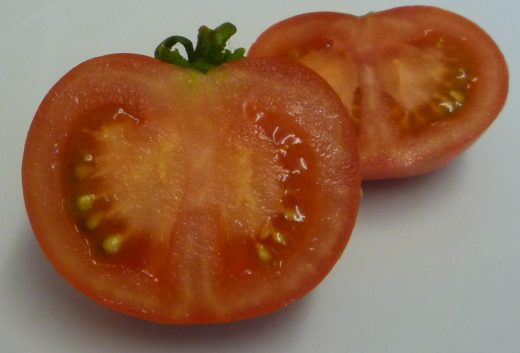 The texture is firm but at the same time, when you bite into it, there is lots of juice. The skin is about average, neither thick not thin.

This variety was first introduced in 2015 so there has been no opportunity to evaluate its pest and disease resistance over the long term. This section is based on our own experience in 2015 and others we know who have also grown it.

The first topic has to be blight resistance because in the sales pitch Crimson Crush is described as "the world’s first fully blight resistant tomato". As far as we are aware 2015 was relatively free of tomato blight, certainly none of the tomatoes we grew were affected by it.

That leaves the question of blight resistance open to further testing before any firm conclusions can be drawn. However, recent comments by Simon Crawford, one of the developers of Crimson Crush, have uncovered some reasonably solid evidence that blight resistance is extremely high. Simon Crawford has made the following comment:

"Crimson Crush remained relatively free of blight but it is not immune, showing around 10 percent of infection when controls such as ‘Ailsa Craig’ were 100 percent infected".

In other comments he also confirmed that although this variety can be infected with blight under trial conditions, the blight does not spread to the fruit. Further, intentionally infected leaves do not spread the infection to other leaves, the plant still grows successfully.

As far as other diseases and pests are concerned in our one year trial, this variety suffered no visible problems at all. Remember though, that's only for the trial period of 2015. Still, it is looking remarkably encouraging.

As far as plant vigour is concerned there are mixed stories. Most report a reasonably strong growing plant although a few report that growth is on the weak side. The plants we grew were freebies from Dobies and were delivered late in the growing year. In fact we were concerned that it was too late in the year for a crop to be produced.

But a crop was produced as our pictures show, albeit on rather small plants. As at August 2015 we can report that we have harvested two large tomatoes per plant and our current estimate is that each plant will produce around eight large, ripe tomatoes by mid September plus around four to five orange / green ones which we plan to ripen on the windowsill.

Given that the plants arrived late in the year, we are confident that seeds sown or plug plants planted earlier, as normal, will produce a significantly larger crop. Not bad at all considering the size of the tomatoes.

A reader of GardenFocused, Alan Box, National Trust Volunteer, Kitchen Gardener, Scotney Castle, sent us his experiences of growing Crimson Crush in 2015 and 2016. This is reproduced below:

I have read your article on this interesting tomato variety and would like to pass on briefly my observations and photos which I hope will interest you. In 2015 the plants were extremely prolific producing an enormous crop from six plants in open ground.

I was not particularly impressed by the taste of the fruit and found the skins a trifle tough. They certainly did not get blight, but nor did the other varieties grown near by. I also don't recall our potatoes suffering especially.

This year I am trying grafted versions of C. Crush and the new C. Cherry. The plants obtained from Dobies which arrived around May 10th were quite small and had a disturbing amount of vigorous root emanating from the scion into the compost. These roots were cut of as they would compromise properties of vigour and disease distance of the rootstock.

Although these plants were initially small and feeble the rootstock appears to be doing its stuff and the plants are now romping away. However I am still a little concerned by the possibility of scion root re growth. 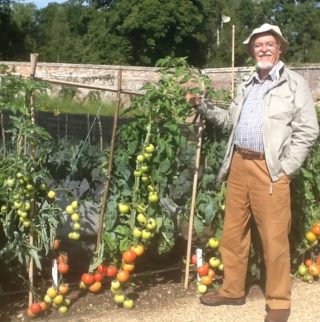 Thanks Alan, your contribution is appreciated.

F1 OR OPEN POLLINATED?: Claimed to be an F1 plant. If this true it will not grow 100% true when raised from saved seeds. The extent of the difference is not known. Note: it is not clear if it is legal to grow Crimson Crush from cuttings. We can see no indication that any company has breeders rights at the time of writing but that does not mean that none exist. You would need to check that out for yourself.

GROWTH TYPE: Cordon but see the comments above

WHERE TO GROW: Outdoors does very well and also in a greenhouse.

USE: Salad tomato, can also be used in sauces

STORAGE: They ripen well indoors when picked before maturity

REGULARITY OF CROPPING: Appears to be good after first year's trial

SPECIAL FEATURES: Claimed to be 100% resistant to tomato blight.

WHEN TO SOW CRIMSON CRUSH SEED


The key dates for sowing and planting out Crimson Crush seeds are:

WHEN TO HARVEST CRIMSON CRUSH TOMATOES 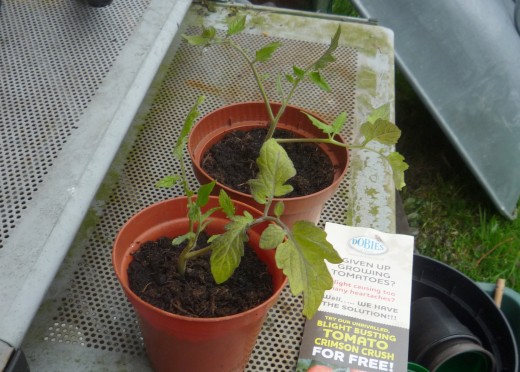 The same pricing applies for the 2016 season. Now that the new Suttons 2016 seed catalogue has been issued we can confirm that Crimson Crush tomato seed is now available. The price is £3.99 for ten seeds plus postage and packing. To buy Crimson Crush online, click to visit Suttons here.

If you need any more information on growing this variety, click here to go to our main tomato page.

Other varieties which may also be of interest include:

Sometimes our readers ask specific questions which are not covered in the main article above. Our
Outdoor Tomatoes comment / question and answer page
lists their comments, questions and answers. At the end of that page there is also a form for you to submit any new question or comment you have.

BACK TO VEGETABLE INDEX PAGE