When and How to Sow Sweetcorn

HOW TO CARE FOR
SWEET CORN

By David Marks
Although sweetcorn is a rather exotic vegetable from South America, recent breeding programs have resulted in varieties which are well suited to growing in our cooler areas.

Their primary care needs are lots of sun and a regular supply of water. Provide those and you have satisfied most of their needs. Feed them every couple of weeks, keep them weed free and you will be approaching top quality conditions for a top quality sweetcorn crop.


It's vital to water the plants when they are young and the root system is not developed. However, contrary to common advice, established sweetcorn will look after themselves with minimal watering when they are established.

The key to reducing the need for watering is to apply a thick layer of mulch. We personally use about 5cm / 2in of wood chip because we have a good supply of that material. Alternatives include a layer of newspapers / cardboard topped up with grass cuttings or any rotted organic matter.

See our trial of the variety Sparrow during the extreme drought year of 2018 which can be seen here. It's surprising how often given advice, even from the very best sources, can prove to be not the whole truth.

Weeding is also important because weeds compete (and often win!) for water and nutrients in the soil. If you use a hoe be very careful not to damage the roots which appear near the soil surface. 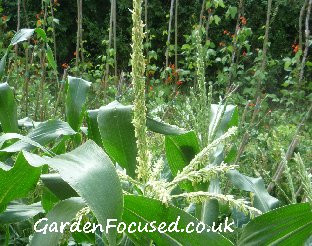 Mulching with grass clippings, garden compost or similar materials will help greatly with retaining moisture in the soil and will also prevent weeds to a large degree.

When the seedlings are young they may be attacked by pigeons and similar birds. If birds are a problem in your area then laying horticultural fleece over the seedlings for a couple of weeks should protect them. After that stage the fleece can be removed because birds won't attack larger seedlings. 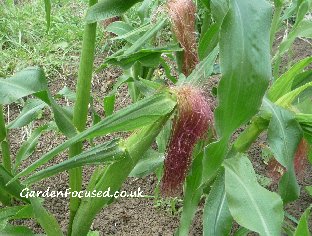 On our allotments this year we saw one gardener using a very effective and free method of bird protection. It consisted of smallish blocks of wood board place in the soil every three or four metres apart.

The blocks of wood board had a T piece nailed onto them to secure them in the soil. Nails were gently hammered into the edge of the boards (click the picture on the right to enlarge it and see more clearly). 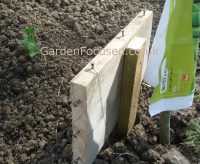 They then take a reel of cotton (any colour) and weave the cotton across the wooden boards using the nails as guide points. So far this year this method has provided 100% protection against birds for sweetcorn, peas and onion sets.

It's almost free bird prevention because the wood can be found almost anywhere with only a few nails and a reel of cotton needed to be bought. Let the plants grow through the cotton and only remove the wooden boards for storage at the end of the year. 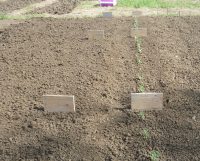 Sweetcorn does better if a good supply of nutrients are present in the soil. Ideally we would feed every fortnight with Growmore (nitrogen rich) fertiliser granules for the first two months and thereafter a tomato plant feed every couple of weeks up until harvesting.

Sweetcorn is a tall thin vegetable which is top heavy and can easily damaged by strong winds. To help prevent this we recommend drawing up the surrounding soil around the base of the stem so that the roots can grow into it and provide the plants with more support.

Often suckers will grow from near the base of the plant and it might appear that these are best removed. However, research to date indicates that this may well reduce the strength of the main plant so we suggest leaving the suckers alone to provide extra support.


Sweetcorn is unusual because the actual corns are surrounded with a green husk and not readily visible. Also, the actual kernels themselves quickly look like they are mature but in fact may well need a week or two more to achieve ripeness. The external colour of the kernels is not a guide to their ripeness.

In your area, the earliest that sweetcorn will be ready for harvest is the fourth week of July onwards but in many cases harvest time will be later. The timing is dependent on the weather through the growing season, when the sweetcorn were sown and the variety.

To test if sweetcorn is ready for harvest, gently separate the external green husk around halfway up the cob to expose a small number of the yellow kernels. Use your fingernail to pierce one of the kernels - if a watery liquid is present the sweetcorn is not ready yet, if the liquid looks milky then it's ready, if the liquid is thick and pasty the cob is over ripe.

To harvest a cob, twist and bend it away from the main stem at the same time. You now have one of natures sweetest and tastiest vegetables, so read on for guidance about how to store sweet corn after it has been harvested!

Keep them cool is the rule. Harvest sweetcorn either in the morning or late afternoon when the temperatures are lower. To maintain the maximum sweetness store your sweetcorn in the coolest part of your fridge as soon as possible. Normal sweetcorn is best eaten immediately, extra tender sweetcorn will store in the fridge for about four days and extra sweet for one or two days longer. Although all are undoubtedly at their very best when eaten immediately after harvest.

Sometimes our readers ask specific questions which are not covered in the main article above. Our new
Sweetcorn comment / question and answer page
lists those comments, questions and answers. At the end of that page there is also a form for you to submit any new question or comment you have.