PESTS AND DISEASES OF RUNNER BEANS

By David Marks
The key pests and diseases are aphids, slugs / snails, flowers which fail to produce beans and halo blight.

Problems often first occur when beans rot before they can grow - annoying but a quick re-sow normally solves the problem. Aphids can sometimes get out of control if not treated as soon as they are noticed. Our write up below lists a few "homemade" methods of combating aphids as well as the standard advice.


Runner Beans suffer aphids (small blackflies and greenflies) to the same degree as many other vegetables. You will know the plant has them because there will be lots of massed black / green tiny aphids on the leaves and stems - they tend to prefer the new growth and the undersides of leaves but will spread all over the plant if left to their own devices.

It's also likely that you will see ants crawling up and down the stems and stems, these are affectively farming the aphids and will only make the problem worse. The aphids secrete a sticky sweet substance and this attracts mould which you may also notice.

HOW TO GET RID OF APHIDS ON RUNNER BEANS


We have a page dedicated to treating blackfly and greenfly which can be found here. That page offers all the standard advice on getting rid of aphids but at the same time it has become apparent that there are a range of not-so-standard remedies which lots of gardeners use. A few of these are listed below, we leave it up to you to decide if they are worthy of trying or not.

THE GARLIC DRENCH
It's well known that simply spraying you plants with slightly soapy water will reduce the number of aphids. This method involves leaving three or four crushed garlic cloves to soak in the water before spraying it on. The theory is that insects don't like garlic so garlic in the water will repel them.

SUNFLOWERS
If ants are farming the aphids then a couple of sunflowers grown nearby may well interest the ants more than the runner beans. The ants will then herd the aphids to the sunflowers.

SEMOLINA AND FARMING ANTS
Many gardeners report that simply killing farming ants (ant powder will do the job) reduces the amount of aphids. One recommendation for killing ants is to  put a small piece of semolina near the ants. Apparently they take it back for the queen ant to eat but she cannot actually digest it and explodes!

OXALIC ACID
Rhubarb leaves contain a fair amount of oxalic acid (enough to cause severe discomfort if humans eat them) which can be used to kill aphids. Cut the leaves into bits and boil them then leave them to simmer for five minutes. Add a tablespoon of washing up to the liquid and spray over the aphids.

Slugs and snails love to eat young runner bean plants and can often cause irreversible damage over a single night. We have a special page devoted entirely to slugs and snails (click here) although runner beans respond to specific preventative measures which are particular to them.

Two characteristics of runner beans can be used to their advantage when preventing slugs and snails. First the plants grow very quickly so they are only at risk for three weeks or so, after that slugs and snails will tend to leave them alone. Secondly they will be growing above ground in early summer at first and although dry weather is not guaranteed it is likely.

With the above two factors in mind we recommend sprinkling fine multi-purpose compost around them so that it encircles each plant by about 15cm /6in. Slugs hate crawling on dry, fine multi-purpose compost, it clogs up their crawling mechanism. If it does rain enough to wet the compost significantly then apply the dry compost again. This method used in conjunction with others on our slug / snail page will dramatically increase your chances of success against the gardeners number one enemy!

Another very successful solution for small runner beans is to use large plastic bottles which previously contained soft drinks. Cut the bottoms off and place the top bit (without a cap on) over the young plants. It will act as a mini-greenhouse and provide lug and snail protection (see the picture below). If you use the plastic bottle as in the left of the picture remember to remove it in warm weather because it will trap lots of heat. 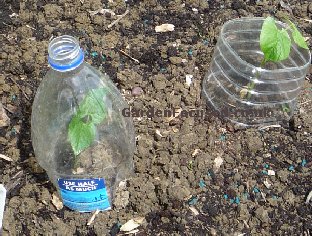 FLOWERS FALL OFF BUT THERE ARE NO RUNNER BEAN PODS


This is a "condition" rather than a pest or disease. The most common cause is that the pods have failed to set. Pods are set (pollinated) by bees principally and a lack of bees and other insects could cause this problem. Higher than normal night time temperatures can also be the reason. Another major cause of this condition is lack of water which causes the runner bean plant to effectively close down. Lots of watering or rainfall will solve the problem.

Picture is courtesy of Oregon.gov. The symptoms are first noticed when the very young leaves turn brown and some will fall off. The leaves which survive will have brown markings on them with a yellow "halo" type outer edge. Stems may also have brown spots on them.

The disease is first introduced on infected seeds ether because they have been infected before you bought them or, more likely, the infection develops in seeds past their sell by date. One "good" point about this disease is that it does not stay in the soil so infections which occurred in previous years will not be in the soil the next year. 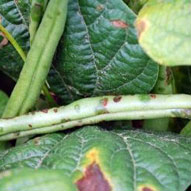 The best course of action for this disease is to remove affected plants and re-sow with new seeds from a different source. Because the disease affects very young plants you will almost certainly still have time to raise new plants. If you have sown infected seed and then water your plants the disease can be spread to nearby plants.


The symptoms are simple, you plant your runner bean seeds and they don't come up. If you burrow in the soil where the beans were sown and find them but they are soft and mushy then they have rotted in the soil. Almost always the cause of this is sowing the seeds too early which causes the cold weather to prevent them from germinating. Runner beans will only germinate in soil temperatures of at least 10°C / 50°F and if the soil is particularly damp the minimum will be higher. Aim for a soil temperature of 16°C / 50°F to avoid problems with runner bean seeds rotting.

The solution is to either sow them outdoors later in the year or start them off indoors and plant them out when the weather is warm. For your, or average, UK conditions (set your location by clicking here to be more accurate) the key dates for sowing and planting out runner beans are:

One word of advice if some of your runner beans are not germinating when sown in pots. Most beans will germinate within a week but sometimes they take two to three weeks. If no signs are seen above the soil after two weeks turn the pot up and tip out the soil gently in your hand. You may well see that the roots are growing in the soil even though the plant hasn't appeared above the soil surface. If you can see roots then the plant will soon grow.

This is normally not a pest or disease but a condition caused by harsh weather conditions. The most common cause is wind damage often, but not always, combined with dry ground. A prolonged cold spell after the runner beans have started to grow can also cause this problem. A picture of typical leaf damage caused by wind is shown below. 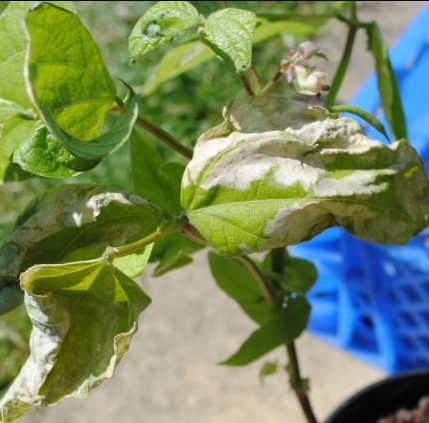 Sometimes the leaf discolouration is minimal but the leaves also appear limp. If wind damage is likely to occur most years, your only solution is to plant in a more protected position, a fence is one obvious option. When the damage has occurred it's best to let the plant recover of its own accord although a feed with a general purpose liquid fertiliser can only help.

Unless some of the leaves are completely damaged let them remain on the on the plant. Even small areas of green leaf is capable of absorbing sunlight and converting it into energy. The plant should recover of its own accord in two weeks time.

The Latin name for this bug is Palomena prasina and it is often found on runner beans and French beans as well as a range of other vegetables and ornamental plants. They do feed on the sap of runner beans but it is to such a small degree that you will notice no damage even though they do look a bit scary! 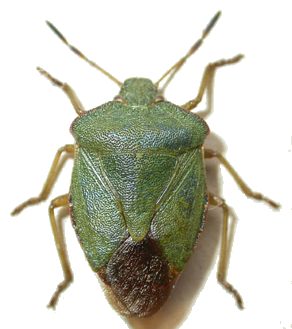 In its pre-adult stage the Green Shield Bug lacks the tail end brown mark but has three brown stripes over a third of its back.

In 2004 a new species of bug appeared in the London area and was given the name of Southern Green Shield Bug. As of 2016, it has remained exclusively in that area and does not appear to have spread. It is in fact a different species altogether called Nezara viridula. To date it has not reached sufficient numbers to do significant damage although it can cause mishapen leaves and a slight lack of vigour to the plant overall.

It looks very similar to the picture above but lacks the brown / black mark at the end of the body.

Sometimes our readers ask specific questions which are not covered in the main article above. Our
Runner Bean comment / question and answer page
lists their comments, questions and answers. At the end of that page there is also a form for you to submit any new question or comment you have.