By David Marks
Rhubarb is definitely one of the most robust vegetables and suffers from few pests and diseases but occasionally they do have problems.

Crown rot aside, which we explain below, the main problems are a variety of bugs mainly chomping away on the leaves and occasionally even the stalks. Slugs, snails and beetles are the main culprits. Before rushing to the chemical cabinet though, remember that you don't eat the leaves. So, unless the damage is very extensive, it may well be best to simply ignore the pests.

This is easily identified because as the name suggests, the crown of the rhubarb ((the central woody bit) rots! After a couple of weeks it will literally turn to mush and die away. The stalks and leaves are also killed.

The cause is a variety of fungi attacking the plant. In normal growing conditions this won't happen but when the soil becomes very wet and waterlogged this encourages the fungi to flourish. There is no cure, the entire plant should be dug up and burnt, don't put it on the compost heap. The fungi will remain in the soil for a few years so if you plan to plant replacement rhubarb, and don't want crown rot, then plant them in a different place in your garden.

A major factor which will increase the risk of crown rot is having the central part of the plant infested with weeds or anything which covers the crown. This will encourage excessive moisture retention and also slug damage which will allow fungi to enter the crown surface. Although rhubarb often grows well when ignored, it is best kept weed free.

It's very common for rhubarb leaves to be attacked by slugs and snails. They leave a patchwork of holes in the leaves but don't cause any other damage. We strongly suggest that you don't use any pellets or other chemicals unless the damage is very severe.

Most rhubarb plants will survive slug and snail damage easily and as the leaves get older in the season the slugs and snails will leave them alone - they prefer younger leaves near the ground. 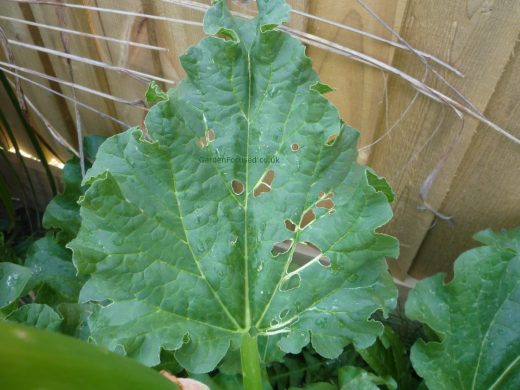 Although we don't recommend chemicals for slugs and snails on rhubarb, there are a couple of things you can do to reduce the problem.

First, keep the area around your rhubarb clear of weeds and other debris - both of those provide an ideal environment for slugs and snails.

Keep a look out for slugs and snails around the central base of the plant and dispose of them whenever you see them. This will go a long way to keeping your rhubarb free from leaf damage.

Occasionally rhubarb will show signs of below normal growth and this may also be accompanied by yellowing leaves. This is unlikely to be a pest or disease but much more likely to be something in its environment which is causing a problem.

If the soil is light or sandy your plant may not be getting enough nutrients. Rhubarb loves lots of plant food so that is definitely a solution worth considering. A couple of handfuls of blood, fish and bone fertiliser spread around each plant in February and August time will provide them with a good source of nutrients.

They also like lots of moisture in the summer, not waterlogged but moist soil. A full sun position can sometimes be a problem, especially in warmer parts of the UK. Rhubarb grows best in partial shade especially from June to August.

If you "force" your rhubarb, don't do this on the same plant two years running. Forcing rhubarb weakens the plant and if you do this two years in a row the plant will definitely suffer and show signs of weak growth.

Finally, don't harvest rhubarb stalks in the first year and only take a few in the next year. Harvesting too many stalks reduces the amount of leaves and these are the plant's major source of harvesting and making use of sunlight.

This normally occurs late in the rhubarb year (after all, they get an early start!) when the leaves are beginning to think about dying down, typically in July onwards. See the picture below sent in by one of our readers which illustrates this perfectly. 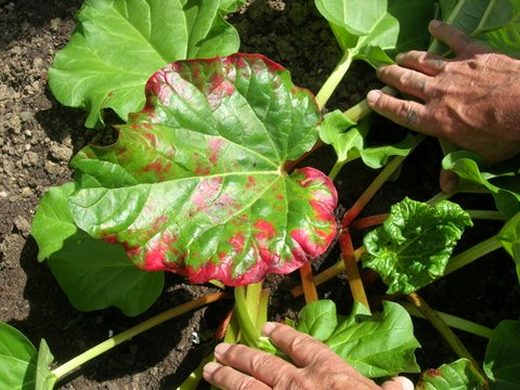 It looks quite dramatic on some leaves and may cause concern but it's all natural. Those red colours are present in the leaves most of the time but the chlorophyll (used to convert sunlight to energy) in the leaves hides the red and gives them their green colour. As the season progresses some leaves decide to start shutting down for winter and use the energy stored in the rhubarb crown as the key source of energy.

As they shut down they produce less chlorophyll and that exposes the red colouring in the leaves. It's most apparent in older leaves, as in the picture above, and it starts at the edges of the leaves and slowly moves inwards. Not all leaves are affected and different varieties of rhubarb are affected more than others.

Rhubarb grown in full sun is also more likely have red leaves because they have more residual glucose in them compared to rhubarb grown in part or full shade.

The spots are the fungus called rust which are most common on the leaves but they can also infect the stems of rhubarb. The fungus thrives in moist conditions where air-flow is restricted. It does not damage the crown although the crown can be weakened if the leaves are badly infected and cannot photosynthesise correctly.

To prevent and minimise the effects of rust on rhubarb do the following:

This is best illustrated by the picture below showing the cut end of a rhubarb stalk. There are hollow holes running up the centre of the stalk. 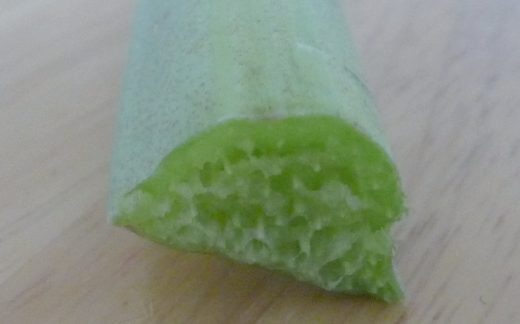 Rhubarb stalk with holes in the centre

This is typical of rhubarb stalks which have been picked when they are past their best. The stalk is beginning to deteriorate form the inside and is useless for eating. Rhubarb should be picked when it is young and tender. Leaving it too late to pick results in a very stringy texture and unpleasant taste.