Adjust all dates to your weather. Click here to do this, it takes less than a minute and your settings will still be there next time you visit us.

HOW TO CARE FOR RHUBARB

By David Marks
Rhubarb must be one of the strongest growing vegetables because if water logging is avoided it can survive in almost all positions and soils in the cool UK weather. See the picture below of a rhubarb plant which was in our garden when we moved in. Totally overrun with weeds it still stands out as a healthy looking plant with lots of juicy stems ready for picking.

However, even just a little care will pay dividends with a slightly earlier crop and even more healthy stems. Follow our minimal care plan for rhubarb and you could be displaying the stalks at your local garden show!


If you grow your rhubarb in semi-shade and mulch (see below) each spring there should be almost no need for watering your rhubarb. In very prolonged and dry weather, or if your rhubarb is planted in full sun, the occasional thorough drenching with water will be all that is required.

We regularly weed around our rhubarb (see below for an example of how not to grow rhubarb) and this is a good idea because once weeds start growing around the base of the plant they are very difficult to remove. 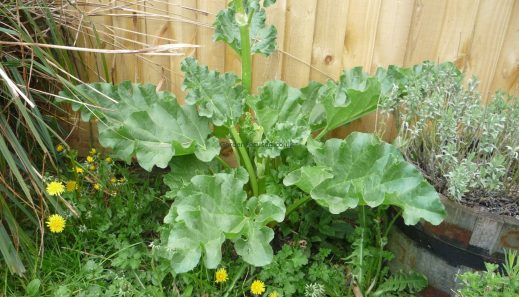 Feeding in Spring and Autumn with a long lasting organic fertiliser such as blood, fish and bone or bonemeal (two good handfuls sprinkled around each plant) will be sufficient. If you have any well rotted manure then spread a layer around the plant but far enough away so as not to touch any emerging stalks. 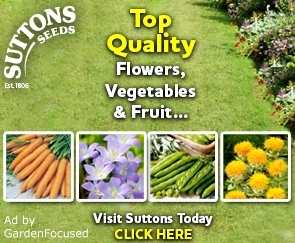 Frequently, rhubarb plants will produce flower heads (click the picture below to see one clearly) and these are best removed by simply cutting the stem below them. 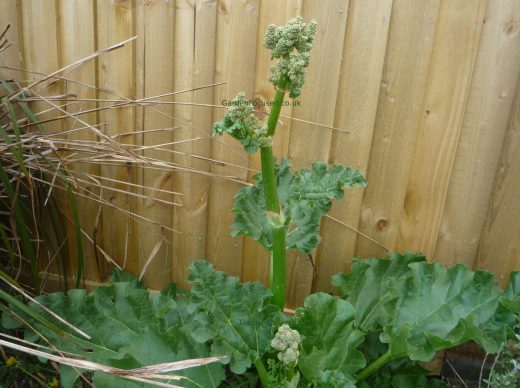 Mulching your plants in spring around the second week of May will conserve moisture in the soil and also help to prevent the growth of weeds. In winter when the plant has stopped growing, remove the remaining stalks and leaves and put them on the compost heap.


Forcing rhubarb is a troublesome procedure which gives you fresh rhubarb about three weeks earlier compared to normal  rhubarb. It requires you to go out in the freezing cold of February and tend to your rhubarb to force it to produce a crop far earlier than it would normally. Who on earth would do do that you may ask, why not wait three weeks longer for the normal crop? But gardeners are strange and competitive individuals who just love to get one up on their neighbouring gardeners.

If that's sold to you the benefits of forcing rhubarb then here's what you must do. When your plant begins to show signs of life (normally end of January to early February), cover it with something which traps in warmth and excludes light - a large bucket will do or maybe, if money is no object, a purpose made rhubarb forcing pot which will be available at most garden centres. Cover the container with straw, compost or anything which will keep the warmth within.

Keep a watch on the rhubarb every week or so and you will find that within three to four weeks of placing the cover on top you will have a crop of delicate and sweet stalks. This process weakens the plant so leave a forced rhubarb for two to three years before forcing it again.

HOW TO HARVEST RHUBARB


First, what not to do! Don't harvest rhubarb in the first year of its life and go easy during the second year. The reason is that the plant will be building up its strength and removing the stalks will also remove the leaves - these are its source of strength.

Next, don't eat the leaves because they contain oxalic acid which is poisonous.

Aside from that you are safe to do what you want with your rhubarb plant but leave at least six or so stalks remaining. To harvest individual stalks don't cut them off, this can introduce infection. The best way is to grip a stalk near the the base, twist slightly and pull outwards in one motion.

Harvest in your area normally begins in the the second week of March. Our advice would be to continue harvesting for three more months. This will then allow the plant to recover for more harvests next year. However, if the plant looks healthy and has lots of stalks then harvesting for four months is fine.

HOW TO OVER-WINTER RHUBARB

Rhubarb originates from the hugely cold area, Serbia in Russia. No winter weather in the UK is going to ever cause a significant problem to a rhubarb plant. Covering the crown to protect it from frost is pointless in most cases, it increases the risk of fungal infections by trapping in moisture.

For an established rhubarb plant in the ground, do nothing other than clear up fallen stems and leaves. They do not need any winter protection at all. In fact they grow best when the crown is left exposed to whatever our UK weather can throw at them.

For a rhubarb plant which has been planted in the current year, in winter I would cover the crown very lightly with bracken or shrub prunings. Don't cover with much, you don't want to trap in moisture and risk rotting the crown. If in doubt, do nothing.

If you have a rhubarb plant in a pot or container, it is very unlikely to be damaged by a UK winter. However, I would move it to a position protected from the worst winds, ideally next to a house wall. Again, if in doubt, do nothing, just clear away fallen stems and leaves as they die off.