HOW TO GROW
RADISH

By David Marks
Radishes are a very easy to grow crop requiring no attention after the seed has been sown. Their other great merits are that they grow to maturity in around four weeks (great for young gardeners) and because of this are rarely affected by pests or diseases.

There are radishes which can be grown from spring to mid summer and then the autumn / winter varieties which are planted in July / August for maturing in October / November.

Before reading this article further why not take two minutes to adjust all the dates in this website (including those below) to be more accurate for your home town (both UK and Ireland). The settings will last for six months. The dates will default to the UK average if no dates are set.

Succession sow spring / summer radish every two weeks up to mid-July and thin out seedlings as necessary.

Thin out seedlings- as soon as they appear

Begin to harvest spring / summer radish - the fourth week of May

Succession sow autumn / winter radish every two weeks up to early September and thin out seedlings as necessary.

WHERE TO GROW RADISH

Spring / Summer radish grow better where they are not exposed to harsh midday sunshine.  Early sowings are best in a full sunshine position but later sowings, from early June onwards, do best in slightly shady position to avoid the worst of the mid-summer sun. Shade can be provided by trees or other large objects or it can come from other larger crops grown nearby.

Autumn / winter (also known as mooli / daikon / Asian) radish are also relatively cool weather vegetables and when you first start to sow them they will appreciate some shade. Later sowings from mid-August onwards can be grown in full sun. By the time the seedlings emerge the weather will start to cool off. 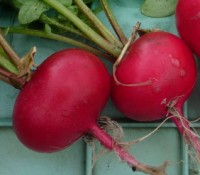 Most soils are suitable for both types of radish although a well drained, moisture retaining soil will give the best results. For autumn / winter radish it is especially important to remove stones from the and ensure the soil is well dug to a depth of 30cm / 1ft. Sprinkle a handful of bonemeal onto each square metre / yard of soil and gently work it in with a trowel.

WHEN AND HOW TO SOW RADISH SEED


SPRING / SUMMER RADISH
Make a line in the soil about 1.5cm / ½in deep and drop in one seed every 1.5cm / ½in. Draw the soil gently back over the seeds to cover them, water if the soil is dry. If you are growing more than one row of summer radish then the rows should be 15cm / 6in apart. Start sowing the seed in the third week of April and continue to sow small amounts of seed every two weeks until mid-July. 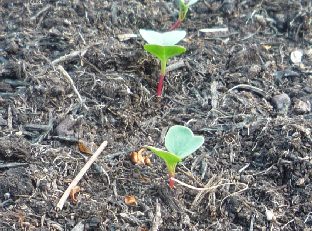 AUTUMN / WINTER RADISH
Make a line in the soil about 2cm / ¾in deep and sow one seed every 5cm / 2in. Draw the soil back over the seeds as for spring / summer radish and water well. Rows should be spaced 40cm / 16in apart. Star sowing autumn / winter radish seed in the third week of Juneand continue to sow small amounts of seed every two weeks until mid September.

All radishes should be watered if the soil becomes dry, good levels of moisture will ensure radish which is crisp, crunchy and tasty. When the seedlings appear, thin them out to one seedling every 3cm / 1in apart for spring / summer radishes and one seedling every 15cm / 6in for autumn / winter radishes. Other than weeding regularly radish should grow happily with very little attention.

WHEN TO HARVEST YOUR RADISH

Spring / summer radishes can be grown in containers of virtually any size. Simply fill with multi-purpose compost and treat the radishes as if they were in open ground. They will require more watering when the weather is dry.

A small, flattish rash which is coloured pink and white. It is a top variety for growing in containers because its roots are unusually shallow. Delicious taste and lots of peppery crunch. Awarded the AGM by the RHS.

Longer than the traditional radish shape this variety has a mild pepper flavour and loads of crunch. It has been around in one form or other for over a century and holds an RHS AGM award.

If you fancy having a try at growing autumn / winter radish then this variety is probably the first one to try. It is mature at about 20cm / 8in long and the flesh and outside skin is pure white. Great crunchy and mild flavour.

PESTS AND DISEASES OF RADISH

Radish suffer from very few pests and are one of the most dependable of vegetables. Slugs may be a problem but they are not really specific to radishes. The most common pest is the Flea Beetle which is discussed below.

Flea Beetles attack several vegetables but they have a particular liking for radish leaves. The picture below shows clearly what a bad attack of flea beetles looks like on radish leaves. They have lots of holes in the, most not even reaching the other side. The effect is to give the radish leaves a mottled effect. 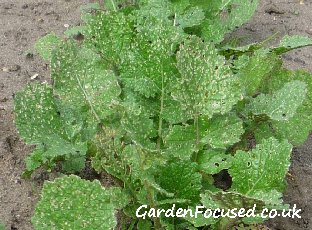 Click the picture to enlarge it and you will see that in this case the whole row is badly effected. The beetles themselves are black, 3mm long, visible to the naked eye and with strong rear legs that allow them to spring on and off leaves.

Flea beetles cause unsightly damage to leaves but in the case of radishes it doesn't significantly affect the vigour of the plant. Even in the relatively bad case above the radish will grow normally even if slightly slower. The beetles prefer dry soil and a dry atmosphere which is why lighter soils suffer worst, you will rarely see a bad case of flea beetle damage on clay soil because it retains moisture.

There are chemical sprays to kill this pest but in the case of radishes there is little purpose unless you plan to display vegetables with the leaves on. The best advice for the average gardener is to keep the soil watered well if you really are bothered by this pest.