By David Marks
An excellent choice of potato not only because it it extremely versatile but primarily because of taste. Wilja tastes of real potato and takes on some of the characteristics of the soil in which it is grown. As you might guess, the supermarkets  didn't like the idea of a potato tasting like a potato so they dumped Wilja several years ago in favour of the blander Estima.

For amateur gardeners interested in a second early that is full of flavour and suffers from no major drawbacks then we recommend Wilja very highly.

APPEARANCE, TASTE AND CHARACTERISTICS OF WILJA 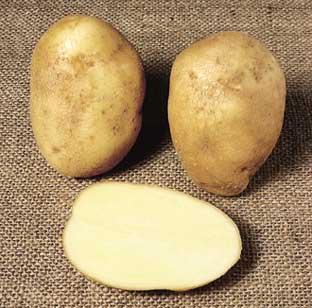 The yield from Wilja is good, not astonishing but very acceptable. What is unusual about this variety is that the majority of potatoes produced reach full size with only very small differences between them. The flesh is of a medium dry texture making this an excellent all round potato for roast, boiling, jackets and chips. One of Wilja's enduring advantages over some potatoes is that it holds its shape well even when boiled for a couple of minutes longer than necessary.

POSITIVE POINTS FOR WILJA
An excellent all-rounder as far as cooking is concerned and makes the best boiled potatoes. It's tops for taste. For a second early it keeps well. Excellent resistance to scab and dry rot, no real failings as far as disease resistance is concerned except for eelworm (potato cyst nematode). Good resistance to slugs.

NEGATIVE POINTS FOR WILJA
There are no major drawbacks to Wilja except for a susceptibility to eelworm. It was dropped from the supermarkets in favour of Estima because of its slightly rough skin. The last time you ate the skin of a second early potato was .........?


Wilja is a common variety of potato which is readily available online and sometimes in garden centres. Seed potatoes of this variety are available online, in many garden centres and also some of the diy stores. They are also sold by some of the discount supermarkets at low prices - most years they appear in Lidl, Aldi, Wilkinsons and even Poundland from the middle of February.


The key qualities of this variety are flavour and being great for cooking. The variety Charlotte is probably even better for cooking so needs to be considered as a worthy alternative and our own personal favourite would be Kestrel.

WHEN TO CHIT / SPROUT WILJA POTATOES

WHEN TO PLANT WILJA POTATOES


Wilja potatoes are second earlies potatoes and they are ready for harvest, if conditions are correct, 15 to 17 weeks after the seed potatoes are planted. The key factor governing the time for planting all potatoes is the date of the last frost in your area. Even a touch of frost can damage potato plants if their foliage is above ground, an unexpected severe frost can kill them completely.

WHEN TO HARVEST WILJA POTATOES


The harvest date for all potatoes is not only dependent on when you plant your seed potatoes, it also depends on the weather conditions throughout the growing season. But on average you can expect your Wilja potatoes to be ready for harvest some time between the second and last weeks of July 2017 in your area of the UK. This variety is a second early and they store better than most similar potatoes, a couple of months in the correct conditions. Click here if you want to know more about harvesting and storing potatoes.


Wilja seed potatoes are available online, in many garden centres and also some of the diy stores. They are also sold by some of the discount supermarkets at low prices - most years they appear in Lidl, Aldi, Wilkinsons and even Poundland from the middle of February. If you want to keep up to date with when they are available at the discount stores then join our Facebook page where we post details as soon as they become available.

Suttons Seeds (a GardenFocused approved supplier) sell Wilja seed potatoes which are not only correctly certified but they are graded by size to avoid unduly small seed potatoes being sold. Click here for more information and to buy Wilja online. A 1kg bag will contain about 11 good sized seed potatoes.

USE: Excellent for all types of cooking except as salad potatoes.