By David Marks
Vitabella is a new early potato variety which we tested in 2018. One of its main claims to fame is that it is very resistant to late blight.

But that's only useful if they taste good, produce a reasonable crop and are easy to grow. The results from our test were almost completely positive.

They are oval potatoes with a skin that falls off very easily. Almost no eyes, so they look particularly good. The flavour and texture is top quality, buttery but at the same time firm.


Not known at present.

APPEARANCE, TASTE AND CHARACTERISTICS OF VITABELLA 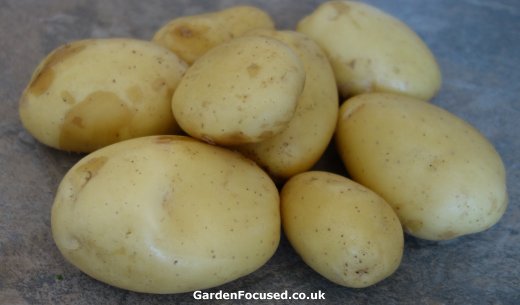 If you look at the picture above of some of the Vitabella potatoes we grew you will notice in the back left potato a couple of darker areas on the potato, that's the skin. In fact, when you dig the potatoes up, most of the surface is that slightly darker colour.

But by simply handling the potatoes, the skin falls off, it really is very easy to remove. The potatoes are a very light yellow with only a few eyes and are one of the best looking we have seen. They are oval in shape.

At this point in time we have only used them as boiled potatoes and the flavour is delicious. The first point to note is that if you lightly boil them for 20 minutes, they retain their firm texture 100%.

UPDATE: We have just tried frying them as chips. They are not as good as the best of the maincrop potatoes such as Maris Piper but for an early / second early potato they produce decent chips. Make sure you don't overcook them, they are ready as soon as they colour to a light brown. See the picture below. 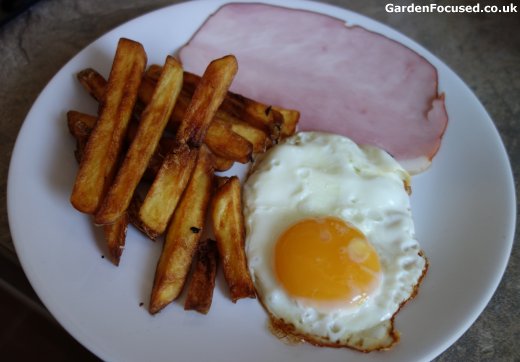 Many varieties when grown in the home garden can so easily disintegrate during cooking, this is absolutely not the case with Vitabella. So forget all the steaming etc. to avoid disintegration, simply boil as you would a shop bought potato.

The taste is definitely buttery and the texture nicely firm. An ideal combination. We rate the taste and texture as equal to best new potatoes we have ever eaten.

In our test we grew the potatoes in two large potato bags with three seed potatoes per bag. They took off like a rocket with mid green healthy looking foliage. They were supplied with lots of water and initially a nitrogen rich liquid fertiliser. Then, after a couple of months we switched to a liquid tomato feed.

We started to harvest the potatoes in early July. It's now late October and we are still harvesting Vitabella potatoes and it looks like they will last into November. An astonishing results which out performs any other variety we have ever tasted This variety can be treated as a dual new and old potato variety, we are very impressed.

Even in October the potatoes are virtually unmarked by scab, still cook extremely well and are very tasty. In our experience Vitabella provides the widest harvest period of any potato we have ever grown.

One slight concern we had was Vitabella grows taller than average which might make them unsuitable for areas subject to high wind. Having said that, ours did topple over in some high winds late in the season but they still continued to grow healthily without check.

We suffered no disease problems at all, the foliage and potatoes remained healthy throughout the entire growing season. Late blight resistance is rated as very high and resistance to other common potato problems is also high.

Only scab might be a problem with their rating being judged as average. Our experience of the scab question though is that they remain virtually unaffected when grown in containers and raised beds.

POSITIVE POINTS FOR VITABELLA
Taste is excellent and they boil without falling apart. They look the part as well, you would be proud to serve these potatoes to your mother-in-law! Disease resistance is excellent, especially for the gardeners nightmare, late blight. If left in the ground for longer than normal, they last particularly well.

NEGATIVE POINTS FOR VITABELLA
The only negative is the reported average resistance to scab although we suffered none in our test.


Vitabella is a very new variety and is not available at the moment from your local garden centre. Neither is it commonly available online. We bought ours from Patch Seed Potatoes and they arrived on time and in perfect condition. Thoroughly recommended.


The key qualities of this variety are flavour, excellent appearance and good disease resistance. You may also want to consider Nicola potatoes which have very similar attributes. Other good second early varieties are Kestrel and Wilja.

WHEN TO CHIT / SPROUT VITABELLA POTATOES


We recommend that you start chitting / sprouting Vitabella potatoes in the third week of February. This will give them four to five weeks to develop healthy sprouts just at the time when they are ready to be planted out. Keep the potatoes in cool but light conditions to ensure they grow short, green sprouts. Click here for our page dedicated to chitting / sprouting potatoes.

WHEN TO PLANT VITABELLA POTATOES


Vitabella potatoes are first / second earlies potatoes and they are ready for harvest, if conditions are correct, 14 to 16 weeks after the seed potatoes are planted. The key factor governing the time for planting all potatoes is the date of the last frost in your area. Even a touch of frost can damage potato plants if their foliage is above ground, an unexpected severe frost can kill them completely.

WHEN TO HARVEST VITABELLA POTATOES


The harvest date for all potatoes is not only dependent on when you plant your seed potatoes, it also depends on the weather conditions throughout the growing season. But on average you can expect your potatoes to be ready for harvest some time between the last week of June and second week of July in your area of the UK.

USE: Boiling, chips and general salad use; later in the season as maincrop

STORAGE: Three weeks in an indoor kitchen, much, much longer if left outdoors in containers / raised beds.

SPECIAL FEATURES: Excellent blight resistance, the longest cropping season of all potatoes we have tested. Boil without breaking up.