By David Marks
Red Duke of York is a sport of the variety Duke of York and not only does it look better but also cooks better. Overall, this is one sport which is better than the original.

This variety was introduced to the UK in 1942 and was grown extensively by amateur gardeners towards the end of World War II and after during the very austere post war period. The red skin, which retains its colour during cooking, make it look very attractive.


The parents of Duke of York are not known, the Red Duke of York is a sport which was discovered by chance in Holland.

APPEARANCE, TASTE AND CHARACTERISTICS OF RED DUKE OF YORK 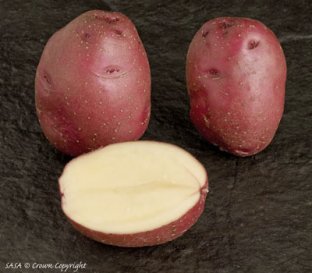 This is one of the few red-skinned new potatoes. Initially the skin is red with very small white marks on it, but later on the skin hardens and crazes over. This doesn't affect the flavour at all. The potatoes are regularly oval shaped and if left in the ground to fully mature they can get quite large. The eyes are shallow and this makes for easy peeling. The flesh is white with a slight yellow tinge to it. Sometimes, but not always, they produce flowers which are white and light violet, berries are not produced under normal circumstances. Taste is excellent.

Disease resistance is low but flavour and looks make this a variety still worth growing. We grow ours in potato bags which significantly reduces the risk of pests and diseases. From our experience and others we have talked to it appears that the red skin pigment on this variety protects it to some degree when exposed to light which means that even potatoes grown near the surface rarely turn green.

NEGATIVE POINTS FOR RED DUKE OF YORK
Resistance to disease is low.

BUYING RED DUKE OF YORK SEED POTATOES IN THE UK


Red Duke of York is a common variety of potato and is freely available online, from garden centres and diy stores.


The key qualities of this variety are flavour and good yields, it also has a an attractive red skin but that is almost unique for an early variety. On that basis the Swift potato must be a good alternative and Pentland Javelin may well be of interest.

WHEN TO CHIT / SPROUT RED DUKE OF YORK POTATOES

WHEN TO PLANT RED DUKE OF YORK


Red Duke of York potatoes are a first early variety and they are ready for harvest, if conditions are correct, 14 weeks after the seed potatoes are planted. The key factor governing the time for planting all potatoes is the date of the last frost in your area. Even a touch of frost can damage potato plants if their foliage is above ground, an unexpected severe frost can kill them completely.

The date for planting Red Duke of York potato seed can be calculated on the basis that seed potatoes will take four weeks before they appear above ground. Given also that you want them to appear above ground only when the danger of frost has passed (the last week of April is the UK average) the last week of March is about right time to plant them.

WHEN TO HARVEST RED DUKE OF YORK POTATOES


The harvest date for all potatoes is not only dependent on when you plant your seed potatoes, it also depends on the weather conditions throughout the growing season. But on average you can expect your potatoes to be ready for harvest some time between the second and last weeks of July 2017 in your area of the UK.

PEST AND DISEASE RESISTANCE OF

USE: Excellent all rounder for boiling, baking, roast, chips and sautéing. They hold together well when boiled

STORAGE: A couple of weeks

AWARDS: RHS Award of Garden Merit in 1998 and reconfirmed each trial after that