By David Marks
Pink Fir Apple is an old French variety which can be traced back to at least 1850. It was never very popular until about 2000 when it underwent something of an unexpected increase in popularity.

They are not without their disadvantages but these are more than outweighed by top quality taste and texture, good storage abilities for a salad type potato and the sheer novelty value of their shape. Not often found in the shops (except at a premium price), this is a maincrop potato which is certainly worthy of a place in your garden.


The parents of Pink Fir Apple are unknown. 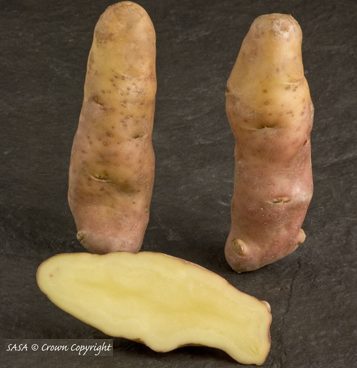 These potatoes have a long, knobbly shape which often produces lots of laughs at harvest time. Their shape really is unpredictable. The skin colour is a mix of light brown and pink, generally smooth. Because of their shape, peeling these potatoes is out of the question so be prepared to eat them with the skins on.

We normally scrub them with a brush prior to cooking. The skin is not thin but is quite edible. The flesh is pale yellow and waxy even though this is a late maincrop. When harvested, expose them to the sun for a couple of days and the will store for two or three months.

These are very strong growing potatoes and in windy conditions the tall foliage is easily blown over. This doesn't seem to affect crops, it just looks a bit unsightly. This variety prefers cool areas of the UK which are not subject to large amounts of rain. They do not do well in the South of England as a general rule.


Pink Fir Apple is a common variety of potato and is widely available online, from garden centres and diy stores. A couple of our recommended suppliers include Suttons and Crocus.

Buying seed potatoes from the discount store can be a good deal but it can also result in a sub-standard crop. The discount stores take the second quality seed potatoes whereas the more conventional suppliers take the best quality. Unfortunately you will only find this out after you have carefully tended your crop for several months.


Suggesting even one alternative to Pink Fir Apple is difficult because they have an unusual combination of qualities. Possibly the nearest variety is Anya which is a second early.

For other potato varieties which we have fully reviewed, click the drop down box below, select a variety and then click the More Information button.


Pink Fir Apple potatoes are a late maincrop variety and they are ready for harvest, if conditions are correct, 22 weeks after the seed potatoes are planted. The key factor governing the time for planting all potatoes is the date of the last frost in your area. Even a touch of frost can damage potato plants if their foliage is above ground, an unexpected severe frost can kill them completely.

The date for planting Pink Fir Apple seed potatoes can be calculated on the basis that seed potatoes will take four weeks before they appear above ground. Given also that you want them to appear above ground only when the danger of frost has passed (the last week of April is the UK average) the last week of March is about right time to plant them.


The harvest date for all potatoes is not only dependent on when you plant your seed potatoes, it also depends on the weather conditions throughout the growing season. But on average you can expect your potatoes to be ready for harvest some time between the second and last week of August in your area of the UK.

SKIN COLOUR / TEXTURE: Very light brown to pink, thin, smooth with shallow eyes. Peeling the skin is not a feasible option because of the variable shape.

STORAGE: Up to three months

REGULARITY OF CROPPING: Regularly crop but can be low in volume

SPECIAL FEATURES: One of a very few salad type potatoes which is produced as a maincrop and stores well.