By David Marks
Orla is a good all round, modern variety with a couple of qualities which make it stand out from the crowd. The first is that it produces a good crop of first early potatoes which can be left in the ground to be harvested as second earlies and even as early maincrops. This extends its harvesting period well beyond most other varieties.

The second quality it exhibits is very good resistance to tuber blight. The foliage may be affected but if this is trimmed off when blight takes hold the tubers will, in most cases, be unaffected.

APPEARANCE, TASTE AND CHARACTERISTICS OF ORLA 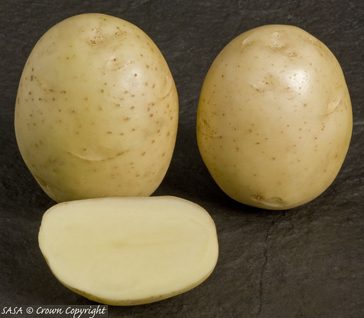 NEGATIVE POINTS FOR ORLA
Susceptible to slug damage and


Orla potatoes are becoming more popular but only a few garden centres stock them. Neither are they widely available from specialist online suppliers.

Buying seed potatoes from the discount store can be a good deal but it can also result in a sub-standard crop. The discount stores take the second quality seed potatoes whereas the more conventional suppliers take the best quality. Unfortunately you will only find this out after you have carefully tended your crop for several months.

Crocus (a GardenFocused approved supplier) sell Orla seed potatoes (and many other varieties) which are not only correctly certified but they are graded by size to avoid unduly small seed potatoes being sold. Click here for more information and to buy Orla online. A 2kg bag will contain about 22 good sized seed potatoes.


The key attributes of this variety are blight resistant tubers and the ability to remain in the ground for a long time, increasing in size. Blight resistance in potatoes is becoming more common but Orla can be grown as a first early, is also blight resistant and that makes it hard to beat.

If blight resistance is key to your requirements then you'll need to go for Setanta or one of the Sarpo varieties which are maincrops. If you main requirement is a first early which can also be left in the ground longer than most, then we suggest Pentland Javelin` or Lady Christl.

For other potato varieties which we have fully reviewed, click the drop down box below, select a variety and then click the More Information button.

WHEN TO CHIT / SPROUT ORLA POTATOES

WHEN TO PLANT ORLA POTATOES


Orla potatoes are generally considered to be a first early variety but leave them in the ground a few weeks longer and they can also be grown as second earlies or early maincrop. The key factor governing the time for planting all potatoes is the date of the last frost in your area. Even a touch of frost can damage potato plants if their foliage is above ground, an unexpected severe frost can kill them completely.

WHEN TO HARVEST ORLA POTATOES


The harvest date for all potatoes is not only dependent on when you plant your seed potatoes, it also depends on the weather conditions throughout the growing season. But on average you can expect your potatoes to be ready for harvest some time between the second and last week of August in your area of the UK.

They can also be harvested up to four weeks later as second earlies or maincrops.

TYPE: First early but can be harvested as second early or early maincrop

TASTE AND TEXTURE: Lots of taste, waxy texture turning more floury the longer it is left in the ground

STORAGE: Up to two months, good for a first early

SPECIAL FEATURES: A first early which can be left in the ground to bulk up as a maincrop.