By David Marks
Arran pilot is one of the most popular first early potato varieties amongst amateur gardeners and this has been the situation for 30 years or so.

There is no doubt that this variety has a very short shelf life, ten days at the most. But when eaten within a couple of days after they are dug up the flavour is supreme, quite delicious. That is the best way to cultivate this variety so only grow as many as you can eat almost immediately they are harvested. Lots is published about the taste of Jersey Royals but Arran Pilot can on many soils equals or surpasses that flavour.


The parents of Arran Pilot are May Queen x Pepo 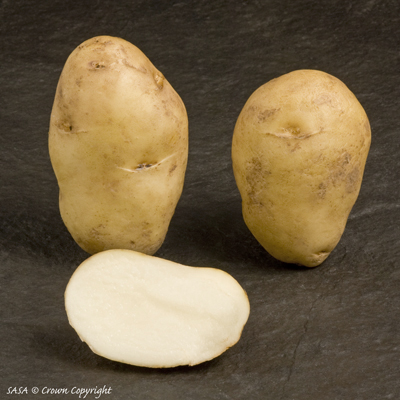 Not the best looking of potatoes, Arran Pilot has never been a commercial success. But amongst amateur gardeners looking for a tasty first early variety it has been a top choice for many, many years. Taste is delicious when harvested and served immediately.

NEGATIVE POINTS FOR ARRAN PILOT
Generally poor disease resistance but grows quickly so often this is not a problem.


Arran Pilot is a common variety of potato which is readily available online and sometimes in garden centres.


Crocus (a GardenFocused approved supplier) sell Arran Pilot seed potatoes (and many other varieties) which are not only correctly certified but they are graded by size to avoid unduly small seed potatoes being sold. Click here for more information and to buy Arran Pilot online. A 2kg bag will contain about 22 good sized seed potatoes.


The key qualities of this variety are flavour and early maturity. On that basis the Swift potato must be a good alternative as is International Kidney. Neither quite equal the taste but they come near to it and both have a longer "shelf" life.

WHEN TO PLANT ARRAN PILOT POTATOES


Arran Pilot potatoes are first early potatoes and they are ready for harvest, if conditions are correct, 14 weeks after the seed potatoes are planted. The key factor governing the time for planting all potatoes is the date of the last frost in your area. Even a touch of frost can damage potato plants if their foliage is above ground, an unexpected severe frost can kill them completely.

WHEN TO HARVEST ARRAN PILOT POTATOES


The harvest date for all potatoes is not only dependent on when you plant your seed potatoes, it also depends on the weather conditions throughout the growing season. But on average you can expect your potatoes to be ready for harvest some time between the second and last weeks of July 2017 in your area of the UK.

STORAGE: Ten days but best if eaten fresh from the ground