By David Marks
There are many varieties of onions available to be grown from seed and sets in the UK. Which variety is best for you depends on a number of factors, some of which are listed below.
If you answer those questions then your choice of onion varieties will decrease remarkably. This guide to the more common onion varieties available in the UK for growing outdoors helps you to do just that. The varieties listed below are in alphabetic order.

APPEARANCE: Best known for its capabilities to grow huge onions for the show bench. The skin is  golden and the inside is white. The bulbs are oval.

TASTE: Mild flavour, good for salads as well as cooking

AVAILABILITY: We have only found them sold as seeds, widely available in garden centres and online.

NOTES: Ailsa Craig has been used by gardeners for over 120 years and not only for show purposes. They are a long day variety so not best when grown in the south of England. Good disease resistance.

NOTES: Cultivated for over 120 years in the UK. Ideal for autumn planting.

KEEPING QUALITIES: Good keeping qualities and will last until February on average.

TASTE: Mild flavour which is suitable for salads and cooking.

AVAILABILITY: Widely available online but as seeds only. Suttons sell them in a 550 seed pack.

NOTES: Bedfordshire Champion dates back over a hundred years as far as gardening use is concerned and in our opinion it it the epitome of how an onion should look and taste. Good disease resistance and an excellent choice for the beginner. Not for autumn planting.

APPEARANCE: Another F1 variety developed from Sturon. The bulbs are slightly flatter but otherwise the same.

KEEPING QUALITIES: Good keeping qualities and will last until January on average.

AVAILABILITY: Available online from three or four suppliers but only as sets. Suttons are selling them as a 250g pack (approximately 60 sets).

We mention this type of onion here not because we particularly recommend them but they are fun to grow. The small onions form above ground at the top of a long stem in summer. When ripe the stem gradually falls over and where it touches the ground, typically 30cm / 1 foot from the parent, they will root and grow a new plant the next year.

Egyptian Walking Onions sets (very small) are typically bought and planted in either spring or early autumn but can be sown any time in between as well. The onions are small, strong tasting and an acquired taste. Getting hold of them to buy can be difficult. Try an E-bay supplier you trust if you cant find them elsewhere.

KEEPING QUALITIES: A month or so.

AVAILABILITY: Appear only to be available from Thomson Morgan as sets.

NOTES: This is an onion for overwintering. Plant in October for a June crop.

APPEARANCE: Straw coloured skin which is much lighter than many onions, the skin is pure white. The onions are larger than average in normal gardening conditions. Not quite a globe shape.

AVAILABILITY: Developed by Suttons this is available from a few other suppliers as seeds

APPEARANCE: Light brown coloured skin, white bulb inside.  Not quite a globe shape.

AVAILABILITY: One of the most widely available varieties online and in garden centres. Sold as sets and seeds.

NOTES: The "F1" label means it is more expensive compared to most but without any significant advantages.

APPEARANCE: Red skinned, white and red inside the bulbs are not far off circular.

AVAILABILITY: Available as seeds online only.

HARVEST SEEDS?: No this is an F1 variety.

NOTES: Unremarkable, Red Baron is better in all respects.

KEEPING QUALITIES: This is an overwintering variety and stores well for the type. July harvests will store until September

NOTES: A Japanese onion type which has one of the longest storage times. Plant sets in September for an early July crop. This is one of the most popular over-wintering onions and deservedly so, resists bolting well.

AVAILABILITY: Only available online as onion sets from Suttons and Dobies. Suttons work out cheapest at £3.49 for a 250g pack (approximately 60 sets). 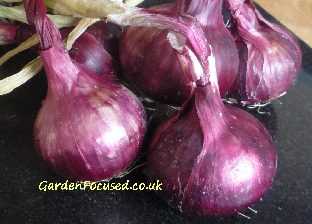 AVAILABILITY: Widely available as seeds and sets. Only buy heat-treated sets of this variety if you want to avoid any chance of bolting in the very south of the UK.

NOTES: RHS AGM. Matures mid to late season. A long-day variety which does best from north of London and Bristol in the UK. The onion sets can bolt when grown in the south of England. 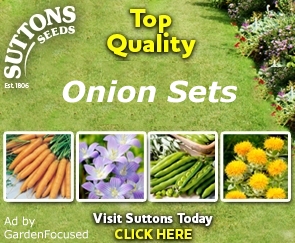 
APPEARANCE: A pleasantly shaped flat onion with a red skin and red / white inside.

TASTE: A mild to medium taste and this is where it shows it versatility. It is a good cooking onion but at the same time its mild taste and excellent colour make it ideal for salads, far better than Red Baron for that purpose.

AVAILABILITY: Moderate availability as seed, unable to find any as sets.

NOTES: Not a good variety to over-winter.

AVAILABILITY: Available online from three or four suppliers but only as sets. Suttons are selling them as a 200g pack (approximately 45 sets) for £3.99.

NOTES: Intended as an improved version of Red Baron. In our trials it performed no better or worse than Red Baron.

APPEARANCE: Golden skins, white inside. The medium-sized bulbs are nearly round.

AVAILABILITY: Widely available as sets, seeds and young plants both online and in garden centres.

HARVEST SEEDS?: No, this is an F1 variety

NOTES: Downy Mildew resistant. Suttons sell them as "Santero Improved" which is exactly the same variety as Santero. Matures a couple of weeks earlier than most

KEEPING QUALITIES: Low, keeps for a month at most.

AVAILABILITY: Widely available as both sets and seeds. This is a Japanese overwintering variety (not a maincrop variety) so sets are available from September, seeds need to be sown in August for a good crop.

NOTES: Probably the most widely planted over-wintering onion, it has been used with success for many decades. Introduced from Japan in the early 1970s.

AVAILABILITY: Available online as seeds from Suttons in a 350 seed pack.


APPEARANCE: An improved version of Sturon (see below). Golden brown outer skin colour, white inside. Said to have a more regular round shape.

AVAILABILITY: Widely available as sets. We couldn't find any seeds but this may change if the variety gains in popularity. More expensive compared to Sturon because it is F1.

NOTES: RHS AGM in 2002, a good variety if you like traditional onions.

KEEPING QUALITIES: Does not store well at all

AVAILABILITY: Available as sets only.

NOTES: A low yield of badly formed onions, not recommended at all. Don't be tempted by the glossy pictures, your onions will not turn out like that!

NOTES: An old favourite variety in the UK which reliably produces a good crop. Has withstood the test of time. Sometimes referred to as Stuttgarter Giant. Rarely bolts and tolerates cool conditions well. 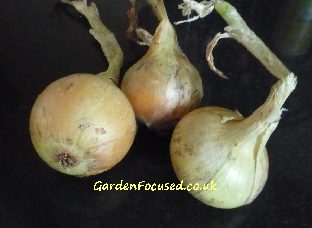 APPEARANCE: Golden brown outer skin colour, white inside. The bulbs are nearly round and with care can grow larger than average.

NOTES: RHS AGM, withstands the cold well so is a good variety for sowing direct in the ground. Matures mid-season. One of the oldest onion varieties, a good all-rounder which has withstood the test of time well.

KEEPING QUALITIES: Poor, stores for a couple of weeks but see notes below for why this still a very worthwhile variety to grow.

TASTE: Sweet and very mild. Can be eaten raw, excellent in salads.

NOTES: This maincrop variety is different from the rest, its sweet taste is a treat. Imported from Corsica. You won't want to grow many because they don't keep well but grow a few and you'll be very pleasantly surprised.


APPEARANCE: Straw brown outer skin colour, white inside. The bulbs are an almost round shape.

AVAILABILITY: Only available as seed and only available from Real Seeds - ignore their claim that "it is one of the most-grown onions in the UK" because it certainly is not!

NOTES: A rather unremarkable maincrop onion.