By David Marks
The key division of broad bean varieties is between those which stand a good chance of success if planted in autumn and those which are best left until early spring.

A very prolific variety which is more dwarf than most other types. 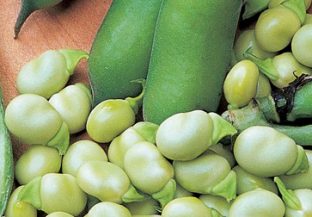 They benefit from some support but in protected sites they are quite capable of supporting themselves. Excellent flavour and they freeze as well as all the other varieties.

Stereo broad beans are smaller than average, around 12cm / 5in long and have thinner pods than most. If you pick them when they are young they can be cooked and eaten whole without removing the pod. Let them mature to full size and you will find that there are four to five beans per pod.

The plants will grow quite tall and definitely need support. The flowers are a pure white.

Our favourite because of its ease to grow and the crop produced. It has been awarded an RHS AGM which was recently confirmed. This is a dwarf variety which produces a heavy crop. 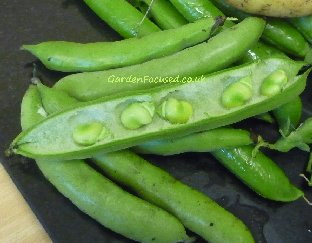 The plants support themselves in all but the windiest conditions. Suitable for sowing in both autumn and spring. 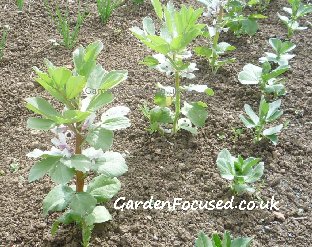 They produce white flowers which are attractive. Disease and pest resistance is good, even blackfly affect them less than most other varieties.

This variety is one of the best for autumn sowing giving an early spring crop. The plant grows to 90cm / 3ft tall and may need staking but only in windy conditions. The beans are tender and last well on the plant without going tough.

An old variety which is now making a come-back for many good reasons. First, the flowers are a deep crimson colour when they emerge in May and June, a good talking point with fellow gardeners and allotmenteers! They really do look good, a superb change from the normally white flowers of broad beans. As a bonus the scent is delicious but not over-powering. 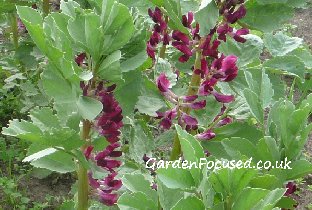 Crimson Flowered grows to about a metre (3 foot) tall and, in our garden, requires no support. The beans themselves are slightly smaller compared to more modern varieties but the yield is high overall. The beans are tastier and sweeter compared to varieties with larger beans and the texture is on the firm side.

The final bonus is pest and disease resistance, Crimson Flowered seems to be unaffected by blackfly at least until the near the end of the season. Other pests and diseases seem to give it wide berth making one of the easiest varieties to grow that we know of. 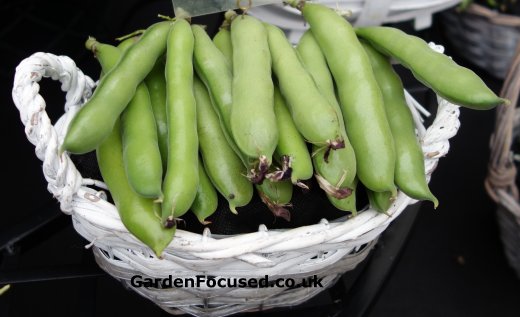 An old variety which has retained its popularity for over 130 years. This is a long pod type (pods are typically 18cm / 7in long) which has an average of 8 beans in every pod. The yields are excellent and the taste is always highly rated. They freeze very well. The flowers are pure white with purple markings. The plants grow taller than most (1.5m / 5ft is no unusual) so they may need staking in exposed areas. 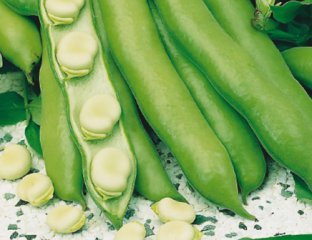 Bunyard's Exhibition seeds are widely available online though not so common in garden centres.

Bunyard's is often displayed at garden shows and this is OK if the show is during June  / July time. For vegetable shows in the more traditional September time broad beans are a problem because they are suited to colder weather than our summer produces.

For exhibition of broad beans in September we would recommend adding two months to the sowing dates above and positioning the plants well out of the full sun. Keep them well watered to reduce the soil temperature as far as possible.

If you plan to spring sow your broad beans then don't bother with this variety, others such as the Sutton and Bunyard's Exhibition are far more tender and tasty. But if you are determined to autumn sow your broad bean seeds (we don't recommend this) then Aquadulce Claudia is the variety to choose. They are the hardiest of all by a long way and more likely to succeed compared to any of the others.

If you believe, as we do, that most broad beans taste about the same then stand out from the crowd by growing this rather unusual variety. The pods are a quite normal dark green but the beans inside are a mahogany-red colour. 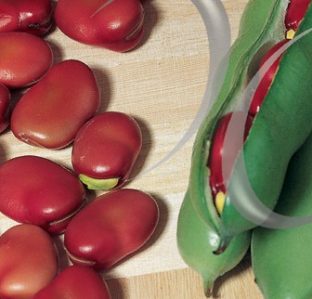 The plants grow well and are just as prone / resistant to diseases as most other varieties. The key question of course is do the beans of Red Epicure loose their colour when cooked? If you lightly steam them they retain a good portion of their colour but boiling them, even lightly, results in the colour very quickly leaching out. If you pick the beans when they are young and tender however they are more than good enough to eat raw in a salad. 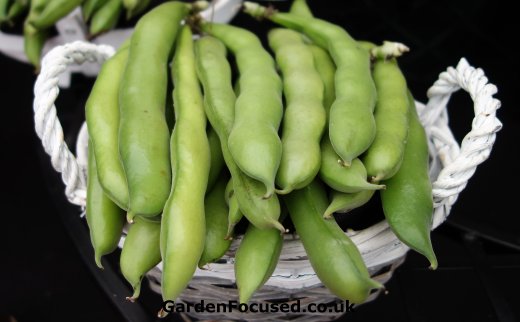 They are readily available online but not very common in garden centres. We found that Unwins sold these seeds at a good price this year.