GROWING ASPARAGUS IN THE UK

By David Marks
Asparagus may sound one of the more difficult vegetables to grow but in truth the main drawback is simply that it takes time to get from planting or sowing it to harvest, three years from planting asparagus crowns. Get over that hurdle and asparagus is very simple to care for and rarely attacked by pest or disease.

Consider as well the fact that it can easily crop for 10 years, and in many cases up to 20 years. The crop is produced in May to June time when not many other crops are available.

The calendar for asparagus is relatively uncomplicated which simply reflects the fact that it requires so little effort to care for it.

CALENDAR FOR GROWING ASPARAGUS IN THE AVERAGE UK AREA

Before using the calendar below, why not adjust it to your weather conditions?

Not only will the calendar below be correct for your area but all dates in this site will also be adjusted. Your setting will last for six months or more and still be set when you revisit this site. If you prefer not to adjust the dates they will be the average for the UK.

Sow seeds inside - the first week of March

Stop harvesting - the last week of May

Cut down yellowed foliage - when foliage yellows in October


ASPARAGUS FROM SEEDS OR CROWNS?


Asparagus crowns are simply asparagus plants which have been dug up. When you buy them they look rather sorry for themselves, rather shriveled and insignificant but that it how they should be. Asparagus can also be grown from seed and there are a couple of advantages and disadvantages to each method. The key differences are:

All asparagus crowns are not equal. Some suppliers skimp on packaging - we bought some asparagus crowns from Dobies and they were delivered in sealed plastic bags. Not a very good idea because they began to rot after two weeks.

Some suppliers clip the roots (see the picture below) and some don't. Some crowns are of good quality and others have been badly grown or stored. We recommend Crocus if you are buying online and want quality crowns, correctly packaged and at a reasonable price.

Asparagus varieties we would recommend are 'Ginlim' (RHS Award of Garden Merit), 'Pacific 2000' and a late variety to extend the season, 'Guelph Millennium'. All are available from Crocus.

If you buy asparagus crowns to early, before the weather is OK to plant them, they may produce sprouts if they are not stored in very cool conditions, see the picture below. 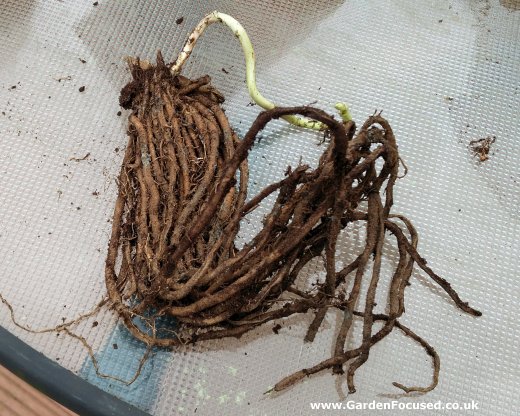 If your crowns do sprout, still plant them as described in this article but be aware that the sprouts may end up above the soil surface or very near the surface. The sprouts are frost tender so take this into account and plant later than normal to avoid frost damage.


There are a couple of points to note when actually planting asparagus but ground preparation is the most important aspect. Position the asparagus bed where it gets as much sun as possible and consider that nearby shrubs and trees may well grow larger and cast a shadow. Your asparagus bed could well be productive for 20 years, so forward planning will pay dividends. 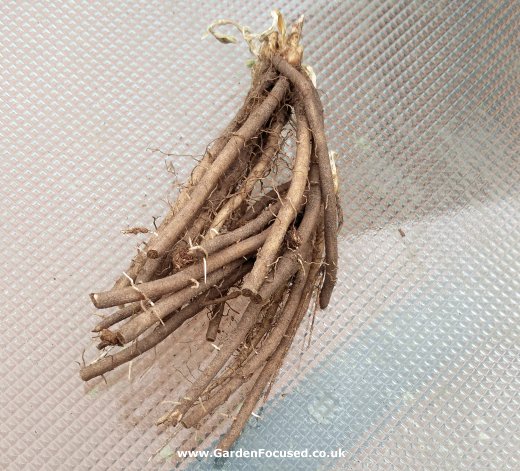 Because asparagus have very shallow roots they need to be weeded by hand so prepare the ground well beforehand by removing all weeds. Dig the ground to a spade's depth and add lots of well-rotted organic matter. Asparagus do not grow well in water-logged ground so if the soil is heavy also add in some sharp sand to further improve drainage.

Some articles advise preparing the area in autumn to let the soil settle before planting. We can't see the logic in this however because planting involves digging a trench which will loosen up the soil at planting time.

Some methods plant the crowns lower than the surrounding ground and, as the stems grow, fill the top of the trench around the growing asparagus. This seems unnecessary to us and more work than is really required.

The ideal time to plant new asparagus is the first week of April. We don't recommend planting them in autumn (although they are also sold at that time of year) because the young crowns are more likely to suffer from water logging. In addition, the crowns sold in autumn will not yet have gone into dormancy reducing your chances of success. Follow these steps:

If you buy your plants well in advance of planting them, keep them at a temperature as close to freezing as is practical. If stored in warm conditions the crowns will sprout shoots and these will be vulnerable to frost damage at planting time.


Asparagus an easy maintenance vegetable to grow and require very little attention throughout the year. The key tasks are:


Asparagus are shallow rooted plants so they will need to be watered occasionally when conditions are unusually dry. As with most vegetables, a thorough drenching with water once is better than several. Feed once a year with a long lasting fertiliser such as blood, fish and bone. One good handful per plant should be sufficient.


Regular weeding will need to be carried out to stop the weeds taking moisture and nutrients from the soil. It's best to weed often because hoeing is not really an option, it will probably damage the asparagus roots which grow near the surface.


Mulch once a year in autumn with well rotted compost or similar material. This will not only insulate the crowns from the worst of the winter weather but will also suppress many of the weeds and conserve water in the summer.


When the foliage turns yellow in autumn cut it down to 5cm / 2in above ground level. If you don't prune in autumn the stronger winter winds may well pull some of the roots out of the ground and damage the crowns. Don't prune before the foliage is yellow, green foliage will still be absorbing energy and storing it in the roots.

WHEN AND HOW TO HARVEST ASPARAGUS


Asparagus tips should be harvested when they are about 15cm / 6in tall. If you let them grow larger than this much of the tenderness and flavour will lost. As a rough guide, harvesting can normally begin in mid April onwards but let the appearance and size of the spears be your guide.

When an established asparagus bed starts to produce a crop you need to check it and harvest every two days because the spears grow so quickly, 5cm / 2in a day is not unusual. 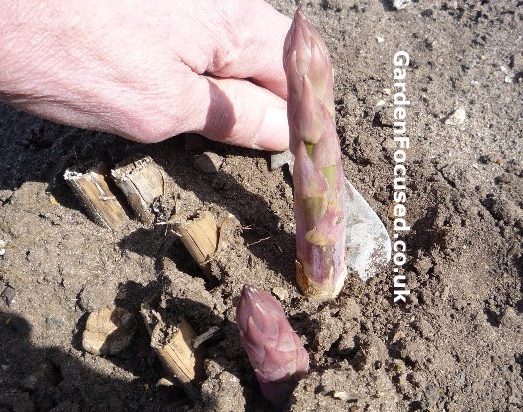 Stop harvesting in the last week of May and allow the remaining spears to grow tall and produce energy absorbing foliage. Do not harvest asparagus plants in their first year of life and only harvest four spears per plant in the second year. After that, harvest as described above.

To harvest, take a sharp knife and cut the spears off about 3cm / 1in below the soil surface. Asparagus is like sweetcorn, the minute it is harvested it begins to loose sweetness. For the sweetest and tastiest spears, cook and eat immediately after harvesting. If that's not possible store in the fridge or freeze.


For most, asparagus are very healthy plants but slugs, asparagus beetle and occasionally moles do cause problems.

SLUGS - Asparagus are not their first choice but the tips of the spears can sometimes be eaten. Use your favourite slug repellent / trap to solve the problem.

ASPARAGUS BEETLE - Immediately recognisable, these are black and white on their back, with orange on the lower sides and near the head. They are 6mm to 7mm long so are readily visible. In spring when the young shoots begin to appear the beetles lay their eggs (light brown and long-oval shaped) on the spears (remove the eggs by hand as well) which feed on the young spears. Several generations can occur each year and the adults feed on the foliage as well as the spears.

The first course of action is to pick off any you see, in most cases this will get rid of them. The adults are most active in the afternoon.

Clear up the foliage at the end of the season and remove any other leaves and debris around the plants at the same time. The beetles hibernate in debris around the plant. If that doesn't work, spray with a pesticide containing pyrethrum which should be applied just as the spears appear above ground and up to 6 weeks after that.