JAPANESE MAPLE TREES IN THE UK

Article by David Marks.
INTRODUCTION
Japanese Maples have been cultivated in Japan from the late 1500s. Their popularity increased and has led them to being cultivated in many other parts of the world over the last 150 years or so. The definition of a Japanese Maple tree is not easy because there are several systems of classification in existence at the moment. Indeed, the currently favoured classification system devised by P. C. de Jong identifies only three subspecies of acer palmatum. This site concentrates on acers which can be bought in nurseries and garden centres. Generally, the horticultural trade names them Acer palmatum and Acer japonicum.


SPELLING
Another common problem with identifying a particular Japanese Maple is that many of them are English interpretations of the original Japanese name. Unfortunately several Japanese sounds are not represented in the English alphabet and more than one spelling exists. This difficulty is slowly being eradicated however as plant naming conventions are increasingly becoming standardised world wide.

SEASONS OF INTEREST
From early October through to late November many Japanese Maples are transformed in a blaze of red and orange leaves. This occurs at a time when most other ornamental plants and trees have long passed their best.

This is a spectacular show but from April to September Japanese Maples also delight with their overall form and the colours, textures and shapes of leaves. So consider what your tree will look like in the six months prior to October to gain the full benefit from these spectacular trees. 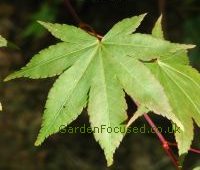 SIZE AND FORM
Japanese Maples are unusual as a group of trees in that they span a huge varieties of sizes. Left un-pruned the acer palmatum can easily grow to 12m / 40ft high. At the same time, the dwarf varieties, such as Koto Maru will never exceed 1.5m / 5ft in height. Combine this with a variety of habits, from weeping to upright, and it is clear the choice is huge with many varieties suitable for all types and sizes of garden. 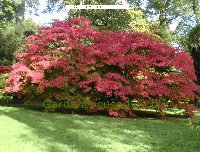 WHICH MAPLE TREE FOR YOUR GARDEN?
Probably the best place to start selecting a Japanese Maple tree for your garden is in our picture gallery. This shows pictures of a large number of Japanese maples with brief details. Click on any picture for lots more details about that particular Japanese Maple.

CULTURE OF JAPANESE MAPLE TREES
This site covers a wide variety of cultural advice from propagating your own Japanese Maples to growing them in the garden or in containers. Use the links at the top left and bottom of each page to navigate to the different topics.