Expert Advice on Getting Rid of Couch Grass

Article by David Marks
Couch grass (Latin name Elymus repens) is a quick growing, invasive type of grass which appears to contribute nothing to the overall appearance or productivity of a garden or allotment. Another commonly used name for this weed is Twitch Grass. It is a pain in the neck in your garden and mine, nothing more, nothing less.

This article explains several methods, organic and chemical, for removing and eradicating couch grass. Use the navigation box below to skip to the section most important to you if you don't have time to read the entire article.

Kill it with chemicals

Smother it to Death


HOW DOES COUCH GRASS GROW

Some background information about how couch grass grows and the conditions it prefers is always useful in fighting such a powerful weed.

Although couch grass is considered a weed by UK gardeners and allotment holders it does actually have a use in some circumstances! Firstly, in some parts of the world couch grass is encouraged because it is a primary source of food for cattle and other animals. Its second most common use is to bind soil together to prevent erosion by wind and water.

Couch grass arrives in your garden or allotment initially by two means. By far the most common is through small root parts in the soil of plants which are transferred to your garden.

The second is by means of seeds. Insignificant flowers are produced in July / August time and these form seeds which can be spread by wind, water and carried on wildlife such as birds. Once it arrives in your garden however, forget about it spreading via seeds, it is the roots which enable it to colonise large areas quickly. 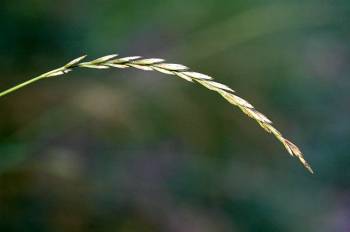 When a root establishes, it send up grass stems, typically every 5 to 10cm along the root. The grass stems absorb energy from the sun which allow the roots to grow further. The roots store unusually large amounts of energy and they can continue to grow and survive for long periods of time without energy from the sun. Eventually they will die if they do not receive sunshine.

Because of its ability to begin growth early in the season couch grass can smother other plants before temperatures are high enough to establish themselves at the beginning of the season. This weed also absorbs large amounts of nutrients from the soil making it difficult for other plants to grow well.

Couch grass roots also secrete acids and other phytotoxins (poisons for other plants) which reduce the ability of surrounding plants to absorb nutrients from the soil. This has a direct impact for gardeners not only when the grass is growing but also when it is killed (rather than removed) by herbicides or excluding light. The reason for this is that, as the roots of Couch Grass decompose, they still secrete phytotoxins which can damage new plants.

Very little conclusive research has been conducted on how long these phytotoxins remain in the soil after couch grass has been killed. Our investigations suggest that the ground is partially "poisonous" to new plants for a month or so after couch grass is killed. The best research we could find was this document here.

The solutions we propose below to eradicating couch grass are based on three situations:

Herbicides are garden chemicals designed to kill plants, such as Couch Grass, which produce green growth above ground. The most effective herbicides (by a very large measure) available to amateur gardeners in the UK for killing grass have the key chemical ingredient glyphosate. This chemical is extremely efficient for killing grasses but it also has some potential disadvantages which are:


If this method of killing glyphosate is to be used on large areas we suggest that it is most effective when the following method is used:

KILLING COUCH GRASS BY SMOTHERING IT

Where medium to large areas of ground, such as an allotment or the end of a garden, are over-run with couch grass and other weeds this method works well with minimum effort although it will take a season to completely clear ground.

It is often used in conjunction with the "dig it out" method in the next section. One patch of weeds is smothered and another area, required in a shorter time, is dug.

Smothering couch grass and other weeds works on the basis that if all light is prevented from reaching them, they will die. For best results, cover the weeds for nine months to a year. Lots of material can be used to cover the weeds, the most common are listed below:

When the weed suppressant has killed the weeds it can be stored away for later use and the ground can be dug and cultivated as normal.

This is the most labour intensive way to clear a medium to large sized area of couch grass and / or other weeds. It involves digging the area to a depth of about 15cm to 20cm (6in to 8in) deep with a fork. As you dig, break up the soil and the roots of couch grass (and most other weeds) can be removed.

This won't get rid of 100% of the weeds because some will inevitably be overlooked but if you keep an eye out for re-appearing weeds over the next month or so then they can easily be pulled out, mostly intact, from the freshly dug ground.

The downside is of course the effort involved but you need to consider that, whatever method you use, the ground will still need to be dug at some stage before planting crops or ornamental flowers. The extra effort of removing the couch grass roots during digging is, in our opinion vastly over-stated. You will also end up with soil of an excellent texture.

Probably the most difficult situation with Couch Grass is where it has invaded an area already containing ornamental plants or vegetables. Clearly, in this situation spraying with chemicals is not an option because, however careful you are, overspray will also kill existing plants.

Our suggested method is to first carefully cut away any grass foliage above ground. Then use a trowel to gently dig around the plants and remove as many grass roots as you can without damaging the roots of existing plants.

Finally and most importantly, then use weed-suppressant fabric or black plastic to cover the area. Cut holes or slits in the fabric to allow it to go around the stems of plants as near as possible. The weed-suppressant fabric can be left in place in place indefinitely because it is designed to allow rainfall to pass through to the soil below. Hold it in place (and disguise it) with a thin layer of soil.

If you use black plastic to cover the ground around plants be sure to pierce it in lots of places to allow moisture to sink into the ground below. This will inevitably allow grass stems to re-appear but they must then be removed by hand.

Below is a list of facts of facts about couch grass which are probably useless, but who knows, they may may open up a weak point in the growth cycle of this weed to you that others have not spotted.
MAIN SHRUB INDEX

We have temporarily disabled more questions because we are unable to cope with the workload of answering them at the moment. We are seeking more staff to help with this problem.