How to Grow Hydrangeas

THE RIGHT HYDRANGEA FOR YOUR GARDEN

By David Marks
There are so many species and varieties of hydrangea, it is important to select the correct one for your garden. This article identifies flower types size and colour, how big they will grow and which position suits them best.

All the information is presented in very easy to understand language so it is suitable for novice gardeners as well as those with some experience of gardening.

The most common of all hydrangeas seen in UK gardens. The names mophead and lacecap refer to the shape of the flowers as shown below. Note that mophead hydrangeas are sometimes referred to as Hortensia hydrangeas. 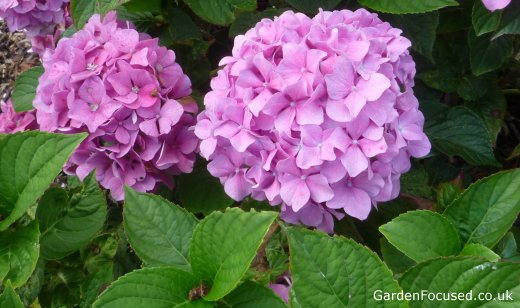 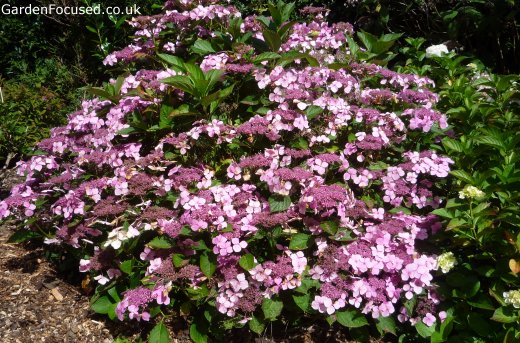 Lacecap hydrangeas (example above) have much flatter flowers which are also smaller than a mophead. Their appearance is far more delicate.

The appearance of their flowers is the only significant difference between mopheads and laceheads. All macrophylla hydrangea flowers are affected by the acidity or alkalinity of the soil. Acid soils will tend to produce blue flowers and alkaline soils tend to produce pink flowers. Flower colour is very variable in neutral soils.

Flowers are produced in late August to late October and grow from buds and stems produced the previous year. Pruning is normally minimal unless the centre of the shrub has become congested.

Height and spread of a macrophylla hydrangea is roughly 1.6m / 5 ft but there are differences so read the plant label before buying.

They prefer a moist, fertile soil which is in partial shade (avoiding the full afternoon sun) and a position protected from strong winds. Clay and loam soils are best for them, they will struggle for enough moisture in sandy or chalk soils unless it has been improved.


Probably the second most common hydrangea grown in the UK. They are similar to the macrophylla hydrangeas above with the following notable differences: 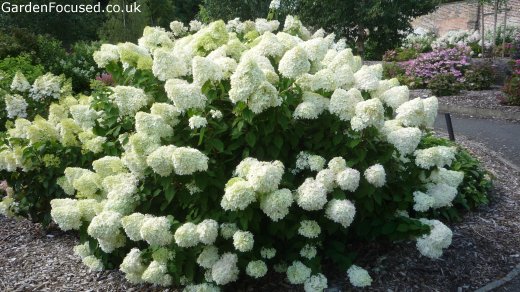 Hydrangea serrata are very under rated in our opinion especially if you have a small garden or want to grow hydrangeas in containers.

These shrubs tend to grow to around 90cm / 3ft high and are covered in lacecap type flowers from late August to late October. 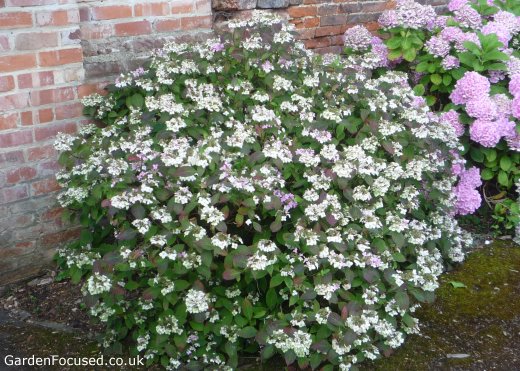 This is an east American type of hydrangea and the flowers are normally white and very large - too large for our personal preference. There is one variety widely available in the UK, 'Anabelle'. Great for spectacular pictures but needs careful attention especialy for the first three years or so.

They grow to 2m (7ft) high and wide, producing flowers on the current year's growth. Pruning is minimal in late winter / early spring.  Flowers are white, and can reach 30cm / 1ft wide. This causes the stems to be weighted down and droopy. 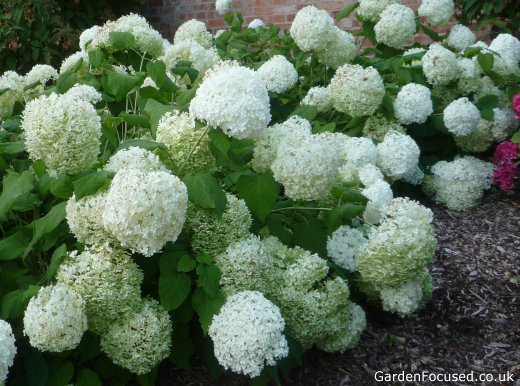 The above sections have described the different species of hydrangeas which are commonly available in the UK. Having selected a species which suits your requirements, it's now time for you to select a particular variety for your garden.

This is not as easy as it sounds because of the huge number of varieties available. However, this section will attempt to give you some guidance and tips on selecting the best variety for your garden. The final choice is up to you.

First, let's include or not include one of the species, hydrangea serrata. If you want to grow a hydrangea in a container then this species would be our choice. The variety we would choose would be 'Bluebird'. This would also be our choice for smaller gardens.

Another superb hydrangea which can be grown in a large container is Hydrangea paniculata 'Pinky Winky' which reaches a height of 1.2m / 4ft or even less with regular pruning.

If a lacecap hydrangea is more to your taste (rather more delicate compared to the mopheads) then a good choice is Hydrangea macrophylla 'Mariesii Perfecta'. It has been the lacecap of choice in the UK for over a hundred years and it is still as popular, with good reason, as it always has been.