Is Gaultheria Right for my Garden?

Where and When to Plant Gaultheria

How to Care For Gaultheria

Where to Buy Gaultheria

Article by David Marks
Gaultheria procumbens makes an excellent evergreen shrub, growing to only 30cm / 1ft high. Small white / pink flowers in July and August then red berries into late autumn. The foliage turns reddish in winter. There are several forms of Gaultheria though procumbens is one of the easiest and most useful to grow in the UK. They originate from North America. It is sometimes known as the Checkberry plant.

Use the checklist below to decide if Gaultheria procumbens is the correct plant for you and your garden:

HOW TO PLANT A GAULTHERIA PROCUMBENS


Follow the steps below to ensure your Gaultheria is planted correctly: 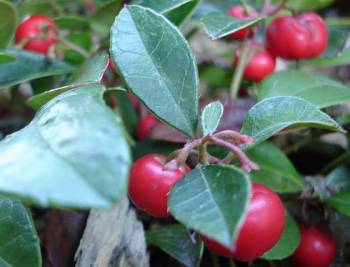 
When established a Gaultheria procumbens will look after itself. It needs watering in dry conditions and we suggest that natural rainfall is best rather than tap water. It will grow quite happily on average ground without the need of additional feeds. Pruning is not required for the first three years. After that, dig up the shallow roots where it is beginning to spread too far. This can be done at any time of the year.

For younger plants up to two years old, water if conditions become dry. A twice yearly feed with blood, fish and bone in spring and autumn will help it to establish a good root system. Keep the area around the base of the plant free from weeds and grass. Clear leaves and other debris which falls on them. There are no common pests or diseases of this plant.


When first planting them use ericaceous compost which is slightly acidic. After that treat them as normal.

The plant should be fed monthly between mid March to mid August with a handful of blood, fish and bone. It will of course require regular watering. Wait each time until the top 3cm of the compost is dry and then water well.

WHERE TO BUY GAULTHERIA PLANTS

Many garden centres sell Gaultheria especially from August to November when the attractive berries are present. They are also commonly sold online. Crocus sell these plants at a good price, in tip top condition and they have our personal recommendation.

Below we list the key strengths and weaknesses of Gaultheria.