Is Forsythia Right for my Garden?

Where and When to Plant Forsythia

How to Care For Forsythia

How to Prune Forsythia

Article by David Marks
Forsythia are so widely grown in the UK that they often overlooked nowadays. But they produce spectacular yellow flowers in early spring, are easy to maintain and very healthy shrubs. They also grow quickly so can be used as screening plants which will do their job much faster than most other shrubs. 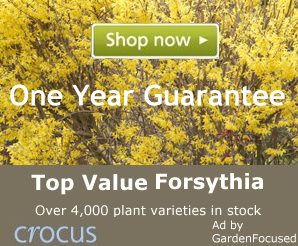 Use the checklist below to decide if a Forsythia is suited to your preferences and garden conditions:

HOW TO PLANT A NEW FORSYTHIA

Follow the steps below to ensure your Forsythia is planted correctly and in the best position: 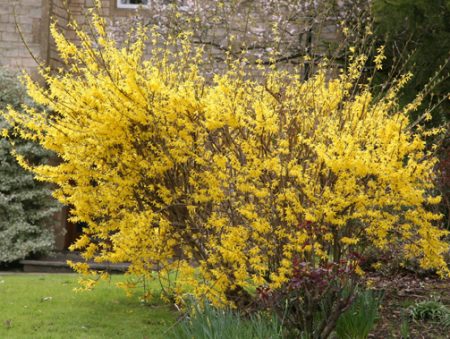 If you want to grow Forsythia as a dense hedge, individual plants should be about 1.2m / 4ft apart. We don't recommend forsythia as a hedge because it goes against its natural form of growth. For hedging we would recommend  Berberis, Euonymus or Photinia.


Forsythia are vigorous shrubs and the only care required, after they are established, is to prune them (see section below) correctly to encourage flowering in spring time. They are naturally deep rooted and will search out moisture well below the soil surface. On poor soils a couple of handfuls of blood, fish and bone per plant in April and September time will help feed the finer roots near the soil surface.

For younger plants up to two years old, water if conditions become dry. A twice yearly feed with blood, fish and bone in spring and autumn will help it to establish a good root system. Keep the area around the base of the plant free from weeds and grass.

HOW AND WHEN TO PRUNE FORSYTHIA


Although an established forsythia bush can be safely cut back virtually to the ground, if you want to maximise flowering it's best to prune them annually.

For the first two to three years after planting a new forsythia, let it fill out and don't prune it. This will help it establish a good root system.

In the third or fourth years onward prune forsythia as follows:


Forsythia are not suited to growing in containers, they are simply too large and too vigorous. There are a couple of companies selling dwarf varieties in the UK and claiming they are good for containers but these varieties are not sold by any of the better known companies and for good reason.

We would suggest a Philadelphus / Mock Orange as an excellent alternative for container growing. Even more flowering potential and they can easily be kept to the size of the container.

PESTS AND DISEASES OF FORSYTHIA


Your forsythia is unlikely to be affected by diseases although Forsythia Gall and Capsid Bugs can occasionally be a problem - see below. The main problem which can affect them in some areas is that of birds, often finches, eating the buds.

It's not particularly common but in some locations birds can feed on the buds of forsythia. Unfortunately, when they find this source of food they tend to come back again for more! They normally only eat the higher buds because they are afraid of predators if they go too low.

There really is no preventative measure to stop this. You could try netting the forsythia until the flowers appear but it sounds like too much work for us.

The symptoms of Forsythia gall are light brown raised growth areas on the stems with a ragged surface. They are easier to see and cut out in winter or spring when the foliage is not present. They are caused by the fungus Phomopsis. 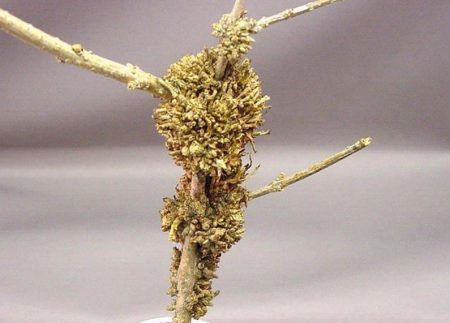 There is no chemical sprays or treatments available to kill the fungus so the best course of action is to cut affected stems away to reduce the spread. Cut cleanly about 10cm / 4ins below the gall and burn the stems to prevent re-infection.

Damage from Capsid Bugs is almost always noticed after the bug has disappeared and started to damage another plants. The flowers will show damage to the edges when they emerge, sometimes with holes in the petals. The leaves are also often attacked and show small holes in them which can be quite extensive. They are most common from May to August.

If you suspect that Capsid Bugs will damage your forsythia then spray regularly with an insecticide such as Scotts Bug Clear or Doff All-in-One Garden Pest Killer.

The development of new varieties of Forsythia is very limited because the few varieties currently available are hard to better. We recommend three below which offer spectacular spring colour.

The classic Forsythia which is less likely to suffer from gall compared to others. Masses of bright yellow flowers are almost guaranteed every year. The height at maturity is 2.25m / 8ft with a similar spread. Regular pruning can reduce the size by about 25%. It grows upright and responds well to even the most amateur pruning. Has an Award of Garden Merit. Available online from our recommended suppliers Crocus here with a five year guarantee.

Flowers appear a week or two later than Lynwood and last a week or two longer, they are also slightly larger. The height at maturity is 2.25m / 8ft with a similar spread. This variety was bred in Germany and flowers well on one year old stems, earlier than other varieties which flower on two year old wood. One of our favourites, available from our recommended suppliers Crocus here with a five year guarantee.

Below we list the key strengths and weaknesses of Forsythia.

Sometimes our readers ask specific questions which are not covered in the main article above. Our
Forsythia comment / question and answer page
lists their comments, questions and answers. At the end of that page there is also a form for you to submit any new question or comment you have.