Is Choisya Right for my Garden?

Where and When to Plant Choisya

How to Care For Choisya

How to Move a Choisya

How to Grow Choisya in Containers

Article by David Marks
Mexican Orange Blossom (Choisya ternata) is grown not only for the masses of beautiful flowers in late April to late May but also for their foliage which, in the case of Choisya ternata Sundance, is a delicate yellow to lime green colour.

The foliage is evergreen although it looks at its best from March to November.

Choisyas originate from Mexico and surrounding areas and were introduced to Europe in 1826. They are named after Swiss horticulturalist Denis Choisy. 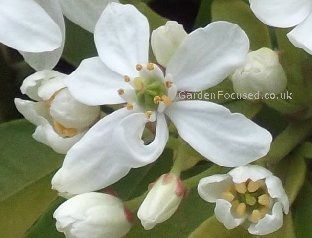 Use the checklist below to decide if a Choisya is suited to your garden conditions.

HOW AND WHEN TO PLANT A NEW CHOISYA


Follow the steps below to ensure your Choisya is planted correctly:


There are three varieties of Choisya / Mexican Orange Blossom commonly grown in the UK (ternata and dewitteana) and one which is less common but easily available from garden centres and online. These are:

- The original plant and it produces flowers more easily than the other two. The leaves are green and the flowers pure white. It's also the most likely to produce a second flush of flowers in autumn. The best variety if you only have a semi-shade position. 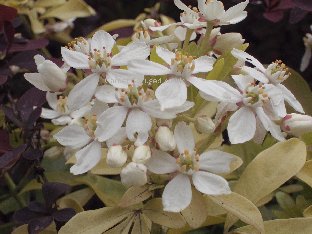 We recommend Crocus as your online supplier of Choisya ternata.

- This variety has been available for many years and it also produces masses of flowers in late April to late May however not quite as many as Choisya ternata. The second flush in autumn is also produced less frequently. The benefit however is the delightful lime green colour of the new foliage. 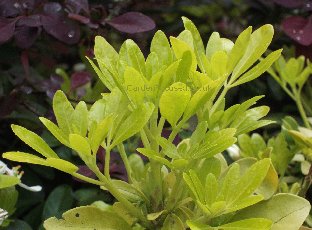 - the same as Choisya ternata above but really does best in full sun.

- the leaves are dark green (lighter coloured when they first appear), long and thin.  Flowers are pure white, produced all over the plant in late April to late May with a second smaller flush in September time. Each flower has attractive and prominent golden coloured stamens at the centre. The flowers have a marked citrus scent.

Similar in many respects to Choisya dewitteana 'Aztec Pearl' above but lower growing and will not need pruning. This is most definitely an easy shrub to grow. At maturity it reaches about 1.2m (4ft) wide and high. This is the hardiest of all the Choisya varieties and quite capable of withstanding even the harshest northern winters.

Choisya White Dazzler, like the other varieties, is not choosy (pun intended!) about soil conditions and will grow almost anywhere as long as it gets a good dose of sunshine. They make excellent pot / container plants retaining their shape well.

In 2015 this plant made an appearance on Gardeners World which created very high demand, many garden centres running out of stock. Click here to buy Choisya dewitteana 'White Dazzler' online from your GardenFocused recommended supplier.

- as Choisya dewitteana 'White Dazzler' above but with lime green / yellow foliage.

HOW TO CARE FOR YOUR CHOISYA


All Choisyas require the same care which is almost nothing thankfully once they are established! 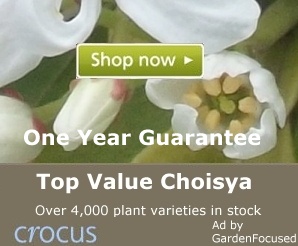 The key point with Choisyas is to select the correct position when you plant them. Chose a position which is in as much full sun as possible and also protected from strong winds.

Choisyas are frost hardy down to -3°C / 26°F but will stand a couple of degrees lower if they are protected from winds. Wind and cold combined are the true enemies of this shrub when grown in many parts of the UK.

Improve the soil by digging in some well rotted compost and allow enough space for them to grow to 1.8m (5ft) wide and tall (see the variety descriptions above for more compact varieties).

Water in well and ensure they do not dry out in the first year, from then on they will look after themselves.

Weeding around the base of the plant will help them on, although once established their foliage smothers most weeds growing under them. They don't need to be pruned and will form a dense, mound shaped shrub. An annual mulch with well-rotted compost (grass clippings also do a good job) in early April will conserve moisture throughout the year and provide some additional nutrients. If you need to keep them in shape or size, the best time to prune them is immediately after they have finished flowering, normally mid-June time. 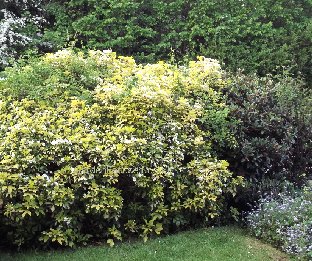 
Choisyas are relatively easy shrubs to move successfully, it just needs a bit of planning if they are large plants.

The potential problem with moving even easy to move shrubs, such as Choisya, is that the roots will always be damaged to some degree when digging the shrub up. If too much damage is done, the roots may not be able to extract sufficient water to support the top growth.

The solution is to prune your Choisya in June time and then move it in early autumn. This will reduce the amount of top growth which the roots need to support.

The best time to prune a Choisya is mid June. Yes, some of the flowers will still be present but the initial burst of colour will have passed. It's fine to prune the plant up to about half of its original size. While you are doing that, look at the centre of the shrub and remove some of the older stems. When you do this, you will see lots of new growth, leave that alone.

Water well and sprinkle two or three handfuls of fish, blood and bone fertiliser on the surrounding soil. This will help the shrub to recover from pruning as quickly as possible.

Next, in early autumn, mid to late September is ideal, go about moving your Choisya. Choose a day when rain has recently fallen.

Don't forget that they are only partially frost hardy, so choose a sunny and protected position. Dig up the shrub with as much of the rootball intact as possible. You will now have an idea of the size of the hole you need to dig in its new position.

Dig the new hole just slightly larger than the rootball, place the Choisya in the hole to the same depth as it was previously. Fill in around the rootball with dug soil and firm it down with your feet. Water the shrub in well. The root balls of a Choisya are not particularly extensive.


Choisyas can be grown in containers although they do need a bit of care in the winter. Potted plants are more susceptible to frost damage compared to those in the ground so we recommend placing your potted Choisya in a porch, open garage or in a protected position up against the house during the winter - November to March ideally. If the weather is predicted to be really cold then they can be temporarily moved into a garage for a week or so. The lack of light is not ideal but will have no visible affect if limited to a week or so.

The other consideration with growing Choisyas in pots is size, both the size of the container and the size of the shrub. The larger the container the better for you and your plants because large containers require less frequent watering. When choosing a Choisya for a container we would recommend one of the slower growing varieties such as Choisya dewitteana 'White Dazzler'. It will require much less pruning to keep to size compared to some other varieties.

Plant in normal multi-purpose or John Innes compost using a container size (width) of about 40cm / 16in. The larger the container, within reason, the better. Container grown plants dry out easily in warm weather and may need watering two or more times a week in very warm weather. A handful of blood, fish and bone fertiliser every month from April to September will provide sufficient nutrients for a healthy plant.

As with all plants grown in containers and pots, frequent watering will be required especially in warm weather. Choisyas are relatively resistant to drought but they have their limits! Rainwater is better compared to tap water. A water butt is the ideal solution.


Choisya are remarkably pest and disease free, any problems with die-back of the foliage is almost always caused by cold weather. In most cases the plant will recover completely in spring. Occasionally snails attack the bark and foliage and the solution is either to sprinkle slug / snail pellets around. Alternatively sprinkle dry multipurpose compost around the base of the plant, snails hate that because it dries out their slime very quickly and stops them moving.

Other "easy-care" shrubs and perennials in this series include Camellia, Hellebore, Skimmia, Hebes, Mock Orange, Lilacs, Potentilla, Pittosporum and Rose of Sharon (hibiscus syriacus). Click here for a full list of the shrubs we have reviewed in detail.

Below we list the key strengths and weaknesses of the Mexican Orange Blossom.