Is Berberis Right for my Garden?

Where and When to Plant Berberis

How to Care For Berberis

Article by David Marks
Berberis thunbergii are deciduous (drop their leaves in winter) shrubs which provide not only highly coloured leaves in autumn but often berries which last well into winter. They range in size from half a metre to one and a half metres high and spread. They grow well in full sun or partial shade and are often used as a tough barrier hedge because of their vicious spines. They are often referred to as barberry bushes.

They originate from Japan and parts of Eastern Asia but are commonly grown in almost all countries around the world. For some odd reason they are rarely found in Australia.

Use the checklist below to decide if Berberis thunbergii the correct plant for you and your garden: 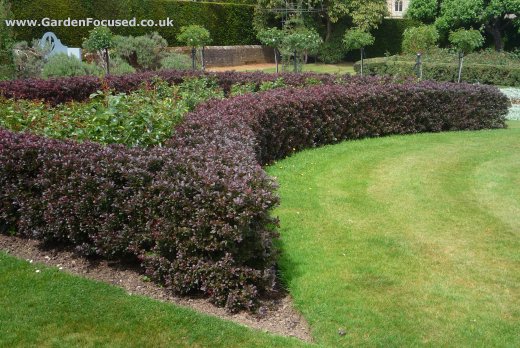 WHERE TO BUY BERBERIS

Many garden centres sell Berberis thunbergii especially from April to May when they are in flower. They are also commonly sold online. Click the picture below for buying Berberis online at our recommended supplier. 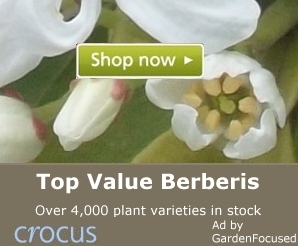 See lower down this article for a few varieties which we can recommend from personal experience but almost all varieties grow well in the UK so choice comes down to personal preferences.

HOW TO PLANT BERBERIS


Follow the steps below to ensure your Berberis is planted correctly:


When established a Berberis will look after itself. There is no need to feed them unless the ground is very low in nutrients. Neither is watering required except in severe drought.

They do appreciate a mulch of well-rotted organic matter applied in late spring. Anything from grass cuttings to well-rotted compost will do fine.

For younger plants up to two years old, water if conditions become dry. A twice yearly feed with blood, fish and bone in spring and autumn will help it to establish a good root system. Keep the area around the base of the plant free from weeds and grass. Clear leaves and other debris which falls around them. There are no common pests or diseases of this plant.


The varieties below are our own personal favourites.


Red-orange foliage with a yellow edge to each of the leaves. The foliage appears in early spring through too the first frosts and deepens throughout the year. It forms a very attractive and firm mound shape, often with small yellow flowers followed by purple-crimson berries in autumn. 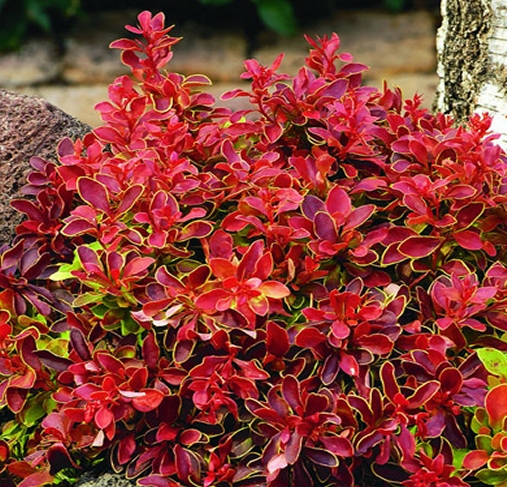 This variety is almost maintenance free requiring only a five minute prune in spring top keep it in shape. It grows to a maximum height and spread of 50cm / 20ins making it ideal for small gardens or container growing. Click here to buy this variety online now from our recommended supplier.


Dart's Red Lady has three distinct colour phase throughout each season. When the the leaves form in spring they are red-purple. As summer approaches they turn to deep green and finally to bright red from early autumn to early winter. They also produce tiny flowers in spring and berries in autumn. The variety reaches a maximum size of 1.5m but can be kept smaller with regular pruning.


The leaves are a beautiful shade of green for much of the time, with a pink flush to them autumn. The branches are upright and with an annual prune this shrub can fit into even small gardens. Eventual height if not pruned is 1.2m with a similar spread as the picture below shows. 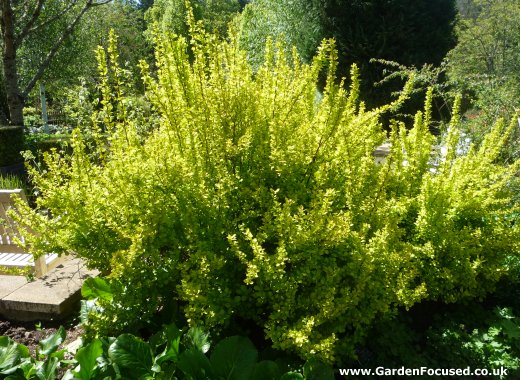 The flowers are not very noticeable however red berries appear in autumn. It does well in both full sun and partial shade.


Only introduced in 2012, Lutin Rouge is our favourite small berberis. It was found in a garden in France by chance, the parents are unknown. Mature height is 50cm / 20in with a spread of about 60cm / 24in. The leaves first appear in early spring and last to late autumn, bright red, they bring a splash of colour far better than many flowering shrubs.

Lutin Rouge requires only an annual prune to keep it to shape. It is unusual amongst Berberis in that it doesn't produce any flowers or berries but the foliage more than makes up for that. 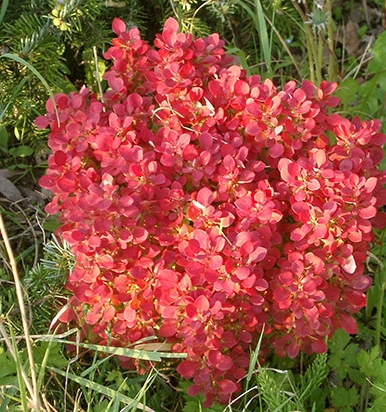 Click here to buy this variety online now from your GardenFocused recommended supplier.


The main need of berberis in containers is to water them so that the compost is kept moist but not water-logged. Rainwater collected from a water butt is the best source of water for hebes in containers.

From April to September a feed once every two months with a small handful of blood, fish and bone worked into the surface of the compost. In winter place the plants where they out of the wind and have some frost protection - against the wall of a heated house will do fine or in an unheated greenhouse.

Below we list the key strengths and weaknesses of this shrub.