Plum jam is so cheap if you grow your own plums or, if you can, harvest the ones growing wild. You simply have the cost of the sugar, a lemon (optional) and the heat from your cooker. Remember before you start, that you will need some sealable jars for the jam.

We don't bother removing the stones from the plums before cooking, it's easier to do this as the jam is simmering and a final check when it boiling. A large slotted spoon is useful for filtering out the stones. The amounts below scale up or down well just keep to the same proportion of weights of fruit and sugar.

This recipe is the one we use to make our own plum jam each year. It is the culmination of three year's experimentation and is exactly how we like it, slightly tarter and fuller flavour maybe compared to some recipes. Leaving out the lemon juice results in a slightly sweeter jam. Increasing the amount of sugar to be the same weight as the fruit will sweeten it further as is the case in most recipes.

As long as you don't deviate from the main proportions too much this recipe will make exceptional jam. Any variety of plum (cooker, eater or growing wild) will be fine for this recipe.

This recipe will make about 5 medium sized jars of plum jam. If sealed and stored in a cool, dark place the jam will last for at least one year. A shelf life of two or more years is quite possible. 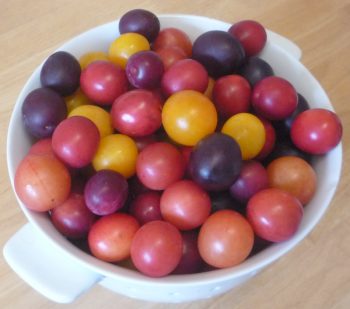 Place the plums in a large pan on a low heat and let them simmer (just barely bubbling). The plums will give off lots of liquid so no additional water is needed.

Let the plums simmer in their own juices for about 40 minutes. Stir them every few minutes to help break them up and ensure they are evenly softened. As you stir, use a slotted spoon to pick out the stones. 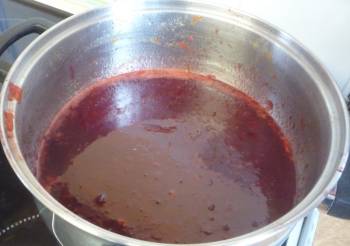 Add the lemon juice (optional) and sprinkle in the sugar. Stir well until the sugar is dissolved, about 5 minutes. Taste the jam at this point and add a little more sugar if it is too tart. Different varieties of plum contain differing amounts of sugar.

Turn the heat up high to start the jam boiling. Keep it like that for 12 minutes, stirring every minute to stop any jam sticking to the base of the pan. Make one final check to remove any remaining stones.

Take the pan off the heat to cool down while you sterilise the jars. 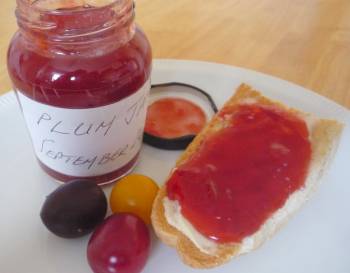 Fill the jars nearly to the top with jam and seal with the lid. Leave them to cool slowly which normally takes three to four hours. Label them and include date.

Plums are high in pectin so they can be combined with other low-pectin fruits when making jams to ensure that the low pectin fruits set. They can also be frozen and kept in the freezer for well over three months. Another recipe is a delicious plum crumble.