HOW TO PLANT POTATOES IN CONTAINERS

ALL IN ONE
MONTHLY CALENDAR

Before planting your potatoes in the container you need to decide if you will "earth up" or not as they grow. To earth up the potatoes is simply planting them in compost and when the foliage appears above soil level you cover it with more compost. This process is repeated until the compost reaches just below the rim of the container.

It's a fine balance between risk and effort against the opportunity to have potatoes in containers earlier than those grown in the open. So we recommend you estimate your last frost date (for example it's 5th May in Birmingham) and plant your seed potatoes five weeks before that date (which will be late March in Birmingham).

For two weeks after planting, the foliage will still be below soil level leaving you with a frost risk period of about three weeks.

Click here for what to do if a late frost threatens to damage your potato plants.

For example, the last average frost date in Birmingham (about average for the UK) is around 5th May. When we say "average last frost date" it means that a frost is statistically likely after that date in only one year out of seven. Using the above calculations of planting out potato seed five weeks before the last frost date we would plant out our potato seed towards the end of March.

Your last frost date depends entirely on where you are in the UK. Also be aware that frosts can vary considerably over very small distances. So take advice from more experienced neighbours in your area if you are not sure of your last likely frost date.

BENEFITS OF EARTHING UP POTATOES IN CONTAINERS
First, earthing up is only feasible if the container you are using is 60cm (2ft) high or more. Any less and it's best not to earth up. Also, it's not worth doing with first early potatoes (their growth is too fast) only with maincrop and second early potatoes. 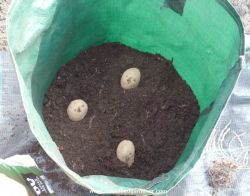 If you plan to earth up your potatoes then you need to fill your container to roughly one third full with general purpose potting compost. For a container 60cm (2ft) high by 30cm (1ft) in diameter place two or three seed potatoes on top of the compost with the eyes or the sprouts (if you have chitted your potatoes) uppermost. In some cases there may be eyes or sprouts on both sides (see left).

In that case, position the potatoes so that the majority of the eyes / sprouts are pointing upwards. 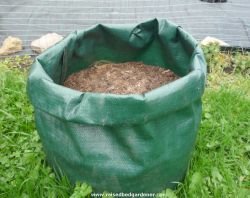 This will ensure that the sunlight can reach the foliage as soon as it pokes through the compost. It will also assist natural rainwater to land on the compost surface and be absorbed.

In either case, scatter a handful or two of blood, fish and bone (bonemeal will also do well) on the surface of the compost and lightly work it in with your hands. This can be done in a few days time if you do not have this fertiliser available at the moment. Blood, fish and bone or bonemeal are long lasting fertilisers which will feed the potatoes over a long period of time.

Depending on the variety of potato and the weather conditions, you should start to see foliage poking its way through the compost in about ten days time. Keep a watch for this because as soon as it happens the container must be placed in a position that receives the maximum light (if it not already in that position).

NEXT STEPS
Soon after the foliage of your potato appears above the soil it will be time to start the earthing up process and general care. Click that link below or the "next potato page" at the bottom of the page. If you want to skip to another subject in this series click on one of the links below.

PREPARING TO PLANT YOUR POTATOES