HOW TO CARE FOR POTATOES IN CONTAINERS

Potatoes grown in containers are easy to care for, having few needs aside from water whenever they need it and feeding at regular intervals. As with all container and raised bed grown plants though, those needs are magnified compared to open ground grown plants. One of the benefits though of growing potatoes in containers is that there is no need for weeding!

EARTHING UP
Earthing up (sometimes call hilling) will allow the production of more potatoes in a tall container. We discussed the pros and cons of earthing up in this previous page.


POSITION AND CLIMATE
The primary care need for the plants at their young stage is to prevent them suffering from frost. If the frost gets to the leaves they will be blackened and growth will be severely checked with lower crops and produced later in the year. If a frost threatens it's best to temporarily move the container to a frost free position. The potato plants won't suffer unduly if the have little or no light for a couple of days but they will be severely damaged if subjected to frost for only an hour or two.

Another trick with potatoes in containers if a frost threatens is to add more compost to the container so that the shoots are just covered. This will protect them from most frosts and they will easily grow through the compost in a few days without any ill effects at all. You are, in effect, earthing up at an earlier stage than you might normally do.

Frost aside, the best position for growing potatoes in containers is one in full sunlight and where the air is moving. Stagnant air, especially in damp conditions is a sure fire recipe for Potato Blight.

WATERING POTATO PLANTS IN CONTAINERS
The next essential for potatoes in containers at all stages of their life is water. Potato plants absorb a lot of water so be prepared to water your potatoes frequently, daily if necessary, in hot conditions. The taller the plants become the more water they will need.

When watering your potato plants try to aim the water at the base of the plant on the compost rather than the leaves. This will avoid leaf scorch and will also reduce the risk of potato blight because the foliage will not become damp.

FEEDING POTATO PLANTS IN CONTAINERS
If you have followed our instructions throughout you will have added a handful or two of blood, fish and bone when you planted your seed potatoes. Repeat this in late July working the blood, fish and bone lightly into the soil with your hands.

GENERAL CARE OF POTATO PLANTS IN CONTAINERS
When you are watering or feeding your potato plants keep an eye out for flowers. Where they appear pinch them off with your fingers. he reason for this is that the flowers will soon "set" and start to produce seed. 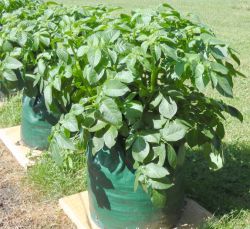 This takes some small amount of energy from the potato plants (not much though) and pinching out the flowers causes all the energy to go into producing tubers.

It is worth mentioning at this point that, yes, potato plants do produce flowers, and sometimes very attractive ones. The flowers are pollinated and then produce berries. True potato seed is created in the berries and if left, they fall to the ground and a small amount of seeds will germinate and produce new potato plants next year.

NEXT STEPS
Having cared for your potato throughout the growing season the last task will be to harvest and store your potatoes. Click that link below or the "NEXT POTATO PAGE" at the bottom of this page.