Raspberries are very expensive to buy in the shops even when they are in season. A few raspberry canes grown in containers will give you a reasonable crop for very little outlay.

With good care the plants should last five or six years. Raspberries are very easy to care for and suffer from few problems.

See the notes further down this page for each of the dates mentioned below because they will vary depending on the climate in your area. The dates in the table below are good for average areas in the UK.

The two types above require pruning at different times of the year so it's best to plant one type only in a container.

RECOMMENDED VARIETIES OF RASPBERRIES FOR CONTAINERS

All varieties of raspberries are suitable for container growing but it's best to avoid tall growing varieties. These will be more adversely affected by strong winds when grown in the light soil of a container.

SUMMER FRUITING RASPBERRY VARIETIES FOR CONTAINERS
Glen Ample
A strong growing raspberry which produces larger than normal fruits. The raspberries are ready for eating from early July through to August. Good disease resistance. The canes are free from spines and they grow very upright reducing the need for support. Awarded an AGM and one of the most popular varieties.

Malling Jewel
Probably the best summer fruiting raspberry for containers because they have low growing and very sturdy canes. The fruit is a typical raspberry red colour and they are exceptionally tasty. Awarded an AGM, this is our choice for containers.

AUTUMN FRUITING RASPBERRY VARIETIES FOR CONTAINERS
Autumn Bliss
This is our choice of the autumn fruiting raspberries for containers. Raspberries are produced from mid August until early October. The canes are short and sturdy requiring almost no support in a container. Good disease resistance, especially as far as aphids are concerned. The fruits are slightly larger than normal.

WHEN TO PLANT RASPBERRIES IN CONTAINERS

The timing for planting raspberries in containers is the same as for planting in the open ground. The best time is from November to early March. 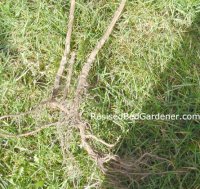 HOW TO PLANT RASPBERRY CANES

One or two raspberry canes can be planted in a container which is 45cm / 18in or more wide. Dig out a hole wide enough to take the roots spread out slightly. The depth is important, they should be planted to the same depth as they were grown. You will be able to see a soil mark near the base of the cane, plant them to that depth.

Firm the soil around the planted raspberry cane. Support can be a single bamboo cane or three pointing inwards and joined with string at the top. As the raspberry plants grow, tie them loosely to the canes to provide some support. Summer fruiting raspberries need more support compared to autumn fruiting ones. Water the container well. 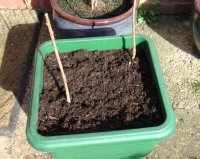 CARE OF RASPBERRIES IN CONTAINERS

To help with water retention apply a mulch of stones, chipped bark or similar to a depth of 5cm / 2in, it dramatically reduces water evaporation.

Feeding raspberries is best done with both a long lasting fertiliser such as blood, fish and bone or bonemeal and top that up with a monthly liquid feed of a general-purpose feed.

Sprinkle a handful of long lasting fertiliser on the surface of the soil in March and June. Gently work the fertiliser into the top 2cm / 1in of the soil with a trowel and then water. The general purpose liquid fertiliser should be applied monthly at the concentration specified on the pack.

Raspberry plants are frequently strong growers and after a year or two growing in a container they will start to produce more than one stem. This can result in the container becoming overcrowded and you need to keep an eye on the situation. If the raspberries are autumn fruiting and multiple stems appear (keep the number of stems to two per 45cm / 18in pot) then select the strongest growing and cut the remainder back to ground level. check your plants once a month from April onwards for multiple stems and cut bck unwanted ones.

Preventing summer fruiting raspberries from over-crowding the container is a little more complicated. Bear in mind with summer fruiting raspberries that they produce fruit on canes which started growing last year. So in the summer when last year's cane is starting to produce fruit you will also need to have one or two more canes which are growing for fruit production next year.

Pruning aside (see below) that's all the care that your raspberry plants will need. The containers do of course need to kept weed free. Position your container in full sun or part shade. If your area is windy then position the container where the plants will be protected from the worst of the wind damage.

If you have autumn fruiting raspberry canes then pruning is simply cutting the canes back to 3cm / 1in above soil level in mid-February. It sounds harsh but this will encourage them to spring back to life in mid-March for another year's crop of delicious raspberries!

Raspberries are best harvested when they are dry and the best time of day is either in the morning or evening when the temperatures are cool. This will help them last longer stored in the fridge.

To freeze raspberries lay them out one a shallow tray (in one layer only) and let them freeze. If you are lucky enough to have lots then bag up the frozen raspberries, place them back in the freezer and start freezing the next batch in the same way.

Bagged up, they will keep in the freezer for at least three months. When you defrost raspberries they will never have the texture of fresh raspberries but that's not a problem if you want to use them in cakes, sauces or drinks.

One tip for making frozen raspberries look good is to remove them from the freezer only a few minutes before you need them. They will stay in shape for a couple of hours and initially will have a delightful sugar-frosted look - see the picture of the Chocolate and raspberry cheesecake below.

Good recipes for raspberries (frozen and unfrozen) can be found at the following links: 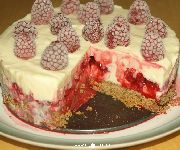 Raspberries grown in containers suffer from the normal pests and diseases which affect those grown in the open ground. Rather than detail them here we provide a link here to a good page that deals with how to identify them and how to treat them.


READER COMMENTS AND QUESTIONS ABOUT THIS PAGE

From: Mike
Excellent Info, I am just about to plant up my raspberrries in large 70ltr very deep containers using 70% General Purpose Peat basedCompost with added JInnes plus 20% addtiional JH No3 and 10% Perlite, and a P{H of 6 With 2" of Pine bark chips as Mulch. I will post how well it turns out.
From: Sharon
Very helpful information
From: Shyam Sharma
I am first time planter and needed this info. Thanks.
From: Sharon
I have avoided planting raspberries in my garden because they grow much TOO well in our climate and can become a nuisance. Someone suggested containers for raspberries... and it sounds like a really good idea. I have two questions though. First, can the pot take some freezing with the roots above ground in the container or would it be better to heel it in for the winter? Second is approximately how much fruit will one pot with two canes in it produce? I'm thinking not really very much and 3 or 4 pots would be a good amount for two people. We would probably like to eat them fresh while they are producing well and freeze them when there are too many to eat.

ANSWER: I live in the Midlands and they overwinter in containers just fine. I do move them close up against a hedge out of the wind during winter, against a house wall would do even better. In my experience they produce just as much fruit as canes planted in the ground. Four pots should keep you handsomely in raspberries! Three pots would be my guess but it depends how many you can eat. Remember, you will crop more in year two compared to the first year.
From: Shyam Sharma
Very good info for a first time grower as myself.
From: Barbara
Very very helpful. All the info I needed in one place!
From: Mel
Clear, detailed and informative.
From: Sue
Very helpful
From: Grace
Helpful, all the info I need to get started!
From: Not Given
Planted my first one! :)
From: Not Given
Just what I was looking for.
From: Pat
Great information!