How to Divide Heucheras

Article by David Marks
Twenty years ago heucheras (also known as Coral Bells) were grown principally for their wispy flowers which grow on long stalks held high above their foliage. Recently, plant breeders have twisted the emphasis around to the foliage. They come in all shapes, sizes and colours now and provide interest over a much longer period.

Once established, and that takes only six months, Heucheras will grow in a large variety of positions and almost all soil types. Vine weevil apart, they are very healthy plants and will look after themselves if you give them a once a year 10 minute clean up in spring. 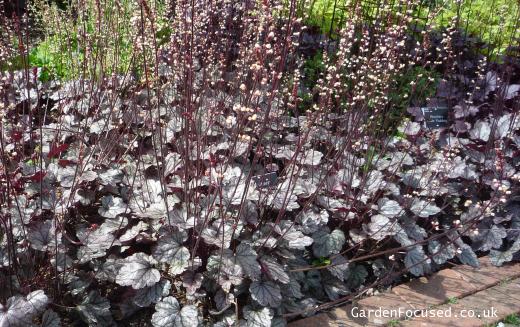 Their one downside is that after three or four years they will almost certainly start to look a bit bedraggled as their stems turn woody and spread over the soil surface. But see later down this article to learn how to reinvigorate the plants and very easily take cuttings.

Heucherellas are a cross between a Heuchera and the closely related Tiarella. The plant breeders have created a plant which can be treated exactly as a Heuchera but the range of colours and leaf shapes has been increased enormously. Heucheras are native to North America

Use the checklist below to decide if Heucheras are suited to your preferences and garden conditions:

WHERE TO BUY HEUCHERA / HEUCHERELLA


Heucheras and heucherellas are widely available at garden centres in the UK but the widest range is to be found online.

An obvious choice for buying Heucheras and Heucherellas is Heucheraholics although we have no personal experience of buying online from this company.

HOW AND WHEN TO PLANT HEUCHERAS


Planting from pots is the most reliable method as described below


Because Heucheras have undergone a very significant breeding program over the last 15 to 20 years, many, many more varieties are now available. The RHS trials of Heucheras held in 1999 to 2001 is now hopelessly out of date and the Award of Garden Merit (AGM) only includes varieties which were available in 1998 when planning for the trials commenced.

As far as general health is concerned there is very little difference between Heuchera varieties. There are however significant differences in foliage shape and colour, how well foliage performs in winter, flowering abilities, how well the variety performs in shade or full sun.

Read descriptions on the internet or plant labels in the garden centre and make your choice based on where in your garden you want a heuchera to grow and what specific features you require. On another page of this article (click here to go there now) we list many of the commonly available varieties along with their key characteristics.


The key care tasks for heucheras are listed below. More information about each care item can be found below the list.

Most heucheras produce flowers, typically beginning in late spring or early summer. To help prolong the flowering period, snip off the flower stems just below foliage level when the flowers die.

This will also prevent the dead flowers and stalks falling into the plant which would reduce air circulation leading to fungal diseases.

Heucheras are not heavy feeders and need little fertiliser to grow well. The combination of mulching and a handful of fish, blood and bone in spring will provide them with all the nutrients they need.

Avoid feeding them with nitrogen rich fertilisers such as Growmore or other general fertilisers. This will simply encourage fleshy foliage which is prone to rotting.

Spring is the best time to refresh your heuchera. Remove and dead or damaged leaves from the foliage.

Separate the foliage carefully with your fingers to look for any woody stems. Often these will be longer than recent growth and will have little new growth along them. Cut these out with a pair of sharp secateurs.

At the same time check that temperature changes haven't caused the plant to lift out of the soil. If this has occurred, fill in any gaps with crumbly soil or dig up the plant and replant at the correct depth.

Applying a mulch in spring will help conserve moisture throughout the dry summer months. It will also provide a low level of nutrients as the mulch decays. The best mulch is well rotted organic matter, your compost heap is a good source of this.

During freezing weather in winter, heucheras can sometimes lift out of the soil leaving gaps around the shallow roots. A spring mulch will not only help to prevent this but it will fill in any gaps around the crown. Do not mulch the centre of the plant, this could cause the crown to rot.

HOW TO DIVIDE HEUCHERAS


After about three years, certainly after four years, your heuchera will begin to look bedraggled and the foliage will no longer be standing proud and upright. That is the time to divide it and grow as many new plants as you require. Late May to early July are good times to do this because the new plantlets will root quickly.

Lift up the foliage and you will see that stems are lying horizontal along the ground. You can easily pull these stems away from the plant. What you then have is the horizontal stem which is not rooted and at the far end of it will be foliage which has turned upwards.

Remove all the stems which are not growing in tufts. You will then be able pull off tufts of stems at the point they join the main horizontal stem. Each stem will likely provide you with four or five healthy plantlets ready to be planted in a pot of multi-purpose compost.

Remove any dead or unhealthy leaves from the plantlet so that you end of with a small stem that has four or five good quality leaves. The smaller leaves are the best ones because they are less likely to be infected with rust or other diseases.

Fill a small pot with good quality multi-purpose compost, make a small hole in the surface and insert the plantlet so that the crown (the point of the stem where the leaves are growing from) is level with surface of soil and firm it in well.

Water well and place the plants in a shaded position out of the wind for six weeks until the plant has rooted. It can then be planted in the ground or or in its final pot. Make sure it is kept moist at this early stage of its life.


Heucheras grow very well in containers (ensure they have drain holes) and as far as care goes they can be treated as described above. The main concern will be keeping the soil moist. Be sure to water well in summer months but at the same time don't let autumn and winter rain water log the plants. Keeping the pot on stands a couple of centimeters high will help greatly.

A mulch in spring is also essential although don't cover the crown of the plant. A mulch will provide low level nutrients and reduce the need for watering considerably.

A 30 cm wide pot is about the smallest possible but 50cm is probably better. The roots of heucheras are very shallow so pot depth is not crucial. But deep pots are less likely to dry out and they will reduce the need for watering.

If you are going away for a summer holiday, move the container to a shady position if possible and then move it back when you return. A couple of weeks in the shade will do no damage but will significantly reduce the need for water.

PESTS AND DISEASES OF HEUCHERAS


The two main problems with heucheras are rust and vine weevils.

The first symptoms of vine weevils are little notches in the edge of the leaves caused by the vine weevil eating them at night. The second symptom is a plant which appears to be failing through lack of water. In fact the vine weevil grubs have eaten most of the roots by the time you notice the problem

We have created a detailed page on vine weevil identification, treatment and their life cycle. It can be found here.

Heuchera Rust can be identified by small rust coloured raised areas on the underside of leaves. We have written a special page about this increasingly common problem. It will help you positively identify it and describe the various treatment options available. The page can be found here.

Below we list the key strengths and weaknesses of Heucheras.

There are literally hundreds of varieties of heucheras, our picture gallery shows some of the ones we recommend. Click here to see the heuchera picture gallery.