By David Marks
"Pinching out" is really just a fancy name for pruning fuchsias when the stems are young and thin. It's called pinching out because it can be done with your fingernails. The process starts with young plug plants bought online  / garden centres or those you have grown from cuttings.

To pinch out simply cut away the growing tips of stems. Two finger nails or a small sharp knife is the only equipment needed.

WHY PINCH OUT FUCHSIAS


Most varieties of fuchsia, if left to their own devices, tend to sprawl with long stems. As the stems grow longer the number of leaf nodes also decrease in frequency. Flowers (and more leaf stems) are formed at leaf nodes, two per node, see the picture below. 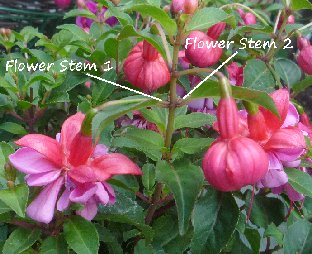 Correct pinching out maximises the number and spread of flowers and at the same time encourages the plants to grow into a bushy shape.

WHEN AND HOW TO PINCH OUT FUCHSIAS

If you have taken cuttings or bought plug plants then the first time you pinch out should occur when the plant has a two or three stems which each have three or four sets of leaves. If you are following our fuchsia calendar, which is adjustable to your weather conditions, then this should occur in the fourth week of March.

Using your finger nails or a sharp knife pinch or cut out the growing tip of the stem so that two sets of leaves remain below it, see the pictures below.

Stem of a fuchsia before pinching out. 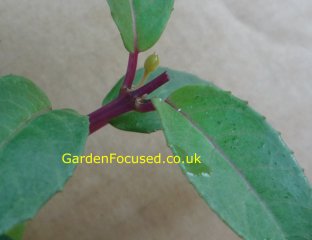 Stem of a fuchsia after pinching out.

Pinching out the growing tip will force the plant to put more effort into growing the two side shoots from the set of leaves just below where you pinched out. So now you will have two stems growing at full steam in place of just one which will result in a much bushier plant and one with more flowers.

Our calendar recommends that you pinch out two further times during the season, the first during the fourth week of April and the final one during the third week of May. If you stick to those dates you can expect have a nicely formed, bushy plant with plenty of flowers in the first week of July.

The downside to pinching out fuchsias is that it delays flowering on pinched out stems by six to eight weeks so if you want your plants to come into flower at a particular time bear that in mind.