HOW TO TAKE FUCHSIA CUTTINGS IN THE UK

By David Marks
Fuchsias are very exotic looking plants and at first glance it may appear that taking cuttings would be a hit and miss affair but nothing could be further from the truth. Even the most amateur gardener can successfully grow six or more new plants from one original.

Another benefit is that each cutting will be an exact replica of the parent plant. Give it a try with our step by step instructions to fuchsia cuttings and helpful photographs.


The equipment needed for your cuttings is minimal and we list each item below:


To take fuchsia cuttings in spring you need a healthy "mother" plant(s) and it needs to be of a certain size to allow at least two or more cuttings to be taken. If you have managed to overwinter your fuchsias then there will be no problem but if you have not, then you will need to buy a mother plant and take cuttings from that. Buy your mother plants as early in the year as possible to allow them time to increase in size and give you four or five cuttings from each.

Unusually in the gardening world it's probably best to buy your "mother" plants from a garden centre rather than online if you want them as early in the year as possible (although read the rest of this section for more specific information). The reason for this is that the majority of online suppliers only start sending out their stock of fuchsias in mid to late March because they cannot rely on the temperature being high enough in the postal system for the plants to survive the delivery time of two to three days. However, deliveries to garden centres are in controlled temperatures and they tend to have fuchsia plants for sale in early to mid March, occasionally late February.

That difference of two to three weeks is not crucial at all if you are simply interested in a few plants to grow on but if you want to use the plants to take cuttings from then it does give you two to three weeks head start. The remainder of this article assumes that you buy your "mother" plant(s) in the first week of March. You may need to adjust the dates a week or so back or forwards depending on when you buy the plant.

As soon as you have the "mother" plant(s) put then in a slightly larger pot with new general purpose compost. If they are plug plants put them into 8cm / 3in pots. Let them grow on for three weeks and take your first cuttings in The fourth week of March.

Follow our easy eight steps, with pictures, as listed below:


Fuchsias normally produce two leaves at each node but occasionally they produce three leaves as shown in the picture below. 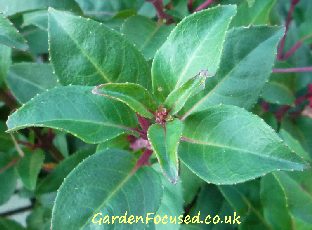 Many experts in the fuchsia world believe that a cutting taken from a three leaf node produces a bushier plant compared to a normal two leaf cutting. It does sound a reasonable proposition but no comparisons are available to prove the point. We suspect that far more important to a bushy plant is the way the plant is pinched out throughout its life.

HOW TO OVER-WINTER FUCHSIAS


Our experience of over-wintering fuchsias is that it is difficult to do without a greenhouse.  The reason for the difficulty is that they need to kept at a constant low temperature for several months over winter. They also need the compost to be kept slightly dry without drying out completely.

The other problem will be pest and / or disease. Fungal infections and pests (primarily red spider mite and vine weevils) occur all too often.

However, if you do wish to give it a try we recommend you read the article we have written (click here).