FUCHSIA CARE IN THE UK

By David Marks
Fuchsias have three key needs if they are to be healthy and produce lots of flowers, each one is described in detail in this article:

PINCHING OUT BUSH AND TRAILING FUCHSIAS


If a fuchsia is left to its own devices it will grow into a long-stemmed plant with no particular shape. It will also produce far less flowers compared to one which has been cared for. Pinching out the growing tips regularly during the initial stage of growth ensures that the stems have lots of side shoots. This will encourage the plant to form a mound shape and the maximum number of flowers.

We have written an in depth article, with several helpful close up pictures, on why, when and how to pinch out fuchsias, which can be found by clicking here.


As any fuchsia grows in a container it will need to be potted up two or three times into a larger container to allow the roots to expand and the plant to reach its maximum potential. In general it will need potting up form its original small pot after about four weeks, then another six weeks later and then into its final pot another six weeks later. You can tell when the plant is ready for potting up by tipping it out of the pot and looking at the root ball, if there are lots of roots at the edges then its time to pot up. When you do this take a good look at the root ball for signs of the dreaded vine weevil!

Fuchsias do not like frost and young plants will be killed if they are exposed to it. The same goes for shop bought fuchsias because they have been grown in temperature controlled conditions. During cold months they need to be kept out of the cold. When warmer weather begins they should be exposed to outside conditions in phases to avoid shocking them. Initially place them outside during the day and gradually increase the period they re outside over a two week period.

Fuchsias do not grow well in dry conditions, they prefer their roots to be in moist but not water-logged compost. The larger the container the less often it will require watering. The basic rule we use for testing if a plant needs watering is to stick a finger in the top 3cm of the soil, if it's dry all the way down then it needs watering.

As far as plant foods for fuchsias are concerned we use liquid feeds at the rate stated on whatever pack we buy. When the plant is growing and has no buds on it we feed with a balanced nitrogen fertiliser. When the flower buds start to appear we swap to a tomato fertiliser.

When the flowers appear they come in flushes, not all at once. As soon as a flower starts to look past its best pinch it off including the seed head behind it. If the seed heads are left on the plant they will sap energy from the plant and also convince the plant that producing more flowers is not needed. Some fuchsias have been bred to drop their flowers and seed heads of their own accord. 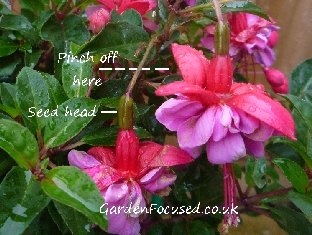 Fuchsias grow best in semi-shade although full sun can be tolerated as long as the compost is kept moist. Full sun will definitely cause the colours in the flowers to prematurely fade.

If you are growing fuchsias from cuttings or plug plants we have created a step by step growing calendar itemising each step in the process. The dates given in the calendar are average for the UK and Ireland but can be very easily auto-adjusted to your particular area, Click here to go to the calendar page.

GO ON TO LEARN ABOUT FUCHSIA PESTS AND DISEASES