Article by David Marks
The Chinese Lantern Plant (Physalis alkekengi) is a hardy, perennial (grows year after year) plant when grown in the UK. The season of interest first occurs when the plant produces light green fruit cases in August. These turn to a very attractive deep orange in September.

The fruit cases remain attractive if left on the plant for three or four weeks but if they are correctly harvested (see below) they can be dried and will then retain their colour and shape for several months.

The name "Chinese Lantern" has been commonly given because the orange pods which encase the fruits look like Chinese Lanterns which are paper cases with small candles in them. Physalis alkekengi is native to Southern Europe, Southern Asia and Japan. The "Physalis" part of the name means bladder.

Tiny uninteresting white flowers are produced in July which then turn into small light green pods. These enlarge and turn orange in September. The pods contain a fruit which contains the seeds. The leaves and young, unripe fruits are poisonous. 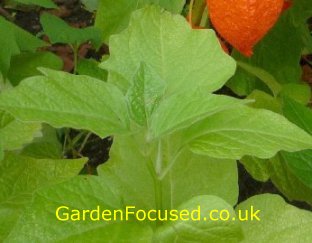 HOW TO PROPAGATE CHINESE LANTERN PLANTS

There are two common methods used to propagate Chinese Lantern Plants, by seed and by root cuttings. Both are very easy to do and the success rate will be very high. Root cuttings are the quickest and easiest but you will need a mother plant for this method. Seeds on the other hand are more readily available but it may be a year before the plants are fully grown.

Although Chinese Lantern plants are fully hardy in the UK when fully established the young seedlings need to be protected from frost initially. The best time to sow the seeds is from February to April. The earlier you sow the seeds the better chance you have that plant will produce lanterns in the same year.

Fill an 8cm / 3in wide plastic pot with general purpose multi-purpose compost and stand it in a shallow bowl of water for half an hour. Sprinkle two or thee seeds on the surface of the compost and cover very finely with a small amount of compost. Place the pots in a position where it gets light (but not direct sunlight) and the temperature is roughly 18-22°C / 65-72°F. The seeds should germinate after 10 to 14 days.

When the seedlings appear the pots can be moved to a cooler position but not exposed to frost. For the next month a position in full sunlight is best.

The plants can then be moved to their final position - a container is recommended because this plant can easily colonise a plant border overcoming less vigorous plants.

When the plants come to life in the spring select a healthy looking sprig which has green growth and gently dig into soil around it. You will see that rather than roots the plant has "runners" just below the soil surface, similar to mint plants. Chop off a decent sized part of a runner (3m / 1in) with greenery growing from it and plant to the same depth in a container filled with multi-purpose soil. Place it in a frost free position out of direct sunlight.

After a month or so the cutting will be growing away strongly and it can be planted in a larger container or in your garden.

They thrive in most soils but of course do best in a well drained but moist soil. When growing them in containers sprinkle a handful of blood, fish and bone fertiliser on the compost surface every month while they are growing. 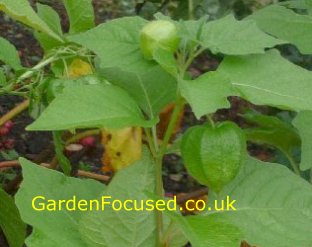 Keep the container watered throughout the year. The lanterns will turn bright orange during September and they can be left on if you want. If you want to preserve them for flower arranging or other decorations simply cut the stems off at ground level and remove the leaves. Hang the stems upside down in dark, cool and dry place such as a garage. They will have dried out after two to three weeks and will then be ready for use as a dried flower arrangement.

The plants grow very quickly when well-established and normally shrug off any attacks by pests. Slugs can sometimes be a problem especially because they can hide under the rather dense foliage. Slug pellets or the normal, more organic solutions, are the only course of action.