Article by David Marks
The frequently given advice concerning bay trees and frost damage is that they will withstand temperatures down to -5°C (23°F) without significant damage. As far as short and sharp advice is concerned that's about correct but it is by no means all the story. We investigate this subject in depth and use our extensive practical experience to suggest some of the methods you can use to protect your bay tree from frost damage.


Bay trees grown in pots are more prone to frost damage compared to ground grown bay trees. The reason is simple, the compost in pots freezes much quicker than the ground. Where a plant is in frozen ground / compost the roots cannot absorb water and the freezing then defrosting process can seriously damage the roots. The following is a list of preventative frost protection measures which you can take, each one is discussed in more detail in the paragraphs below: 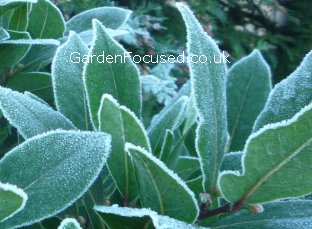 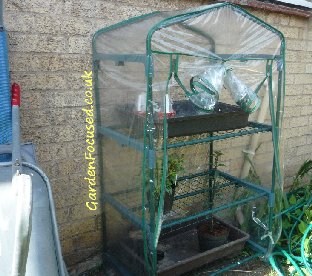 If you use a plastic greenhouse such as this then beware of condensation which quickly forms on the inside when the cover is closed. Preferably open the cover during the day when temperatures are above freezing but at the very least open the covers as soon as the sub-zero temperatures pass.

Placing your bay tree inside when cold weather is likely is the most reliable method of protecting it. An unheated room, in an otherwise heated house, will protect your plant from frost damage in all areas of the UK. A garage is also a good option. Don't worry about the lack of light if the bay tree is kept in the dark, it will easily survive without light for a week, two weeks at a pinch. As soon as conditions permit, move the plant back into natural light conditions.


PLACE OUTSIDE BY A HEATED WALL

By far the most surprising result was the temperature we recorded against the exterior wall of a heated house which received sun for the majority of the day (even though the temperatures were recorded in the shade) which was 6°C above the recorded temperature in the open in a shady area (see picture below). 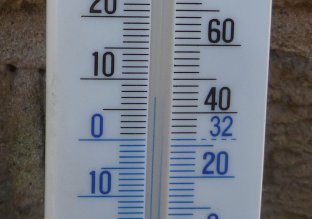 Our advice as far as positioning is concerned can be summarised as follows:

As a general rule, the larger the pot the longer it takes for the rootball to freeze. If you are aware that you are growing a potted bay tree in an area which is liable to very cold conditions then make sure you pot up the plant into a larger pot on a regular basis.

Bay trees do well if the roots are slightly restricted but this may be of secondary concern in comparison with the danger of frost damage. If prevention of frost damage is your main concern we would suggest the following potting up schedule:

WATERING AND FEEDING IN COLD WEATHER


From November to early March a bay tree goes into hibernation. It might not loose its leaves but growth is severely restricted during this period. It requires very little water and even less feed. With this in mind don't water your potted bay tree at all unless very abnormal weather conditions cause the compost to dry out and even then, water sparingly, rain fall will in all probability be more than sufficient. At the same time (the difficult part!) make sure the compost remains moist.

It may be contrary to your first thoughts but compost which has water in it protects the roots of a plant better than a dry compost. Water fills gaps in the compost which effectively insulates the roots slightly from frost.

Another fact to consider about water in compost is that as water freezes it gives off latent heat and that heat maintains the temperature of the freezing (but not frozen) water at exactly 0°C / 32°F - that's a fact of life which never changes. A very good reason to ensure that the compost surrounding your bay tree roots is moist because that moisture will protect the roots from damage for an hour or so. Unfortunately, when the water freezes solid its protection is lost and the temperature will gradually lower to that of the outside air but you have at least gained an hour or so protection.

Ensure that the pot allows water to drain away easily. This can be achieved by:

Don't feed at all during this period. Any plant food will contain some nitrogen, some feeds more than others. Nitrogen encourages most plants to produce new, tender leaves and shoots which are very liable to be damaged in cold weather. Older leaves are far less likely to be damaged by frost.


For many potted plants, bay trees included, frost damage occurs mainly to the roots; the stems and leaves above ground are less likely to be damaged. Even if they are damaged, they are more likely to recover the next year compared to the roots.

To avoid the problems associated with condensation, remove the frost jacket as soon as the very cold weather passes. Failure to do so is likely to cause your bay tree to start rotting.