STRAWBERRY PESTS & DISEASES IN THE UK

By David Marks
Under normal circumstances strawberry plants are relatively free from pests and diseases. The key problems appear to be moulds such as botrytis and powdery mildew closely followed by bird damage. Squirrels and  mice can also be a problem in some areas.

Lots of books and website articles make much of Verticillium Wilt which can affect strawberries and there is no cure. However, amongst amateur gardeners it is not common at all.

Other pages on strawberries are shown below:


STRAWBERRIES HAVE GREY MOULD ON THEM

This can be caused by two diseases, botrytis (Grey Mould) or Powdery Mildew. To distinguish between the two, Powdery Mildew first infects the leaves with a powdery white coating, it can then go on to infect the fruits but it is the leaves which suffer the most. With Botrytis, the infection is first noticed on the fruits and it can then go on to infect the whole plant. The fruits will suffer first and have dark marked areas where the fruit is rotting with more extensive areas of grey powder.

- You will first see a grey mould at the stalk end of some of the strawberries. The infected area will enlarge and a sunken brown or grey area will develop at the centre of the mould. It mainly affects nearly ripe fruit although it can affect green fruits as well. The part of the stalk nearest the strawberry may well also have grey mould on it. The infection will eventually cover the whole of each affected fruit. 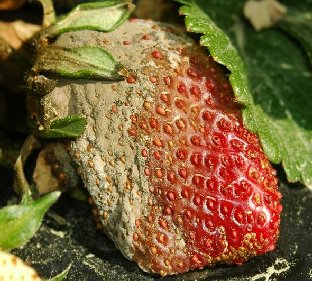 Firstly, it is not safe to eat strawberries that are infected by botrytis /grey mould, it can produce an allergic reaction in a significant number of people.

There are no chemicals available any longer to the amateur gardener for the treatment of grey mould. That leaves you with prevention measures which can avoid the problem in the first place and also prevent it spreading when it does occur, these are:

This is a fungal infection which is caused by Botrytis cinerea. Grey Mould can live in the soil for many years an it can also affect a huge variety of plants including many weeds. It can also be present in plants and weeds which show no symptoms. In reality it's best to assume that the infection is already present just waiting for the correct conditions. Those conditions are a temperature range of 18°C to 24°C (65°F / 75°F) alongside moist conditions caused by rain or manual watering. Under those conditions spores will form and spread the infection.

The real damage is done when the spores enter the flowers which then turn into fruits and the fruits become infected starting at the stalk end.

- Powdery mildew is easy to identify as a white powder which first appears in spring on young emerging leaves. It looks almost like a fine coating of talcum powder. If left untreated it will affect more and more leaves, sometimes fruit ..... Read our article on Powdery Mildew for full details on how to recognise and treat this disease in strawberries.

Birds love strawberries and not only fully ripe ones! The minute your strawberries begin to colour up even slightly birds can be a major problem. Even if the damage is minor, who wants to eat a strawberry that has been pecked at by a bird, not me!

Physical barriers such as netting or a fruit cage are the only answer to this problem. There are many bird-scaring products on the market but their effect is minimal if any at all. There are many ingenious cheap solutions to the netting option, one particularly good one appears to be net curtains.

FLOWERS APPEAR BUT NO STRAWBERRIES ARE PRODUCED

If your strawberry plants are flowering but there are no signs at all of fruit developing the problem can have one of two causes:

This is a condition rather than a pest or disease. It's caused by late frost which occurs when the flowers are fully open. The frost damages some parts of the flower preventing the formation of fruit. It can be recognised because the centre of the flower is black, all, some or only a few flowers may be affected depending on your local conditions. There is no cure and prevention consists of not planting strawberries in cold and exposed positions. Covering with horticultural fleece can also protect the plants from some of the frost damage.

OUTER LEAVES OF STRAWBERRY PLANTS ARE BROWN AND WILTED


This can be caused by the disease Verticillium Wilt. The outer leaves suffer first, turning brown and wilting, then the entire plant becomes stunted, wilts and will eventually die. It is caused by a fungus in the soil. It affects a large number of plants but for vegetable gardeners the key plants are potatoes, tomatoes, peppers and strawberries.

FIND OUT MORE ABOUT STRAWBERRIES BELOW