HOW TO CARE FOR
RASPBERRIES

By David Marks
Once they are planted, raspberries are low maintenance fruits but they do require attention a few times during each season. Pruning is required once a year at different times for autumn and summer fruiting raspberries.

Raspberries are water hungry plants so mulching at the beginning of each season is advised. In dry weather they will require watering especially when the fruits are forming. Feeding is also needed.

Summer fruiting raspberries will need to be tied into supports during the year.

However, for the healthiest raspberry plants keep the water supply constant at all times of the year including non-fruit producing times. From mid-autumn to mid-spring natural rainfall should be sufficient by itself.

With water increasingly becoming a valuable and costly resource, mulching is an increasingly rewarding gardening activity. It reduces water loss from the ground considerably and also provides a small but constant supply of nutrients.

Mulching of the soil around raspberries will reduce the need for watering. Simply lay well-rotted organic matter on the soil around but not touching the stems. A depth of 10cm / 4in would be ideal but any depth of mulch will be beneficial. The best time to do this is in the third week of March (average for the UK) just after feeding the plants (see three paragraphs below).

Personally I would avoid putting mulch on clay soils when growing raspberries. Clay retains moisture and can become waterlogged if mulch is applied.

If well-rotted organic material is in short supply grass cuttings will do a good job. Previously it was thought that as grass rotted down it would leach the soil of nitrogen. Recent, rather more scientific tests, have now proved that this is not the case. The reduction in nitrogen is very small indeed and the benefits of mulching far outweigh any loss.

In very hot spells even mulching will not be sufficient and then a weekly watering will be necessary to get the best fruits from your raspberries. The rule with watering is to provide lots of water but at infrequent intervals. A thorough weekly watering during very warm weather should be enough for almost all conditions in the UK.

HOW TO PRUNE RASPBERRY CANES

First, the easier to prune are autumn fruiting raspberry canes (these are sometimes referred to primocanes). The canes are fully dormant in midwinter and this is the time to prune them. Using a sharp set of secateurs cut all the canes to a height of 15cm / 6in and the job is done! Some recommend pruning the canes back to ground level but leaving a 15cm stem allows you to see exactly where your raspberry canes are and it's then easy to avoid trampling them when they start to grow again in spring.

Summer fruiting raspberries (these are sometimes referred to as floricanes) should be pruned soon after they have finished producing fruits. In your area this will be approximately the third week of August. To understand how to prune summer-fruiting raspberries it's best to know that they are really biennials - in other words they grow in the first year and produce fruit in the second year. 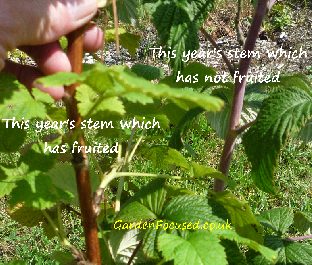 When you have finished pruning you will end up with a pile of canes which are very useful for supporting dwarf French beans. Just stack the canes in a dryish part of the garden and use them next year. As the raspberry canes grow throughout the year, summer fruiting types should be tied in to supports at least twice depending on how high your variety of raspberry bushes grow.

Trial and error is the best way to find out when raspberries are ready for harvest. Colour of the berries cannot be used as an overall guide because different varieties have different coloured berries. When you pick a raspberry, it's ripe if the berry comes off easily and the white central core remains on the bush. If the berry squashes when you pull it off then it's probably over-ripe.

It's a temptation when harvesting raspberries to pile them high into containers. Don't do this because the raspberries at the bottom of the container will be crushed by the weight of the top raspberries. Try to harvest your raspberries when they are dry, wet raspberries deteriorate quicker than dry ones.  Layer them two, at most three, deep in shallow containers, store them in shade whilst harvesting and get them into the fridge as soon as possible. A ripe raspberry will last two, possibly three days in the fridge before it starts to deteriorate significantly.

Frozen raspberries will last three or four months in the average freezer. The freezing process does damage the texture of raspberries so frozen raspberries are ideal for jam, fruit drinks and flavouring. Frozen raspberries can be defrosted in the fridge and used as a topping for morning cereals (our favourite) and also to be added to plain yogurt to give a fruity taste.

HOW TO PROPAGATE RASPBERRIES

Raspberries are easier to propagate than many think. Indeed, if left to their own devices they can quickly overrun large areas of a garden. Raspberries produce underground suckers which spring up anything up to a metre / yard from the parent plant. Simply dig up a healthy growing sucker with the roots as complete as possible and plant as if they were a shop bought plant (click here for detailed planting advice).

The best time to propagate raspberries is December time but in reality these plants are so strong growing that they can be planted at any time of the year as long as they are initially supplied with lots of water.