QUINCE TREES FOR THE UK GARDENER

Article by David Marks
Quince trees originate from Iran and Turkestan and although they need warmth and sun to fully ripen, many varieties also grow best in moist ground.

In the UK they are best left to ripen until early October for their flavour, and more particularly aroma, to develop fully. First frosts are the limiting factor, so we would recommend that they are not grown in cooler areas. In general the South and Midlands will have a satisfactory climate but they will struggle to develop fruit fully in cooler Northern areas.


Here's a bullet point summary, in no particular order, of the reasons for growing a quince tree:


If you grow a quince tree on its own roots it will grow to about 5m / 16ft tall and about the same width. This is too large for most gardens and makes picking the fruit difficult. To curb the size of a fully grown quince tree they are most commonly grown on Quince A or C rootstocks. Quince C rootstock will give you the smallest tree but they have difficulty in growing in poor soils.

For most gardens Quince A rootstock is probably the wisest choice. Left unpruned the trees will grow to about 3m / 10ft high after 15 years or so. They can easily be pruned to keep them to a height of 2m / 7ft.

HOW TO GROW AND CARE FOR QUINCE TREES

They don't need pruning each year although it's fine to do that if you want to keep them in shape. When you do prune them remove any crossing branches and also any damaged or diseased ones. Prune when they are dormant in mid-winter. 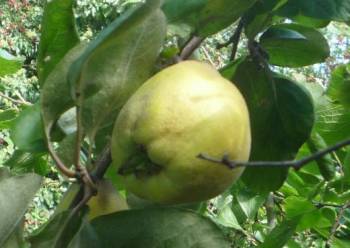 Close up of Quince fruit

Many Quince varieties are self-fertile (i.e. will produce fruit as a single tree) and one tree will quite happily produce fruit on its own. Fruit will be produced on three to four year old trees and and cropping will be at its maximum on a five to six year old tree. All quince trees are deciduous (loose their leaves in winter).

They grow best in full sunshine. Most of the commonly available varieties prefer a moist soil which is well drained and they do better than most other fruit trees in ground which is damp. A mulch in spring time each year will greatly help to retain moisture in the surrounding ground. 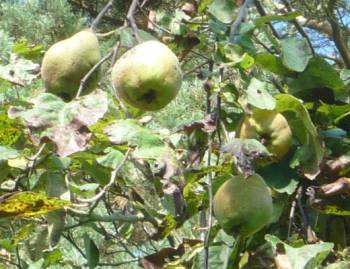 HOW TO HARVEST AND RIPEN QUINCE

In all but the warmest parts of the UK quince fruits need to be cooked before eating. They are best left on the tree until just before the first frosts of the season, October time is normally about right for harvesting.

Many gardeners leave the fruit to fall from the tree, only harvesting them direct from the tree if an earlier frost threatens. This allows the fruit to ripen naturally but they can easily be bruised when they fall which damages the fruits.

Harvest the fruit and store carefully (to avoid bruising) in a cool area for three to four weeks before using them. This can be light or dark, it makes no difference to the ripening process.


One of the best varieties for the UK climate and well suited to moist and dry soils. The pink blossoms are produced freely in April / May time and are particularly attractive. The fruits are slightly larger than average and have a good flavour somewhere between mild lemon and pineapple. The skin has a definite "fur" to it. This variety is self-fertile and will produce fruit as a stand alone tree. 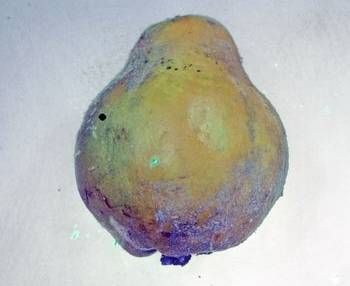 We recommend buying this variety on Quince A rootstock.

It is included here because it has the best flavour of all the quinces for jams, marmalades and jellies. This variety is not however as hardy as most other varieties and only grows well in the warmest parts of the UK. They tend to crop earlier in the season, mid to late September. Portugal quince trees are known to take a couple of years longer to begin producing fruit and miss fruiting in some years.

Grow in a protected position because the tree itself is vulnerable to frost damage. It also grows more strongly than other varieties in the correct conditions and will therefore need regular pruning if space is at a premium. Portugal is only partially self-fertile and will definitely produce more fruit if there is a nearby pollination partner.

This is the most common problem with quince trees and is called leaf scab (Diplocarpon mespili). It is a fungal infection which causes lots of small brown areas on the leaves, these may join together to form larger brown areas. In some cases the fruits are also marked in a similar way. 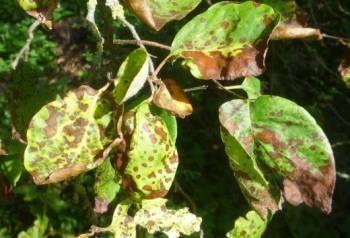 All the chemical sprays previously available for this fungal infection are now withdrawn in the UK. The best course of action is to pick up and burn all fallen leaves in October / November. The fungus over winters on fallen leaf debris. It also thrives in damp summers so may not always be as much of of a problem in dry years.

If you take the action above, a healthy Quince tree affected by leaf scab will still produce a good amount of fruit.

The signs of Brown Rot are:

The sooner you take action the better chance you have of minimising the damage. See here for more specific details about brown rot of plum trees which is the same for quince trees.