This article is specific to woolly aphids which attack apple trees however the very same pests also attack pyracantha, beech and cotoneaster. Identification and treatment is broadly the same.

Woolly aphids are small bugs which attack the bark (not the leaves) of apple trees by sucking the sap from stems, branches and even the main trunk. If left untreated they then progress to the roots of the trees. They weaken a tree's vigour and leave it open to attacks by other pests and diseases, canker in particular. They are a serious threat to apple trees and early identification is essential if they are to be treated with any degree of success.

Woolly Aphids are very easily identified because they have two unusual characteristics. Firstly the white fluffy coating they cover themselves with is very obvious and unusual. Secondly they attack the bark of a tree and not the leaves.

If you take a small twig and scrape off the fluffy coating, underneath you will see the tiny bugs feeding on the sap of the tree. They are brownish and elongated. The fluffy material will start appear in small amounts in spring and become larger as the year progresses - it is not present in winter when the bugs are inactive. 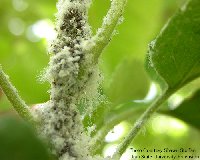 The fluffy material ranges in colour from white to dark grey. If it is dark in colour then you probably have a secondary infection from some other bug at the same time.

If woolly aphids are allowed to progress untreated it will attack the roots at some stage although only digging up the soil around the roots will allow you to see them here.

When the aphids feed on the sap they also release chemicals into the bark and flesh of the tree which results in bumps which can be seen on the surface of the bark. This is the tree trying to cover up and protect the damaged area. These lumps can be damaged by frost in winter and split open making them a primary site for canker to enter the tree in the next spring.

Transmission of the disease from one tree to another is primarily by the aphid when it is able to fly - July and August is is the prime time of year for this.

MID SUMMER
The aphids are able to fly at this time of year and they search out other apple trees and plants to start a new infection site.

AUTUMN WINTER
Woolly Aphids overwinter in cracks and crevices on the bark of apple trees. They can also overwinter on the roots underground of affected trees.

SPRING TO SUMMER
Young woolly aphids begin to feed on the sap of the tree and reproduce at an alarmingly quick rate. They weave a woolly fluff around infected areas to protect themselves from birds and other predators. Initially they attack older stems but as the year progresses they move onto new shoots. Infected areas of the bark grow nodules and bumps to protect themselves.

The attack becomes more apparent throughout the year reaching a peak in mid summer time.


Attacks on the bark leave the tree weakened and open to infestation by other bugs and diseases. The bumps on the bark can often be opened by frost in cold periods making the tree very vulnerable to attack by canker the following year.


There are two main actions you can take to reduce the likelihood of a woolly aphid attack. The first is to buy apple trees on rootstocks which are resistant to woolly aphid attack. The most resistant, commonly available rootstock is MM106. The second preventative measure is correct pruning methods and avoiding damage to the bark of your trees. Bad pruning techniques and damage to the bark of a tree provide ideal sites for infection by woolly aphids.

TREATING AND GETTING RID OF WOOLLY APHIDS


There are chemical pesticides for treating woolly aphids and in general they work well. The rules and regulations concerning chemicals for the amateur gardener change constantly so we won't recommend a specific pesticide here but enter "pesticide for woolly aphids" in your web browser and several results will come up. A word of warning though, follow the instructions carefully and don't spray chemical treatments for woolly aphids outside of the recommended times, some of the chemicals can cause significant damage to helpful predators.

Organic methods also work well as long as the infection is predominantly above ground. To increase your chances of organic methods working, early identification of the pest in spring is vital. As soon as the woolly aphids are indentified spray them with a strong jet of water from a hosepipe or similar. this will remove a large number of them.

Remove any remaining by using a small brush and some soapy water. Keep an eye on infected trees throughout the year and repeat the treatment whenever you see any more fluffy areas reappear. If any stems or branches are particularly badly infected then prune them out.