The name Winter Moth can be slightly misleading for gardeners because it's at the caterpillar stage that this pest does all the damage. It affects apple, plum, cherry and pear fruit trees, and also attacks roses, sorbus, oaks, sycamore and other ornamental trees.

During the young stage of its life in mid March to mid-May the major damage will be to fruit and foliage buds. As the leaves emerge in April to June the larger caterpillars will start to munch on fully formed leaves as well leaving holes in them.


LIFECYCLE OF THE WINTER MOTH PEST

Male and female winter moths emerge from the soil in their adult form (as moths) from early November and through to mid January in warmer winters. The female pests cannot fly and immediately make their way to the nearest tree trunk of suitable tree varieties. It is thought that the females recognise tree trunks because of their profile in low light. They then crawl up the tree trunk into branches. Along the way they mate with male winter moths which can fly very well.

Eggs are laid in the crevices of the bark on the trunk and branches. The eggs are light green at first and laid in clusters of 30 or so. The adult moths have then completed their useful life so die. As the larvae grow in the egg case they turn orange at first and finally very dark brown / blue just before hatching.

One of the key factors which determines when the eggs will hatch is temperature - a week or so with temperatures around 13°C / 56°F is just right for them. Unfortunately this almost always coincides with the period when affected trees and shrubs in your garden are beginning to produce flower and leaf buds. The tiny caterpillars then search out the forming buds and "worm" their way into the outer scales and begin eating their way inwards.

To increase their chances of finding tasty buds and also to enable them to spread to nearby trees some of the caterpillars will spin a thin thread and hang downwards from the thread. Some will latch onto buds lower down the tree but others will be blown away in strong winds and hopefully land on another tree and then attack that. 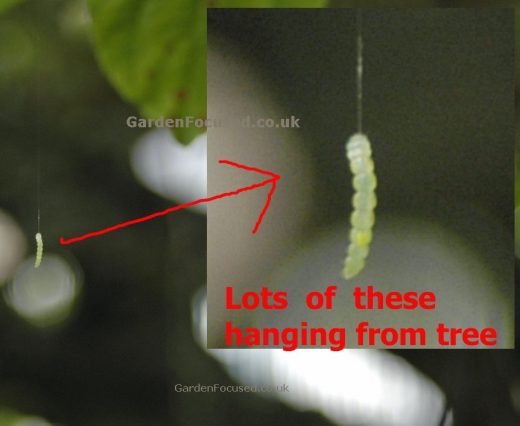 The above picture (courtesy of one of our readers, Tony R) shows this stage of their life cycle.

The caterpillar will eat the interior of a bud, destroying it completely. They then move onto other buds and developing leaves. Many of the leaves will end up with holes in them. 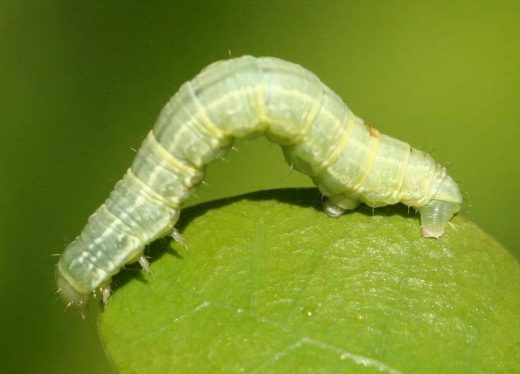 The above picture shows a fully developed Winter Moth caterpillar and is very typical of how they look as they move with an arched back to almost push themselves along. At their longest they are about 2.5cm / 1in long. In early to mid June they drop to the ground and pupate, emerging as adult moths in November.


Well established and healthy trees are very often quite capable of growing through the damage caused by winter moths, producing a reasonable amount of apple / pear / plum or cherry fruits. Just because the moths have attacked the tree one year does not mean they will be attacked the next year. So in many cases it is possible just to ignore the damage.

For some trees however, especially younger trees and those not in the best of health, the damage can be severe, even fatal.

There are two stages in the life cycle of Winter moths when they are vulnerable. The first occurs when they emerge in November and the females attempt to climb up the tree. Almost all garden centres and also online suppliers sell grease bands which can be wrapped around the lower part of the tree trunk in early to mid October. These are very sticky and the females get suck on them and die. Probably the best form of this barrier is a glue one which is painted on the trunk in place of the bands. Both must be kept sticky from late October through to late March.

One word of advice if your trees are staked. To the eyes of a moth, a tree trunk and a tree stake look much the same and they will crawl up both often crossing from one to the other. Grease bands and / or glue therefore need to be applied to the tree stakes as well as the trunks for best control.

In conjunction with this, attracting birds will greatly help. Tits especially love to eat these bugs and encouraging them into your garden with the correct bird food will reduce the moth numbers significantly.

The second stage of their development which makes them vulnerable is when the eggs hatch in late March to late April. At this stage the tree can be sprayed with a pesticide that will kill the caterpillars, many will also kill aphids as an added bonus. Read the labels carefully and follow the instructions in detail. Spraying when the tree has blossom on it is not a good idea because this may well kill pollinating insects - so read the instructions on the pack carefully. Pesticides which contain deltramethrin or pyrethrum are currently the ones to look for.

One other general approach which will reduce numbers is to cover around the base of the tree with a layer of black plastic. This will have two effects, firstly it will prevent the caterpillars from hiding in the ground when they drop to the floor and secondly it will prevent many of them emerging successfully in November.