How to identify vine weevil

How to treat vine weevil

By David Marks
The Vine Weevil is native to Northern Europe but was seen in North America as early as 1835 so it has now spread around many parts of the world. It has a few weaknesses in its lifecycle (see below) and the recent popularity of growing plants in pots has enabled it to flourish. 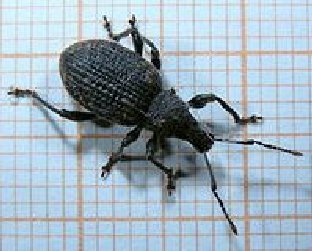 The damage done by the grub stage of this pest is devastating, only two or three in a pot left to their own devices can easily kill many plants. Eggs are laid by adult beetles at the rate of 300 per adult in a year.


The damage caused by the adult beetles and the young grubs is very different. The adults feed on leaves and they nibble at the edges causing ragged edges. That's about it for the adult beetles, on their own this pest would not be a cause for concern. You are unlikely to see the adults because during the day they are camouflaged against the soil surface and often hide in debris just below the surface.

Inactive during the day they come to life at night when they eat the edges of leaves. If you suspect wine weevil damage take a trip out to your plants an hour or so after dark with a torch. The beetles play dead if they suspect they are being observed but you will see them on leaves and nearby quite clearly if they are there. They are most commonly found from April to early August and are about 10mm long (just under half an inch). 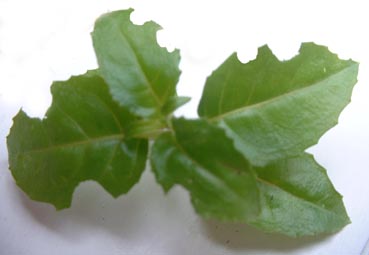 Now onto the grubs which do all the damage. Unless you inspect the compost, the first symptom you will notice is that the plant appears unhealthy and your first thought will be lack of water. Soon after the plant will start to die and at this stage if you lift the foliage, in all likelihood it will come out of the compost with almost no roots attached at all, the grubs have eaten them. The grubs will have begun eating the roots from mid August and continue to do so until November when the start to hibernate ready for the warmer spring the next year. 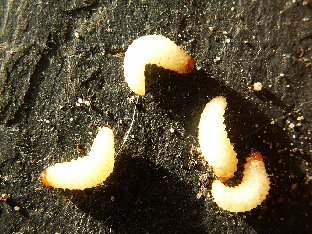 The grubs which eat the roots. do their damage from mid-August to March the next year although winter temperatures slow them down considerably. They are roughly 10mm long (just under half an inch), creamy white with a distinctive brown head and shaped like the letter C.

PLANTS MOST AFFECTED BY VINE WEEVIL


Almost any plant can be attacked by vine weevils, especially those in containers. However, the following plants are most attractive to vine weevils:

HOW TO TREAT VINE WEEVIL


There are three well-known methods to treat vine weevil and it's best to utilise at least two of them if you are to win the battle against this formidable pest.


Two nematodes are effective against vine weevils, Steinernema kraussei (the most common and easy to use) and Heterorhabditis megidis (not so easy to buy and we could not find any in the UK). They are available online and at garden centres. We suggest you read up about them on the internet before buying to ensure they are correct for you. They remain working typically for 6 weeks and may require two applications in a year to ensure complete control. They work very well when used for fuchsias in pots and containers. Nematodes are an organic solution which has been approved by the Soil Association (see here for details).

Established hardy fuchsias growing in a normal garden environment are rarely attacked by vine weevils because the temperatures and soil conditions are not suited to their life cycles. What normally happens is that fuchsias of all types start off as pot grown plants in greenhouses and other warm structures. It is these conditions which suit vine weevils and it is when the plants are in pots that they are best treated.

Because these nematodes only work within a range of temperatures they are normally only sold from late March onwards. If you plan to use them twice a year then mid April and early September are probably the ideal times. If you use the nematodes only once a year then early September is the best time to use them. The soil temperature ranges for Steinernema kraussei nematodes to work effectively is stated as being 5°C to 20°C (41°F to 68°F) and they attack the grubs not the beetles. However, the temperature range which gives the best protection is 10°C to 20°C (50°F to 68°F).

BUYING VINE WEEVIL NEMATODES - to our knowledge only one "brand" of nematodes are available in the UK for the amateur gardener, Nemasys, which is distributed by Becker Underwood. The effect of this is that prices are very similar amongst the retailers, about £10.00 with postage and packing for a small pack (enough for up to 160 pots). They strictly control the distribution methods and also the equipment retailers have to keep the nematodes in tip top condition.

Nematodes have a very short shelf life so we strongly recommend that you only buy them from established online companies who specialise in garden products or from garden centres. If you see what looks like a bargain be very wary, after all, there is no point in buying cheaply if the nematodes are not in good condition.


The two chemicals available for killing vine weevils are Scotts Miracle-Gro BugClear Ultra Vine Weevil Killer and Bayer Provado Vine Weevil Killer 2. Provado lasts twice as long as the Scotts product. Provado especially is thought to harm bees but you must make up your own mind.

LIFE CYCLE OF THE VINE WEEVIL

When doing battle against a pest such as the vine weevil it's often useful to understand the life cycle which is summarised below. Note that there are no male vine weevils, all are female. Also note that in greenhouses and other warm structures the life cycle timings may vary considerably because the temperatures are higher on average. When fuchsias are grown in a warm environment the soil is capable of supporting the grubs at almost any time of the year. This has a considerable impact on the best times to apply nematodes to the compost of potted plants.

If you have any questions about vine weevils or general comments about this article, use the form on our vine weevil question and answer page. We will get back to you as soon as possible.