By David Marks
Spotted Wing Drosophila (often abbreviated to SWD) is a very mobile fruit fly about 4mm long which lays its eggs under the skin of many soft and stone fruit. The maggots are just about detectable with the naked eye but it is far easier to see them with a magnifying glass.

What makes them so unusual is that the female fly has a tiny saw which it uses to cut into the skin of undamaged fruit and then lays its eggs just under the surface. They were first identified in the UK in 2012 by the National Institute of Agricultural Botany (NIAB).


The first sign will be the presence of the male and female flies. However, because they are so small you are unlikely to notice them unless you are specifically looking for them. The males only, have dark grey spots on their wings. Both are about 3mm long. 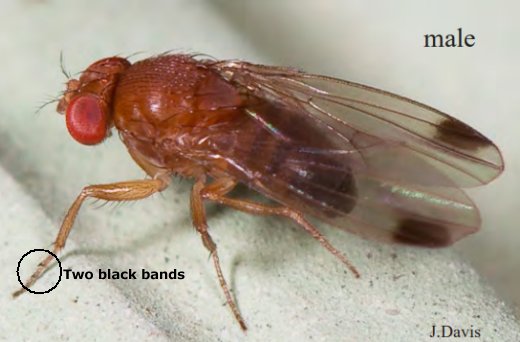 The male fly has a noticeable dark grey spot on each wing tip and two very small black bands on the front legs. The eyes are red and bulging. 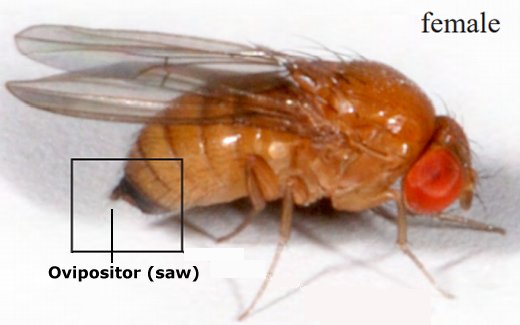 The female fly has the same bulging red eyes but not spots on the wings. It has a small saw (called an ovipositor) at the rear end but you would need a magnifying glass to see it.

The female flies are attracted to semi-ripe and ripe fruits. The main fruits affected are cherries, raspberries, strawberries and blueberries, less frequently they attack stone fruit such as plums.

Drosophila are the only fruit flies which can lay eggs in undamaged fruit. The second point in its life cycle which might attract your attention is when the female cuts into the fruit and lays eggs under the surface. You wont see the eggs but you may notice one or more small holes in the surface of the fruit. See the picture of a damaged cherry below.

The effect on a blueberry is even more dramatic with almost the entire berry being eaten from the inside within 10 days. 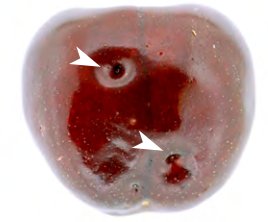 The third and final in the life cycle of drosophila, which you almost certainly will notice, occurs when you eat the fruit. It will have either caved in significantly or there will be small grey larva inside it. The total time from the female laying an egg to it developing into a fully grown fly is less than two months. Astonishingly quick.

HOW TO TREAT SPOTTED WING DROSOPHILA


Spotted Wing Drosophila cannot be controlled 100% and it is also best to use a combination of methods to achieve the maximum control possible. Firstly, try avoid planting fruit trees and bushes next to a compost heap. This is exactly where the fly can overwinter. If possible, also try to avoid planting right next to a hedgerow.

MESH BARRIERS
These are the most effective control method against Spotted Wing Drosophila. However, they don't look pretty and will not be suitable for larger cherry trees. They need to be put in place when the fruit has set and kept there until the fruit has been harvested.

Taking Provado Ultimate Fruit and Vegetable Bug Killer as an example (as at June 2018), the maximum permitted number of sprays per year on cherry trees is three. Also, never spray when bees are actively foraging for nectar etc. You must also allow at least seven days after spraying before harvesting and fourteen days between each spraying. Please check the packet instructions to check these limitations.

With the above paragraph in mind we recommend that the first spray occurs either as soon as you notice damage to any cherry on the tree or in late May to early June.