Powdery mildew is easy to identify as a white powder which first appears in spring on young emerging leaves. It looks almost like a fine coating of talcum powder. If left untreated it will affect more and more leaves, sometimes fruit and even small twiggy growth.

This disease can attack a huge variety of plants including fruit trees and bushes, vegetables, ornamental plants, almost any plant with leaves. Although the infection becomes apparent in spring the lifecycle goes back to the previous season.


This fungus can be controlled by good gardening and pruning practices without resorting to chemicals. Understanding the lifecycle of this disease will greatly help in preventing it.

SUMMER
In summer stressed plants and trees become infected, more often than not because of a lack of water. The leaves and buds become infected but in the first summer this is not visible.

AUTUMN / WINTER
In autumn and early winter infected leaves fall to the ground (or remain on the plant if it is evergreen). Here they overwinter until spring, the disease also remains present in buds.

SPRING
When the weather begins to warm up, the spores on buds, dropped leaves and vegetation spring into life. A period of only one day with the correct conditions (damp and a temperature of 50° F to 59° F /10° C to 15° C) is all that it takes for the lifecycle to continue at this stage.

Millions and millions of spores are released with light winds spreading them to the buds and leaves of nearby plants. This initial infection is almost unnoticeable but over the next couple of weeks the spores on the infected plant release millions of more spores which then form a white powdery coating on emerging leaves and buds. You now have the classic signs of powdery mildew infection. 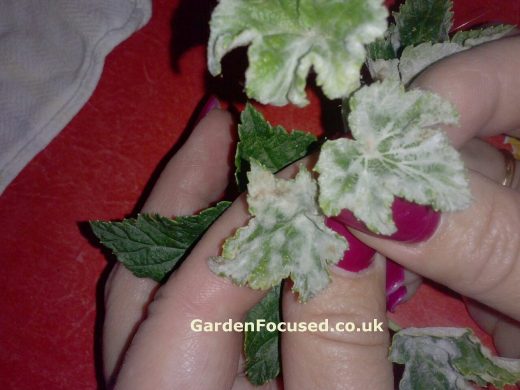 Throughout summer the buds remain infected and affected leaves fall to the ground ready to re-infect the plant / tree next year.


The effects of powdery mildew depend on the severity of the infection. It can range from minor damage on a small proportion of leaves right through to killing a plant if left untreated.

The damage is caused to leaves, reducing their ability to convert sunlight to energy, opening up the plant to other infections as well. Severe cases may result in almost all the leaves dropping off causing the plant to die.

Commonly affected plants and trees include:


The conditions required for powdery mildew to thrive are set out below. Avoiding these conditions will restrict the disease greatly.

The key to avoiding powdery mildew in the first place is to prevent the above conditions from occurring. Water regularly when conditions are dry, plant at the correct spacing and keep the area around the base of the plant free from debris. Pruning of trees and shrubs should be aimed at keeping the centre of the plant open to allow as much circulation as possible.

Regular watering is made a much less frequent task if a mulch is placed on the soil around shrubs and trees which will reduce water loss.

Common varieties of apples which are partially resistant to powdery mildew include Braeburn, Bramley's Seedling, Discovery, Egremont Russet, Gala and Lord Derby. There are no resistant strawberry varieties.


Treatment of powdery mildew can be either by chemical or organic means. It does respond well to organic treatment but if you want to use chemicals then there are several available at most garden centres. Read the label on the chemical pack very carefully because some sprays for powdery mildew are not to be used on edible plants.

The first course of action is to prune out affected foliage including leaves, fruit, flowers and any affected small branches, burn all the pruned foliage. At the same time clean up all fallen debris around the plant and burn it as well. This should reduce the severity of the disease considerably.

Two organic sprays have been proven to work in the treatment of powdery mildew. The first is a mixture of milk and water (one part milk to nine parts water) sprayed on the plants in the morning of a warm and dry day. Don't spray the plants with any liquid in the evening. Apply the spray once followed by a second treatment 2 weeks later. Don't spray more frequently because  you will risk encouraging other pests and diseases.

A second spray, which can be applied in between the milk and water treatment above, is very diluted bicarbonate of soda (also known as baking soda) - one level tablespoon of bicarbonate of soda to four and a half litres / 8 pints of water. Note that increasing the dosage is not good for roses although other plants and trees are unlikely to be affected by a small increase.