First we need to get the naming of this pest correct because it is known by several names. Potato eelworm is the most common but many refer to it as potato cyst nematode.

To confuse matters even further it has two different Latin names. The official accepted name is Globodera pallida (white coloured) / rostochiensis (golden eelworm) - the key difference between the two being the colour of the pest. This pest affects both potato and tomato plant roots in exactly the same way.

HOW TO IDENTIFY POTATO EELWORM

The symptoms of a potato eelworm infestation are not very clear when looking at the plants above ground. The leaves will show signs of premature yellowing in patches and in general the plant won't look as healthy as it should. That's it as far as above ground appearances go.

The only way to identify the potato eelworm is to dig the roots up and examine them with a magnifying glass or under the microscope. The picture right (courtesy of FEDAGA) is magnified and shows the cysts containing eelworm eggs on a potato root. They can also just about be seen by the naked eye. 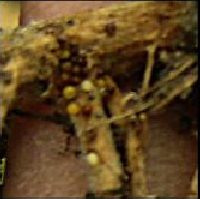 The cysts and eelworm most often occur in groups at the junction of roots. They are round and the colour varies from brown to light yellow. Many gardeners believe that damaged potatoes, with holes in them, are caused by eelworm but this is not true. They feed on the roots NOT the tubers. If your potatoes have holes in them, suspect slugs or cutworm.

When looking for potato varieties resistant to eelworm the key problem is to identify which variety of eelworm (Globodera pallida or Globodera rostochiensis) is affecting your potatoes. In general terms if you draw a line half way through Yorkshire and Lancashire, those south of that line will most likely be affected by Globodera rostochiensis whereas those north of that line are likely to be affected by Globodera pallida.

HOW TO PREVENT POTATO EELWORM

An interesting fact which is key to understanding prevention of potato eelworm is that they hardly move, one metre a season maximum. Neither are they airborne or water borne. They are introduced into the soil either from infected seed potatoes or from soil picked up elsewhere, often on shoes and and boots.

Step 1 therefore for prevention of this pest is always to buy certified disease free seed potatoes. That statement in itself is difficult to understand because there is no obvious and easy method of determining if seed potatoes are certified and if so by whom. Our advice is to always stick with well known producers of seed potatoes - our supplier is always JBA Seed Potatoes but there are many other reputable suppliers.

Step 2 is to practice crop rotation every year. Potato eelworm can last in the soil for over ten years just waiting to infect your new crop of potatoes, however using a three or four year crop rotation plan will very significantly reduce their numbers.

Step 3 is to plant varieties which are resistant to eelworm. No variety is completely guaranteed to resist eelworm attacks but some are very much better at it compared to others. In general early varieties have best resistance with later varieties being more prone to this pest. Potato varieties which have shown significant resistance include:

Step 4 is to scrupulously remove and burn all foliage, roots and remaining potatoes at the end of the season. When you remove roots it's a good idea to do so carefully and place them gently on a piece of plastic. Then remove and burn the roots. The reason for this is that you want to prevent eggs dropping back into the soil.

HOW TO TREAT POTATO EELWORM

There is no cure for potato eelworm, your only option is to dig up all traces of the plants and tubers then destroy them by burning. Prevention and minimising the effect of this pest are your only options. The potatoes are still edible although we advise examining them after peeling, before cooking and eating.