This article is aimed at identifying and treating codling moths which attack apples however they also attack pears and to a lesser degree walnuts and quince.

It's not the moth stage of this pest which damages your apples it's the caterpillar stage of its life which burrows into your apples. Once you have apple trees with codling moth then you will have your work cut out to eradicate them but the measures set out below will give you a fighting chance.

The codling moth itself is just under 1cm long, brownish in colour with copper coloured tips to its wings. To be truthful you would be lucky to notice this moth in a garden environment let alone kill enough of them by hand to make any difference. One key reason for this is that they tend to fly only at dusk and in the evening when light levels are very low.

When you cut open an apple which has or has had this caterpillar in it you will see a brown tunnel leading from the entrance hole to the central area of the apple. If the caterpillar exits via a different route the hole will be even more extensive. The remainder of the apple will be untouched and indeed is still very edible. 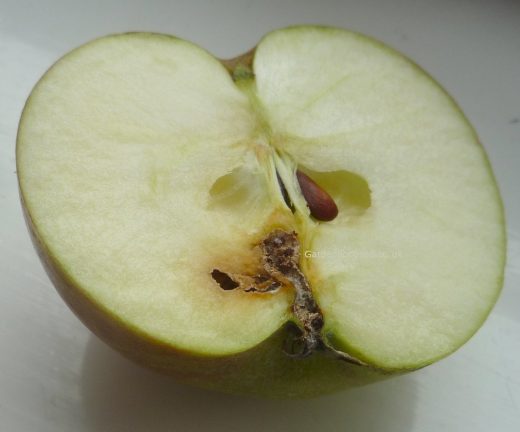 LIFECYCLE OF THE CODLING MOTH

Understanding the life cycle of a pest is always helpful in trying to eradicate them but in the case of the codling moth understanding their lifecycle is key to any treatment.

SUMMER
The lifecycle starts in June, occasionally as early as late May, when adult moths emerge from the cocoons where they have been over-wintering. The moth is about 1cm long, mainly light mottled grey and brown with copper coloured tips to their wings. They need to mate in order to lay eggs and their mating requirements, as far as temperature is concerned, are very specific. The temperature at just before sunset (when they fly around) needs to be 17°C / 63°F or above for the Codling Moths to mate.

This level of temperature generally occurs in the UK around the beginning of June. However it varies significantly depending on where you live in the UK and the weather at that time of year. Once mated, they lay their eggs (average about 45 eggs) on young fruit and sometimes leaves. The eggs are tiny (1mm at most) and almost impossible to spot with the naked eye.

The eggs take about two weeks to hatch and they emerge as pink / light brown larvae which immediately seek out a growing apple fruit. They burrow under the surface of the skin and gradually, over a period of about four to five weeks, eat their way through the flesh of the developing apple. When they are mature they tunnel their way out of the apple, sometimes using the same entrance hole but often through a new hole.

At this stage of their life they search out a site where they can spin a cocoon around themselves with the intention of overwintering. They tend to pick crevices in the bark of the tree or in the ground at the base of the tree.

If the weather is good at this stage many will develop into moths before the end of the summer, mate again and lay more eggs. Depending on where you live in the UK and average temperature, there can be up to three occurrences of this lifestyle stage although only one or two is more normal.

AUTUMN WINTER
The larvae spend the autumn and winter in their cocoons waiting for the next spring / summer when the whole life cycle repeats itself.


The damage caused by Codling Moth is easily identified, unsightly holes in the flesh of apples. The problem with this pest is that the damage can sometimes only become evident after you have bitten into the apple, a very off-putting experience! This damage aside though the Codling Moth does little other damage to an apple tree.

The section below on getting rid of Codling Moth is necessarily short because once an apple has been been attacked by this pest there is no cure. Therefore all your efforts should be concentrated on preventing and or minimising an attack. Both chemical and organic methods are discussed in detail below.

CHEMICAL TREATMENTS
This can be very effective at preventing these pests from attacking your apples but the timing of applying the spray is key. The aim of spraying the trees is to kill the eggs when they laid by the moths. The spray will have no effect before this stage and neither will it be effective after the eggs have hatched and start burrowing under the skin of the apple.

General weather conditions and your specific local weather both affect when the adult moths emerge and lay eggs. As a very general rule chemical sprays should be applied in the middle of the third week of June.  This should be followed up by a further spray three weeks later. In warmer areas apply a week or two earlier and in cooler areas apply the spray a week later. There is however a more accurate method of detecting when best to spray and that is discussed in the paragraphs below.

First however the spray is expensive and very difficult to apply to large trees. It is probably only useful to the amateur where they have manageable sized trees. Try Westland Plant Rescue Bug Killer for Fruit and Vegetables which is systemic. It is approved for use on apple trees and some (but definitely not all) vegetables. The other spay we know of is Provado Ultimate Fruit and Vegetable Bug Killer from Bayer. This contains Deltamethrin which is a man made chemical that mimics a naturally occurring substance. Both are believed to adversely affect wild life to varying degrees so use them only if you have investigated them yourself.

One tip to reduce damage to bees is to never spray apple trees for Codling Moth when the apple trees still have blossom on them. Once the blossom has fallen then bees will not be attracted to the trees.


Use codling moth traps to identify the best time to apply chemical sprays. There are traps designed purely to trap and kill the moths but in general these are not very effective unless used with other methods.

Pheromone traps give off the scent of female Codling Moths and this attracts adult male moths. The male moths will stick to the base of the trap and these can be counted to identify very accurately when to spray. There are several traps of this type available online and at garden centres, just make sure to buy the pheromone type. We can recommend the Agralan Codling Moth Trap because it's proven to work, is designed not to damage birds and the instructions for using it are excellent.

The basic idea behind these traps is that when a specific number of moths have been trapped then it's time to spray. They will of course also kill some male Codling Moths but not in sufficient numbers to have much effect. The traps (one for up to four trees is normally sufficient) should be put in place from early to mid-May.

ORGANIC METHODS
Regular clearing away of fallen leaves, young apples and other debris around the base of the tree will help greatly to reduce the Codling Moth population. Firstly, they often overwinter in leaves and debris and secondly removal will allow predatory birds and insects to eat the remaining ones.

The second easy preventative measure is to provide a man made hiding place for overwintering pupae. A piece of corrugated cardboard tied around the main trunk of the tree provides a highly attractive environment for overwintering pupae. Remove the cardboard every month or so (every couple of weeks from early July to late September) and burn it to destroy the pupae. Reapply new cardboard tied round the trunk.

The above method works particularly well with apple trees which have a smooth bark but is less effective where the tree has rough bark which has lots of crevices. With rough barked trees make sure to remove any debris and peeling bark form the tree to minimise overwintering places for this pest.

Inspect growing apples for signs of Codling Moth. Sometimes this is very difficult because they tend to enter the fruit at the bottom where there is already some debris and natural growth left by the blossom. But often small pin head size holes can be seen in apples sometimes surrounded with brown material. These apples are beyond redemption so remove them and destroy which will also stop the next generation of this pest developing.


Once the apple has Codling Moth inside it there is no cure. However, the unaffected parts of an apple are perfectly edible so judicious use of a knife can still give you a fair portion of the apple to eat.
COMMON PESTS AND DISEASES
Canker