By David Marks
This article is specific to canker of apple and pear trees because they are by far the most common victim of this fungus. It can however also attack mountain ash, whitebeam, rowan, poplar, hawthorn and willow. Identification and treatment is the same whatever the variety of tree.

The bark of a healthy fruit tree is sufficient to prevent an attack of canker. However, whenever the bark is damaged by pruning or attack by disease it offers the potential for the spores of canker to enter and establish themselves.

If you can see a diseased area of bark on your tree then suspect canker especially if it is where a branch has previously been pruned. The bark will be split and slightly sunken at first - the sunken area will become larger as the disease progresses. The disease attacks the fleshy wood beneath the bark first so if you peel off a small bit of bark and see brown diseased wood below then your tree has canker. Canker often appears as ring-shaped cracks in the bark.

Another key identifier of canker is the presence of small areas of spores on the bark or where it is cracked. The spores form into small patches with a slightly gooey appearance which are red in summer and early winter but creamy coloured in spring.

LIFECYCLE OF CANKER IN FRUIT TREES

Canker enters into the tree through damaged areas of bark. Bad pruning techniques, animal damage and even poorly placed supports can all cause the initial bark damage. A bug called woolly aphid can also cause bark damage. Another common site of infection is the very small scar which is caused in bark when the leaves fall in late autumn and winter.

AUTUMN / WINTER
In autumn and early winter, especially if the soil and general conditions are damp, the spores enter the flesh of the tree through areas of broken bark. They are spread by wind and rain.

SPRING
When the temperature increases in spring the spores multiply and begin to damage the flesh of the apple tree. Initially no external damage may be present. In spring the spores can sometimes be seen as creamy white small spongy areas in and around cracks in the bark.

LATE SUMMER AND EARLY AUTUMN
The canker further damages the tree and new spores, typically now seen as reddish in colour, will be spread by the wind to new sites. The spores can travel several metres on the wind and infect nearby trees.


If left untreated canker will eventually kill an apple or pear tree. Even before it kills the tree it will reduce the yield of fruit. Probably even worse, if you have more than one fruit tree, the spores will more than likely infect the other trees as well and the infection can pass from apple to pear trees and vice versa. So, it's important to identify and treat canker as early as possible. See the picture below for typical signs of canker.


There are three key actions you can take to greatly reduce the risk of canker:

CORRECT PRUNING
See our page on pruning apple trees for an in depth description of when and how best to prune apple trees and this page for pruning pear trees. As far as avoiding canker when pruning each year is concerned, the key point is to always sterilise pruning equipment before pruning a tree and afterwards. If pruning more than one tree sterilise the equipment when finishing with each tree. Properly developed canker is easy to spot but in its initial stages there may be very few or no external signs.

Use sharp equipment so that cuts are clean and with no remaining jagged edges. Make cuts to branches so that rain water can easily drain away and not collect in small pools.


No variety of apple / pear tree is completely resistant to canker but you can improve your chances of avoiding this disease by growing ones which are proven to have some degree of resistance. If the conditions in your area are damper than normal then this is even more important. Varieties which show resistance to canker include the following:

Pear tree varieties which show some resistance to canker include Concorde and Conference.

HOW TO TREAT CANKER


No chemical control with pesticides or eradication of canker is available. There is a small amount of evidence that spraying with a copper fungicide such as Bordeaux Mixture can prevent a canker infection from spreading (but not cure it) although this is not proven.

The copper fungicide Bordeaux Mixture has previously been recommended as a spray to prevent canker in fruit trees. However it has now (or soon will be) withdrawn from sale in the UK. Currently there are no alternatives which have been scientifically proven to be anywhere near as effective as Bordeaux Mixture

Various alternatives are suggested, for example aspirin solution or milk, but none have been proven to have any effect.

The only proven method of treating canker is to remove all infected wood and bark by pruning it out. If the canker is in a stem or branch this means cutting off the branch or stem below the site of infection into good clean wood. Infected wood is brown whereas clean wood is creamy green. Leave not one ounce of infected wood on the tree if you want to eradicate canker completely. Sterilise tools before and after pruning of this type and burn all pruned wood and foliage - ALL of it!

If canker affects the main trunk of the tree below a certain level it's clearly not an option to prune off all the tree. In this case you have a stark choice, either dig up the tree and start again with a new one (the option a commercial orchard would take) or to perform surgery on the trunk.

Rather than go into endless words on how to this we have found an excellent and instructional video (see end of this page) from Huw's Nursery on how to this. See also the picture below of canker affecting the main trunk of an apple tree. 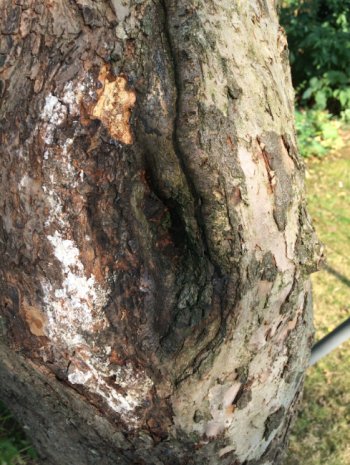 We would disagree with one aspect of the video however, the sealing of the site of pruning with a sealant. Recent evidence exists which indicate that it is best to leave the wound open. It may sound a bit unusual but all the evidence indicates that trees heal wounds better if they are left open.

BEST TIME TO TREAT CANKER IN APPLE AND PEAR TREES


The video below doesn't mention it but it's best to perform the pruning for canker is in a dry spell during the dormant period for apple and pear trees (mid November to mid-February). Pruning out diseased wood at this time of year will minimise the risk of spreading the canker to other parts of the tree and other trees nearby. Canker is dormant during this period so watch the weather forecast, bide your time and wait for that elusive dry spell.

Although it's best to prune out canker in the dormant period, inspect your apple trees for canker during the year. If you notice an area that needs to be treated then spray it with red paint so that it can easily be located when return later in the year.
OTHER PAGES OF INTEREST
Pear Pest and Diseases

How to Grow Pears

How to Grow Apples