Aphids can be defined as a small bug which feeds on the sap of plants. Two common examples of aphid are greenfly and blackfly although there are hundreds of different types of aphid. As adults they are about 5mm long.

Aphids damage plants in two ways both of which are visible by the naked eye. The first damage is caused by the insects feeding on the sap of young shoots. This reduces the vigour of plants but is seldom enough to kill them. The second damage is caused by the sap which the aphids excrete. In itself this is not a problem but it attracts diseases which can often inflict serious damage.

By David Marks
To identify an aphid attack, look on the underside of young shoots. If aphids are present they will appear as small insects coloured grey, black, green or white. The affected leaves may also curl inwards as a result of the attack. 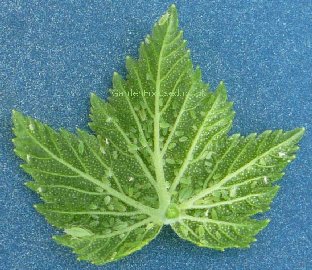 Ants are also commonly present when aphids attack because they "farm" the aphids, protecting them from predators and feeding on the sweet liquid they excrete. The picture above is of greenfly on a blackcurrant bush leaf in early May during a particularly bad year for aphid attacks. Click on the picture to enlarge it and see more clearly. As the aphid attack worsens the leaves begin to curl inwards inwards and can turn brown and crinkly at the edges.

See below for organic and natural ways of treating aphids which are the preferred solution. Chemical sprays are available as two types, the first being a contact spray. This is generally safer compared to systemic sprays but relies on the spray coming into contact with the aphid in order to kill it. Many aphid attacks cause the leaves of plants to curl inwards and effectively protect aphids from contact sprays. In addition, the vast majority of aphids will be on the underside of leaves making contact spraying very difficult.

The second chemical solution for aphids is a systemic spray and there are several brands of these available at garden centres and diy stores. A systemic spray works because the chemicals are absorbed by the plant and when aphids feed on the plant they are poisoned. Of course, this also means that the liquid in the plant is tainted with the same chemical used to kill the aphids. Be very sure to read the labels on systemic insecticides extremely carefully, some are dangerous when sprayed onto fruit or vegetables which are then eaten. 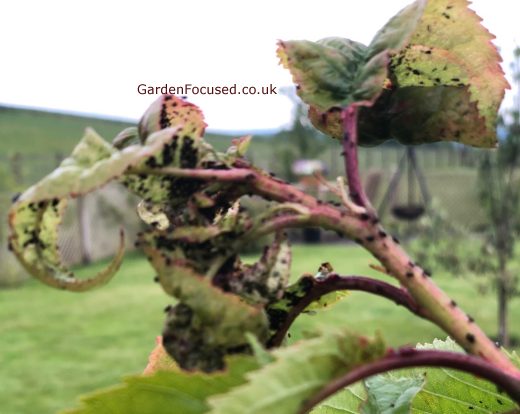 Blackfly on a cherry tree

The first line of organic defence is to keep a good watch on your fruit and vegetables and squash any aphids you see with your fingers before the attack gets out of hand. The aphids will be most easily seen on the tips of new shoots and the undersides of young leaves. Leaves which are curling inwards are a definite sign of aphid infection. Often, they are initially not visible with the naked eye but a leaf curling inwards is a sure sign of them being there. Run your finger gently over the the surface of the underside of the leaf and you will be killing them.

The truth though, is that an aphid attack is probably far more advanced than just those aphids you can see with your eyes. Take the picture a few paragraphs above as an example (click it to enlarge it and see more clearly). When we took the photo it was clear that there were some greenfly on the leaf, after all that's why we took the picture. But when we looked at the picture later it was amazing how many more aphids we could see on the enlarged photo compared to just using our eyes at the time.

Try it yourself with any half-decent digital camera and you will see exactly what we saw. The key point here is not only to look out for aphids but at the same time look for the other signals of an attack which are young leaves curling inwards and often a glossy appearance on the top of leaves which is the gooey secretion form the aphids on the leaves immediately above.

Our non-chemical method of treating aphids is a three step approach and it really does work, follow the steps below.

STEP 1
Use your fingers to squash as many aphids as you can. To do this gently run your thumb and forefinger over leaves with the leaf in between them. Start with the curling leaves and then go on to those which appear unaffected as well. Gentle pressure will squash the aphids and get rid of many of them. Yes it does appear a bit messy but after a minute or so you just wont notice and you will be killings masses of the ugly aphids!

STEP 2
This step is dependent on what plant has been attacked. The idea is to gently shake the plant without damaging it. Even delicate plants like basil or tomatoes can be shaken without causing any damage. This will result in many of the aphids simply falling off and you will be surprised how many do fall off. You can prove this by placing a dark piece of paper on the ground below the plant before you shake it. This has the added advantage that you can collect them on the paper and then tip them well away from where they can do any further damage.

STEP 3
Spray with diluted washing up liquid (a couple of drops in a litre of water). The spray may well wash off many of the aphids and it also kills others. Insecticidal soaps work even better and these are readily available online and in garden centres.

Repeat the above process four or five days later and after that you will notice a huge reduction in aphids and the damage they do.

The second line of organic defence is to encourage insects which will eat the aphids and surprisingly there are lots of them about. Some plants encourage insects which feed on aphids - these include lace wings, hoverflies and some birds. Encourage nettles in a patch of your garden and plant other insect friendly plants such as marigolds, sedums, foxgloves and similar plants. The insects attracted will have a clear effect when they eat the aphids.

An often asked question is do ants farm aphids? The answer is most definitely yes. Ants benefit from aphids by eating the sugary liquid they secrete and ants are very organised animals. They farm in several ways. First, they restrict their movements so that the aphids are concentrated in particular areas, this results in the sugary liquid being concentrated rather than spread over the entire plant.

The second tactic ants adopt is to fight off predators such as ladybirds. Ants act in a very organised way and as a group they are quite capable of biting and harassing aphid predators to frighten them away.

The third, rather gruesome tactic that ants adopt, is to prevent adult aphids from flying away by biting off their wings. So, ants are bad news if you are fighting an aphid attack because the ants are fighting to protect the aphids.